Pardoned by Trump, D'Souza makes a ludicrous tribute to his greatness. But the real story here is right-wing decay 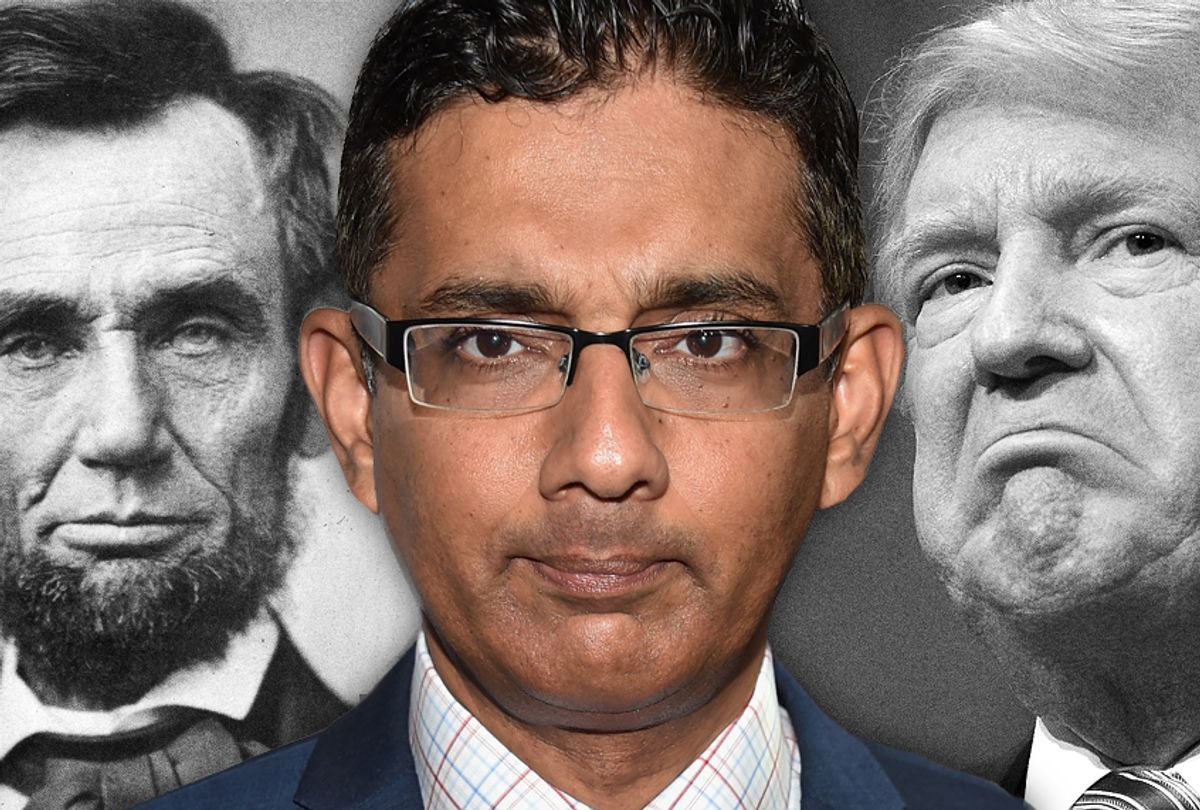 In recent weeks, we have learned that Donald Trump pardoned right-wing pundit Dinesh D’Souza, who had pled guilty to making illegal campaign contributions using straw donors in 2012. We also learned that D’Souza has a new movie that will open in August, "Death of a Nation," which compares Donald Trump to Abraham Lincoln.

“'Death of a Nation' draws a provocative analogy between Lincoln and Trump,” D’Souza explained. “Not that they’re the same people, but that they’ve fallen into the same situation. Not since 1865 have Democrats so dramatically refused to accept the outcome of a presidential election.”

Yes, that’s right. According to D’Souza we are witnessing parallels today between the current Democrats and the Civil War-era Democrats who supported the Southern slave-holding aristocracy. Forget that this parallel makes absolutely no sense given the historical transformation in party politics. According to D’Souza, he has (once again) uncovered a huge conspiracy that threatens the very future of the nation — the fact that the Democrats have always wanted to destroy national unity. The movie poster eerily offers an image of a man’s face with Lincoln’s features on the left and Trump’s on the right. It is quite possibly the most brazen effort yet to legitimize Trump as the rightful leader of this nation.

Some critics have noted the coincidence of a pardon and a movie likening Trump to Lincoln. Others have suggested that the pardon is an omen of pardons to come and proof of Trump’s complete disregard for our electoral process.

The big story here, though, may be that D’Souza has outdone himself with this new movie — and that’s saying a lot. Prior to this new film D’Souza had released a number of films including: "2016: Obama’s America" (released in 2012) and "Hillary’s America: The Secret History of the Democratic Party" (released in 2016). "Obama’s America" was largely considered to be a delusional attempt to portray Obama negatively. Owen Gleiberman described it for Entertainment Weekly as a "nonsensically unsubstantiated act of character assassination. ... In place of an actual documentary, D’Souza employs 'pseudo-scholarly leaps of logic' to invent an imaginary character.” In Salon, Andrew O'Hehir characterized it as "free-range amateur psychoanalysis" designed to depict Obama as "a Manchurian candidate preloaded with a Frantz Fanon-style software program aimed at destroying America."

With "Hillary's America," D'Souza did himself one better, because in that film he combined a character assassination of Hillary Clinton with an effort to characterize the current Democratic Party as the party of the KKK and fascism. As Peter Sobczynski wrote for RogerEbert.com, “The film is less a coherent narrative than a compendium of slanders, innuendos, cherry-picked facts, blatant omissions, stuff taken almost directly from his earlier documentaries, terrible historical reenactments, a couple of interviews that convey additional information of a highly dubious manner and ironic clips from movies that you will wish that you had watched instead of this one.”

And this is to just describe his movies. D’Souza has made a habit of using Twitter to share increasingly outrageous ideas that are openly racist and often based on delusional conspiracy theories. He once tweeted a famously scandalous message suggesting that Obama was ghetto. Shortly after being released from incarceration he tweeted an image of a young Hillary Clinton, then a recent Wellesley College grad, with this message: "Look closely at this Hillary photo; isn't that a Confederate flag behind her on the bookshelf?" The photo had been doctored, but that didn’t stop D’Souza from sharing it. More recently, he took to Twitter to troll the teen survivors of the Parkland shooting.

It is important to recall that D’Souza was not always the unhinged, ultraconservative, Trump-loving racist he is today. While he did start his pundit life off with some fairly extreme stunts — including an anti-affirmative action piece written in "Ebonics," after graduating from college, he typified traditional, neoconservative values. As Vox’s Dylan Matthews explains, D’Souza was once a member in good standing of American conservative intellectual life and served in the Reagan administration. In one of his early books, "Illiberal Education," for example, he attacked the rise of multiculturalism on college campuses. While the book was filled with inaccuracies and dodgy arguments, he made a valid point when he argued that it was a mistake to highlight racial inequality but ignore class privilege in college admissions.

He was also the guy that Bill Maher happened to be talking to on his ABC show “Politically Incorrect” on Sept. 17, 2001, when Maher made a remark that cost him his show. Recall that in the days after 9/11, President George W. Bush had made it a habit to describe the terrorists who led the attacks as cowards.

D’Souza rejected that label: ''Look at what they did,” he said. “You have a whole bunch of guys who were willing to give their life; none of them backed out. All of them slammed themselves into pieces of concrete. These are warriors.'' To which Maher replied: ''We have been the cowards, lobbing cruise missiles from 2,000 miles away. That's cowardly. Staying in the airplane when it hits the building, say what you want about it, it's not cowardly.''

Maher lost his show on ABC; D’Souza received no fallout. The story matters, though, not for the different career but rather because it makes clear that D’Souza had been willing to disagree with Bush and with the majority of conservative commentators at the time.

In those days, D’Souza was part of a conservative pundit class that at least occasionally made valid points the left needed to hear. These were also the days when the left and the right could productively engage in debate. Sure, there were fringe characters, but they did not dominate the mainstream narratives tied to party politics.

In case you haven't noticed, those days are long gone. Anyone paying attention knows that we aren’t just living in a moment of incompatible echo chambers. We are living in a moment that offers up political debate as blood sport, where alt-right pundits compete to see who can be the most outrageous while those on the left compete to see who can be most outraged by what they say.

Yet there is something in the story of D’Souza’s career that seems to offer an interesting reveal to this development.  Because in a very basic way D’Souza has morphed from a pseudo-intellectual neoconservative to a total wack-job who even stages his own significance, as seen in this tweet where he has clearly placed his own book on top of others in a display.

At one point in his career D’Souza presumably hoped to influence public debate; now he just wants to profit from saying the most ridiculous and incendiary things he can. The more outrageous he has become, the more profitable his career.

The story of Dinesh D'Souza is a story of how the fringe has become the mainstream. It would be convenient to blame that transition on Donald Trump, who is the poster boy for profiting from outrageous bluster. The D’Souza story, though, should remind us that well before Trump's rise to political power, this country was already veering toward the normalization of inflammatory, conspiracy-theory thinking.

Trump may be the enabler-in-chief for these wack-jobs but he isn’t their ultimate source. And while the confluence of Trump’s pardon and D’Souza’s new film is too obvious to ignore, this is not really a story about Trump. It’s a story of how the conservative pundit class in this country surrendered to madness, allowing delusional far-right thinking to capture the public’s attention and dominate the political narrative.

Birth of a "Troll Nation"

Salon's Amanda Marcotte on how the American conservative movement descended into bigotry and conspiracy theory.