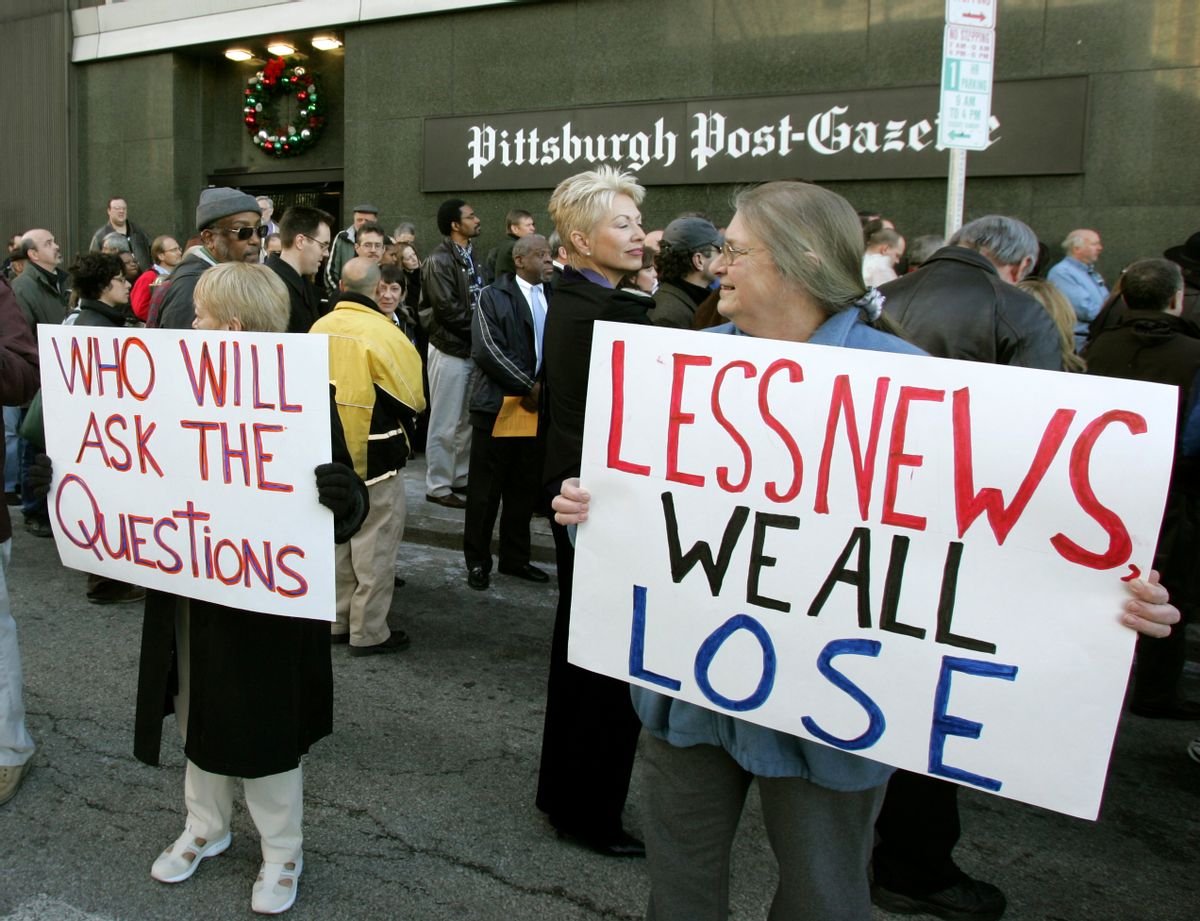 The biggest threat to U.S. democracy is not Russian meddling or gerrymandering or the man occupying the Oval Office. It's the left's campaign to end free speech, according to right-wing media.

That's what made the Pittsburgh Post-Gazette's decision to fire cartoonist Rob Rogers all the more baffling, as its purported reasoning for terminating him was his relentless desire to paint President Donald Trump as a danger to the country.

The 25-year veteran of the Pennsylvania newspaper announced Friday he was fired in an op-ed piece for The New York Times.

"I blame Donald Trump," he wrote in the article. "Well, sort of."

"I should’ve seen it coming," Rogers continued. "When I had lunch with my new boss a few months ago, he informed me that the paper’s publisher believed that the editorial cartoonist was akin to an editorial writer, and that his views should reflect the philosophy of the newspaper.That was a new one to me."

The Pittsburgh Post-Gazette has undergone a significant shift in recent years. The once-liberal newspaper considered endorsing Trump in the 2016 election, as publisher and editor-in-chief John Robinson Block became more and more involved in the newsroom. Block commissioned a 2018 editorial, for example, that provided cover for Trump's abhorrent "shithole" comment on Haiti and African countries.

His peculiar presence reached the cartoon section, where Rogers found some of his drawings censored by Block.

Rogers, who has a reputation of punching to his left and right, did not allow this to deter him. He still produced cartoons that held the president accountable.

Things with my paper are still unresolved but I decided to draw this one for syndication only. Enjoy. Summit cartoon: https://t.co/gGOKCq5thp #TrumpKimSummit #KimJongUn #Trump #TrumpKim #nukes #HumanRights #NorthKorea pic.twitter.com/9eA1gnnfzO

On Thursday, Rogers' reign as the editorial cartoonist for the Pittsburgh Post-Gazette came to an end. He drew the last straw.

This is the cartoon that got @Rob_Rogers fired after 25 years working at the Pittsburgh Post-Gazette. Spread it around like a lice outbreak at a pre-k. pic.twitter.com/XJL52csPa1

Rogers started his career at the now-folded Pittsburgh Press. He has won the Thomas Nast Award from the Overseas Press Club, the National Headliner Award and has been a Pulitzer Prize finalist.