Should Father’s Day call for a steak, or ice cream eaten on the couch, then all the better — tastes are personal 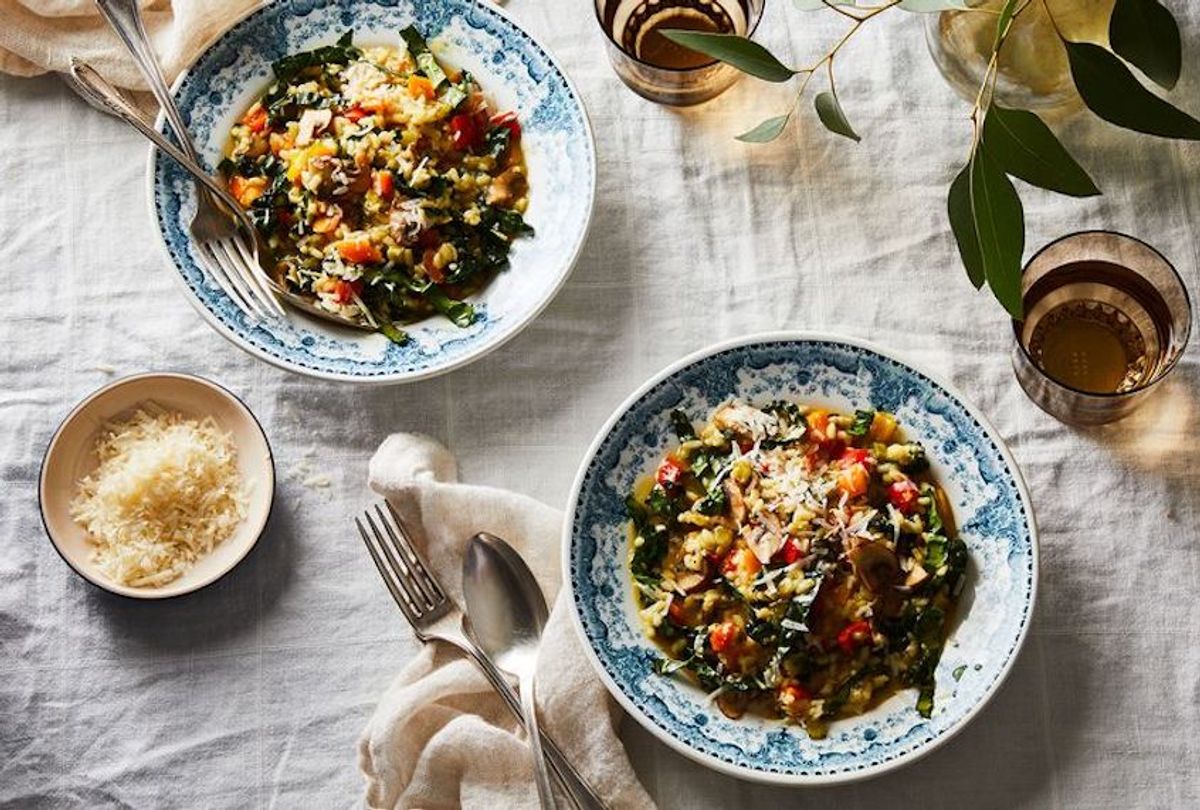 Father’s Day lands on the calendar like a comet, trailing T-bone steaks and beer in its fiery wake. It’s an early summer Kool-Aid man crashing through your living room wall shouting about fishing. The holiday practically turns your grill on for you. It hits you a month out and wants to know what kind of EPIC gift you’ll be getting your EPIC dad. If in May, Mother’s Day is brunch and breakfast in bed, then Father’s Day requires — no, demands — something scorched over hot coals, juicy, bloody, dripping.

This theater, which places men in an outdoor kitchen tending a fire in a Kiss the Cook apron, never really applied to my dad. When I think about my dad — who ran a restaurant for twenty years — the flavors that come to mind are delicate, crystalline broths; torpid simmers, tomato sauce suspended over a low flame for whole afternoons; the flake and grain of a fish steamed under salt.

At 25, my father left Sardinia, the island in Italy where he grew up, for New York City. He wanted bigger lights and bigger challenges. Could this new, much smaller, more crowded island give him that? Like so many immigrants, he traded comfort and familiarity for unknown promise. The brackish breeze of his seaside town became gusts that shot down 6th Avenue and lifted the tails of his coat. The tomatoes in New York may not have tasted as sweet as those from home, but opportunity is a powerful flavor enhancer.

Far from what he knew, he sought ways to muffle a sense of longing. For some, this abatement can be auditory, like a radio constantly tuned to a familiar station, or visual, like a soccer game playing on repeat. My dad, he’s always soothed quiet homesickness through taste. He learned the flavors of his family and his island from his mom and aunts, women who woke before dawn to start preparing lunch — ravioli bulging with ricotta, lamb braised with celery and carrots — and he packed them in the suitcase of his memory. When US customs asked, he said he had nothing to declare.

On this side of the Atlantic, he logged hours in restaurants — Italian, of course. And after years of working his way down the line and up the ladder, he decided it was time to start his own. With my mom, an American with family in Texas, by his side, they tossed their scarves and reached for their Stetsons and opened an Italian joint in the heart of Dallas. Ciao, ya’ll!

In the food world, there’s no shortage of men valued for a deft hand in the kitchen. Titans of the industry — those that receive recognition — are overwhelmingly male, especially in the restaurant world. Women, on the other hand, are more often, and not always fairly, understood as home cooks. Their aesthetics tend to involve warm hues and cozy granite countertops rather than the assertive steel of the professional kitchen.

In an essay penned for Lenny Letter, Lawson contends that “real cooking is what happens in the home” — and from watching my dad in both environments, I agree. The food he whizzed out of our home kitchen felt closer to him, closer to what he wanted to say — and therefore, they felt closer to us. What his home-cooked food lacked in pretension and precision, it made up for in spirit, earthiness, and portion size.

Once, my father sat down to a soup with fennel fronds floating on the surface and remarked how much he wished he remembered how he made it. My sister and I balked. "Sleepwalk cooking,” we started to call it, wanting to know what that felt like. Nonetheless, it always worked, and every night we would sit to dinner and a story:

"This pasta comes from a group of women who live in the mountains behind my town."

"Your Zia always loved the taste of fresh mint, especially with lamb."

"I used to eat peaches like these until my lips turned numb and my tongue swelled from the sweetness."

These scenes beget a wonder in me, one that eventually led me to work in food, first as a server, then as a cheesemonger, and now as a food writer.

As I got older, my dad started inviting me from the edges of the kitchen to the center. He’d offer me tastes, walk me through his process. He explained why flavors worked together and showed me when they didn’t. We hung orange peels to dry from a wine rack and plucked rosemary from the herb garden in our backyard. Oil, then aromatics, then everything else, he instructed. Recipes, he explained, were helpful, but understanding a basic order of operations was even better.

Risotto is probably the perfect distillation of everything he’s taught me about cooking — that the act should be slow, methodical, contemplative. Ingredients meld best when left to mingle, and a prize, like risotto, is only won after a gentle and deliberate coaxing.

Recently, when he visited me in New York, we made a midday risotto in my cramped Brooklyn apartment. He raided my fridge for crisper drawer veggies and supplemented with a few things from the vegetable market across the street. We surveyed our bounty: some spring onions, a bunch of kale, a handful of sweet peppers and some leftover mushrooms. This’ll do, he said. At the grocery store, I watched him pick up a tiny turmeric root, like an orange pinky finger. He liked the roots knobby texture and, without saffron at hand, felt excited by the prospect of its sun-colored hue. This should do, he said.

I soak up moments of his teaching like the ridges of a rigatoni does sauce. This time, I don’t let him enter his trance alone; I join him. He slices a crunchy green onion as I smash and mince garlic. These pop excitedly in a hot, shallow layer of oil on the bottom of my red Dutch oven. We each tackle a vegetable. He takes the peppers and kale and slices them with practiced precision, his knife galloping across the board like a thoroughbred. I mimic his wrist movements, copy (or attempt to copy) his posture as I chop mushrooms.

The smell of alliums wafts from the pot like cologne as he drops in peppers then the kale stems. They wilt in the heat. Mushrooms join at the last minute. The Arborio rice falls in with the sound of a rainstick and toasts lightly with the vegetables. I stand behind my dad like a shadow, divinating what he needs, I hand him a bottle of white wine that stutters when poured in the pot.

Making risotto is everything I want Father’s Day to be, because it exemplifies my father’s languid, delicate style. Flavor, my dad always taught me, doesn’t need to be a slap, nor should it be.

But this dish, like any inherited recipe, is case specific. Should Father’s Day call for a steak, a beer, or even a half-melted bowl of ice cream eaten on the couch, then all the better — tastes will always be personal. Risotto is that dish for my dad and me. Just like him, risotto releases its wisdom lazily, and only if you assure it constantly that, yes, you’re still paying attention. 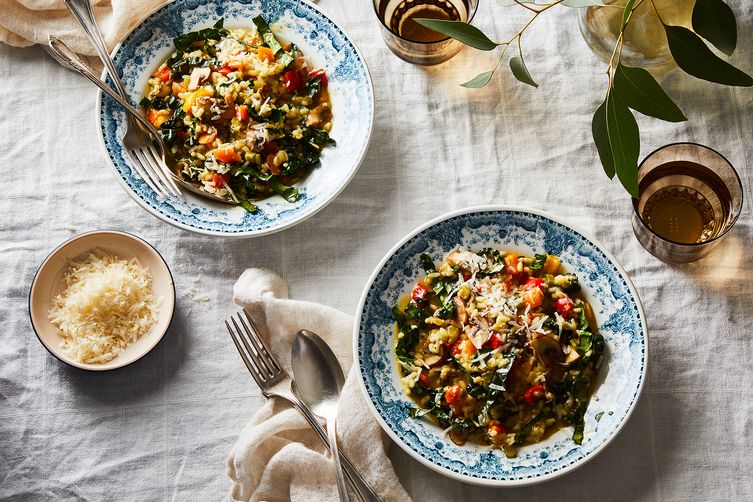 Off the Cuff Turmeric Risotto Recipe (Photo by Rocky Luten)[/caption]