Proving Trump a liar, Democrats are doing everything in their power to ensure children are not split from parents 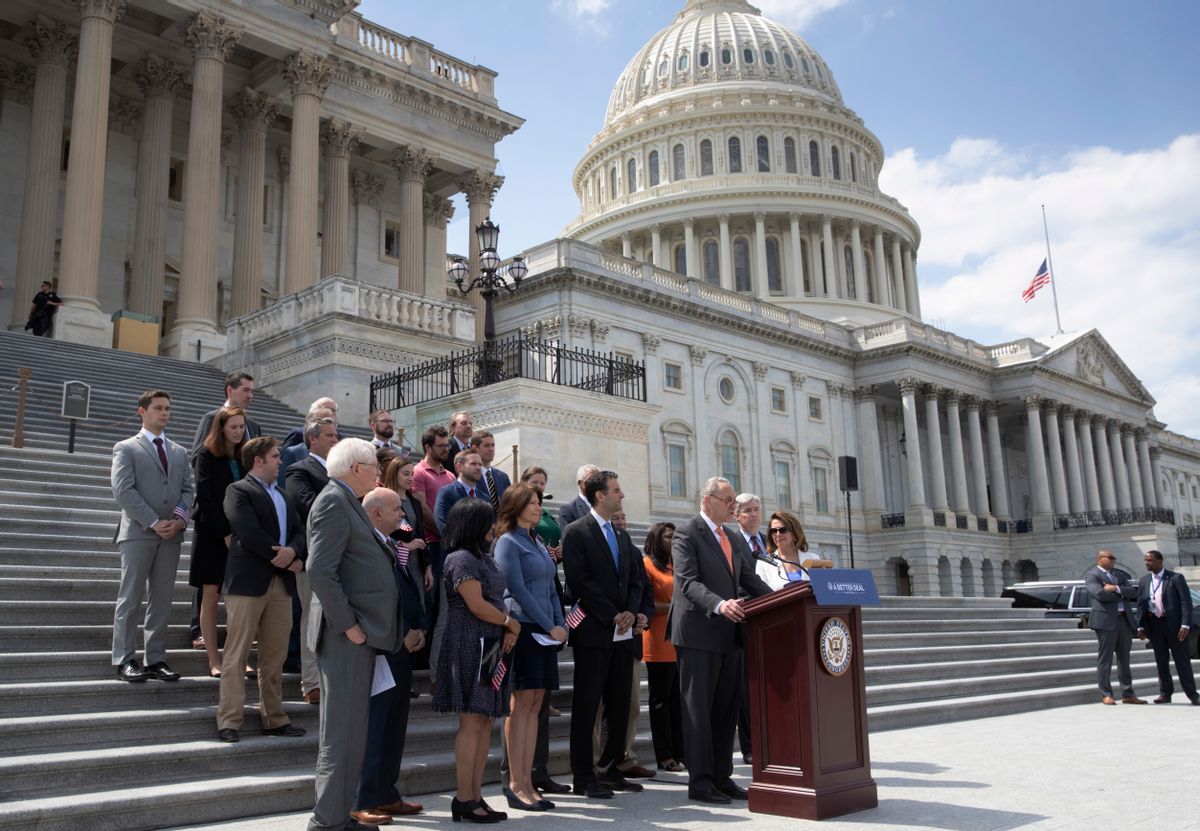 Democrats in the Senate have found 43 members to support the Keep Families Together Act, a bill that will prohibit federal officials from removing a child from his or her parents on the southern border. Not one Republican senator has signed onto the legislation.

Horrifying stories of children locked in cages have rattled the Trump administration, which recently announced a zero-tolerance policy that has resulted in the mandatory detention of migrants caught crossing the border. In spite of this new policy, President Donald Trump and the GOP have gone through great lengths to redirect blame towards the Democrats.

"Congressional Democrats own family separation by repeatedly voting against common sense fixes to our immigration system that would make American communities safe," the statement said.

As evidence of this, the RNC pointed to Democrats blocking legislation that would have cracked down on "dangerous" sanctuary cities and also their vote against Kate's Law, a bill that would deport undocumented migrants with a lengthy criminal history.

Despite this misdirection campaign, Democrats have acted swiftly to override Trump's cruel and inhuman policy. Thirty-plus Democratic senators have sponsored the Keep Families Together Act, and they are desperate for some Republicans to join them in support.

UPDATE: 43 senators now support our bill to bar children from being taken from their parents at the border. We still need a Republican senator to join. If you’re represented by a Republican senator, please ask them to cosponsor S.3036. #FamiliesBelongTogether

Their effort to solve the dire situation at the border contradicts the cynical messaging coming from the White House. It also challenges the common narrative that Congress is inept. The Senate has a reputation of incompetent governing. From the typical Midwest voter to the elite Beltway pundit, Americans tend to paint Congress as an unified mess.

For the issue at hand, however, Democrats have come up with a solution that will end the separation of families, but Republicans continue to sit on their hands. Trump, meanwhile, has repeatedly told the falsehood that the separations are a byproduct of Democratic policy. He tweeted Saturday morning that Democrats can "fix their forced family breakup at the Border by working with Republicans on new legislation."

Democrats can fix their forced family breakup at the Border by working with Republicans on new legislation, for a change! This is why we need more Republicans elected in November. Democrats are good at only three things, High Taxes, High Crime and Obstruction. Sad! — Donald J. Trump (@realDonaldTrump) June 16, 2018

Trump's repeated assertion that Democrats are responsible for the "forced family breakup" can no longer be interpreted as a mere falsehood. It is a malicious lie unrivaled even for this president.

Unlike the Democrats, the GOP has not introduced a single bill that will instantly correct the abusive practices at the border, yet Trump has called on Dems to work with Republicans "on new legislation."

Many people have become wise to the Republican inaction.

This is strange, because I read on Twitter that the two parties are exactly the same! https://t.co/FMLEbrEy7U

If you want my vote next time around @BenSasse and @SenatorFischer your names better be on this. https://t.co/QH1c3k9XHa — Tim Carlson (@thecivilcomment) June 16, 2018

It’s wild there could be sixty senators against this bill. https://t.co/0LkIBUFv2O

Mired by scandals, including alleged campaign fraud and an affair with an adult-film actress, Trump could be facing his most shocking scandal yet as the situation along the southern border continues to deteriorate. The optics has troubled the RNC, which opted to invent outrageous excuses as to why children are being imprisoned.

Some medical experts have called the treatment of migrant children "government-sanctioned torture."

Speaking with The Atlantic, Alan Shapiro, the senior medical director for community pediatric programs at Montefiore Health System, said that stability is "very important for children" and the conditions they are finding themselves in along the southern border is only "ratcheting up the level of stress."

“The ultimate stressor—the ultimate trauma—is being removed from your loving caregiver. On top of that, the child is losing the person who is supposed to buffer that stress,” Shapiro told The Atlantic. “Who are they to turn to, to give them that comfort?”

The children cannot turn to Republicans, who have remained silent as the Trump administration proudly defends its policy, while condemning Democrats for its ill-effects.