For big corporations, wage theft penalties are the price of doing business

Corporations, like Walmart, are guilty of being repeated wage theft offenders 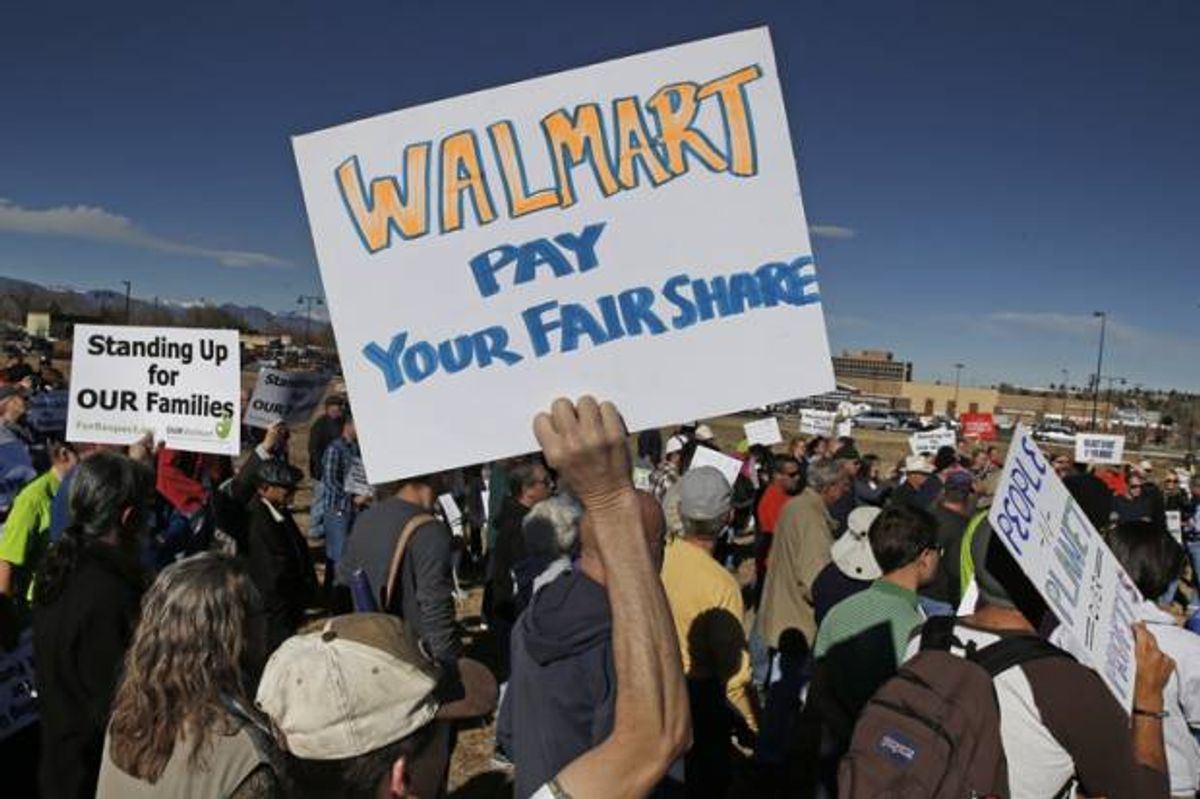 A scathing new report finds that hundreds of major corporations in the United States are repeat wage-theft offenders—committing the violations and then paying the subsequent fines as part of the cost of doing business. Jointly published on June 5 by Good Jobs First and Jobs with Justice Education Fund, the report finds that, since 2000, 450 firms have each paid at least $1 million each in settlements or judgments related to wage theft. And 600 companies paid a penalty in multiple cases of wage theft, indicating that punitive measures are not deterring these companies’ violations. In some cases, the number of settlements and fines was stunning, with Hertz seeing 167 cases since 2000 and Walmart seeing 98 cases and shelling out $1.4 billion.

The report is authored by Philip Mattera and includes a chapter on policy recommendations, written by Adam Shah. Through a compilation of available lawsuits, ranging from January 2000 to the present, Mattera finds 4,220 cases filed against large companies where employers were penalized for wage theft to the tune of $9.2 billion total.

Mattera tells In These Times he was shocked by the number of large companies that were involved in wage theft. “I had thought that wage theft would turn out to be mainly an issue for a limited number of large corporations,” he said. “The fact that it is so pervasive in big business highlights the power imbalance between capital and labor.”

Wage theft is a practice in which companies withhold their employees’ overtime pay, force off-the-clock work, violate minimum wage laws or steal tips. Victims of wage theft range from low-wage workers like cashiers, cooks and security guards to higher-paid positions such as nurses, pharmaceutical sales reps and financial advisors. In the 10 most populous states in the country, 2.4 million workers lose $8 billion annually (an average of $3,300 per year for year-round workers) to minimum wage violations, according to a 2017 report by the Economic Policy Institute (EPI). In 2015 and 2016, a total of $2 billion in stolen wages were recovered for workers by the U.S. Department of Labor, that EPI study found.

The biggest players in wage theft are Fortune 500 companies, like Walmart, FedEx and AT&T, according to the Mattera and Shah report. Five of the top dozen companies heavily penalized were banks and insurance firms, including Bank of America, Wells Fargo, JP Morgan and State Farm Insurance. Mega-corporations account for half of the total cases.

Other top industries where wage theft is ubiquitous are within the business services, insurance and healthcare services—industries that are employed by a predominantly woman workforce. Wage theft also disproportionately affects Black and Latino workers who make up a greater percentage of the workforce within the top ten industries that the report finds are heavily penalized.

The fast food industry should be on the top violators list, according to the Mattera and Shah report. However, high-profile companies like McDonalds run on a franchise model, exempting the corporations from signing checks, which allows them to more easily get away with illegal labor practices, like wage theft. In fact, Shah notes in the report that nine out of ten people working in fast food have experienced wage theft.

The report is a compilation of the cases in which companies were taken to court to be penalized—where records were made public. Most of the cases hail from California, which is attributable to the state’s relatively strong labor code that gives working people greater access to the courts. In most states, wage theft cases proceed through private arbitration, a process usually controlled by the employer that is often lengthy, expensive and time-consuming, which many wage theft victims simply don’t have the means to pursue, according to Shah’s policy analysis of the report. Due to the fact that the data from private litigation practices are not made public, the results of the report are minimized, cementing the fact that the American workplace is even more rife with wage theft than the report illuminates.

Fighting wage theft just became even more difficult thanks to the U.S. Supreme Court’s recent ruling, Epic Systems v. Lewis, that allows corporations to force employees to sign away their rights to engage in collective action. Shah argues in the report that other states should follow California in implementing anti-wage theft laws to combat the austerity of the Supreme Court’s decision.

Another strategy to combat wage theft is for workers to unionize. Mattera tells In These Times that only a few of the wage theft cases found involved unionized workplaces, emphasizing that “the presence of unions seems to keep labor standards abuses in check.”

“Working people who are victims of wage theft must alert government agencies to the theft, but they must also realize that government is never permanently on their side,” Shah tells In These Times. “The best way to ensure justice in the workplace is to organize and assert their own power.”