This is what a pre-moon Speedmaster watch is worth 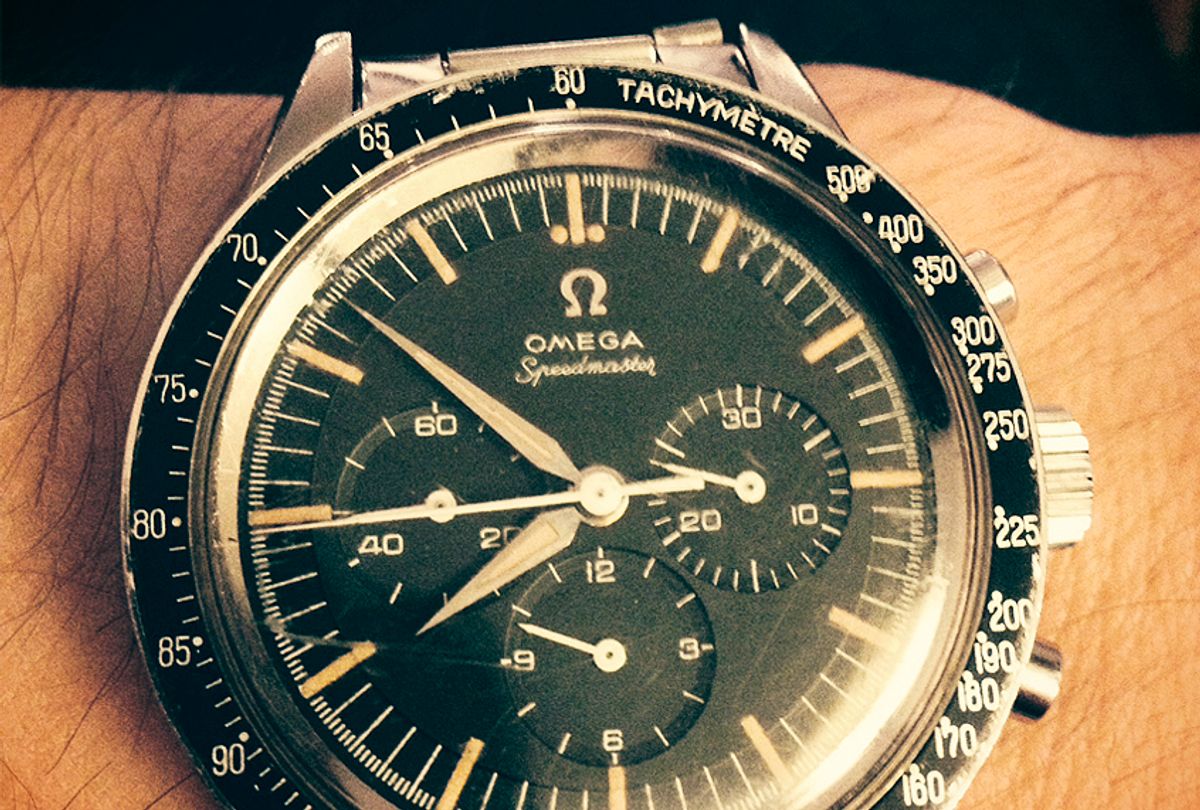 He gave me a long, honest smile. Twelve-hundred dollars was a lot of money. I was a newly minted doctor of philosophy, so it was basically a fortune. We were in the process of moving and a thousand bucks would cover expenses.

I took it off and turned it over in my hands. It really was a beautiful little thing. My grandfather hadn’t worn it more than a couple of times since Hazel, my grandmother, had purchased it for him in the early '60s. Usually, it just stayed in the box, in his bedside table, in his little house in central Pennsylvania. After he died, my mother asked my brother and me if we wanted anything from the estate. Just the box and its contents, I told her.

My grandfather was a strange man when it came to money. He didn’t like to spend it. He was unbearably tight for long periods of time. His wife was expected to mend un-mendable trousers, reupholster their dilapidated sofa, and can countless vegetables.   But then something would happen — like a dam that suddenly breaks — and there would be a trip to Bermuda, or a new Mercedes in the driveway, or the purchase of a sparkling Beachcraft Bonanza airplane. As a child, I’d watched this cycle of austerity and spending from afar. My single mother wouldn’t take money from him, and he rarely offered, save for the times when he wanted his children or grandchildren to act a certain way or do something that they didn’t care to do.

Pop would buy things for himself, but he never really liked presents. Gifts violated some deep-rooted sense of self-reliance or self-control that held him together. “I don’t need anything,” he would say.

Pop didn’t appreciate gifts, but this watch had been a notable exception. It had some sort of absolute, intrinsic value — a power that I’d long regarded as a type of magic. At one point, when I was young, he opened the box and handed it to me with pride: “This is a real pilot’s watch.” He even let me wear it — for a minute — then it went back in the box. When Pop was out of the house, I’d sometimes sneak up to his bedroom to try the thing on. I really enjoyed wearing it -- all the time, now. The band was stainless steel, a type of linked chain that actually expanded a little bit under pressure. It wasn’t flashy, and I wore it everywhere: to the gym, to the office, to the grocery store. I hadn’t thought twice about it until an elderly man at Trader Joe’s asked where I had gotten the watch. I explained and he explained that I should not be wearing it to Trader Joe’s, leaving me with the cryptic admonishment that I “should have a little respect for something that had gone to the moon.” Whatever the hell that meant. I just thought it wasn’t any of his business.

But the watch was in remarkably good shape. Maybe I should try to keep it that way. I looked for the box when I got home, but it had disappeared in a house that had been taken over with baby clutter. The face was about the size of a silver dollar, unscratched, gleaming. Actually there wasn’t a single blemish on the back either — save one. I’d tried to open the back of the watch with a set of pliers. That was, in hindsight, a stupid thing to do. I wanted to see how it worked, but, again, that was a stupid thing to want. The pliers slipped and marred the steel next to the centered emblem of a sea monster.

“You see that scratch on the back? If you sell it, I’m going to have to buff that out,” he said, still smiling.

I made for the door. It was locked. This was one of those high-end stores where you had to be buzzed in and buzzed out. He wasn’t ready to buzz me out yet. Instead he called me back to take another look. Maybe he’d missed something important. He took off the back of the case and read off the numbers: 2998-4.

He was probably right. That would cover expenses and buy a crib and car seat. We needed a crib and car seat. After another three minutes, I convinced the man to reassemble the case and buzz me out. He wasn’t smiling anymore. I would wear it to the grocery store a few more weeks and think it over.

As a rule, philosophers aren’t supposed to wear $2,000 watches. Beat-up blazers, unfashionable sneakers, horn-rimmed glasses, but not $2,000 watches. We are, at least in theory, supposed to eschew the throbbing appetites of the material world, to make like the ancient Cynic Diogenes, who made his home in an empty barrel, to live out our lives on the brink of poverty. Every semester I teach Peter Singer’s article “Famine, Affluence, and Morality,” which argues that people in the first world have a moral obligation to give up their luxuries and donate money to the poorest of the poor. My grandfather’s watch would make teaching Singer significantly more difficult. Maybe impossible.

There was also the more pressing issue: $2,000 can buy a lot of things — baby food, diapers, clothes — things that somehow seemed more important than wearing “a real pilot’s watch.” I wasn’t even a real pilot. But on the other hand, it was my grandfather’s watch.

When I got home that night, my partner, Carol, and I sat at the kitchen table and tried to take account of the situation. We now owned what watch aficionados call “a Speedy” — a vintage Omega Speedmaster. On July 21, 1969, when Buzz Aldrin stepped foot on the moon, he was wearing a Speedy. To the untrained eye, ours was the classic “moon watch.” But we quickly learned that the details are important: ours was actually “pre-moon,” a mint 2998-4, sold in 1960, with the original 7077 bracelet. That night, we decided to sell the watch, but we would not go quietly into the dark night of luxury watch dealing. My afternoon in the shop with the smiling man had been instructive. The watch wasn’t magic. Objects do not have intrinsic value. Their monetary worth depends exclusively on finding a buyer who is willing to pay. That is what we would look for.

Rare objects are notoriously hard to appraise. The rarer the object, the more money, conceivably, it should garner. But it doesn’t always work this way. To appraise an object — an antique, a rare book, a Speedy — you have to find comparable sales. Speedys sell all the time. A robust community of wealthy, but not obscenely wealthy, men has sprung up that drives the market. Most of these men either are, or really want to be, “real pilots.” If you want, you can spend countless hours talking about bezels, tachometers, straight lugging and serial numbers. This was going to be easy.

Or not. Most of these “real pilots” couldn’t believe that the watch wasn’t a knock-off. The pictures I posted on the online Omega Forum looked “too good.” They were right; most watches for sale were newer and rather beat-up — dials scratched and dull, enamel chipped and worn, parts swapped out or missing entirely. I explained that my grandfather hadn’t worn it much, that he’d been interested in keeping safe in his bedside table. Most of them didn’t believe me. One man from Saudi Arabia, however, offered us what seemed like an astronomical sum — $40,000 — but he wanted me to ship the Speedy to him first “for inspection purposes.” Another gentleman from Singapore offered more, but asked if he could pay it over a number of years; if I sent the watch to him now, he promised to “pay the money in full at my earliest convenience.” Obvious scams. I didn’t send the watch. Internet communication seemed so ephemeral and unreliable. I was prepared to sell the watch, but unprepared to watch it vaporize in a transcontinental exchange.

Maybe the man with the honest smile was still interested. His buzzer-protected shop was located in the heart of Boston. But I wasn’t going back there until I was ready. I’d go to New York first. On my next visit I packed my best (read “only”) suit, combed my usually disheveled hair, and buzzed myself into a boutique store on Fifth Avenue. The salesmen — that is what they are, really — were unspeakably polite, smiled appropriately, and made a generous offer. I have learned it is gauche to say exactly how much. I should’ve taken it. I will say this: It was more than I made in a semester of teaching at a community college. There was, however, one more store I had to revisit. On my way out, a well-suited man behind the display case asked where I was from and I told him in passing. I made my way back to Boston and tried not to scuff our Speedy on the train ride home. Tomorrow I would go see the man with the honest smile.

Before I pushed the doorbell buzzer, I took a last look at my grandfather’s watch, and I took a picture. In fact, I had scuffed it up a little in the course of a year. I was sorry about that. But not that sorry. Then I pushed the buzzer.

“Welcome back,” he said, gleaming brightly. “I hear you’ve been to New York.”

I stepped down into the showroom and shook his hand. “I think this might be worth more than $2,000, don’t you?” I said, slowly, deliberately. So that we could savor that moment together.  I could not have put a monetary value on that question.

“Yeah,” he sighed, “perhaps you’re right. Lemme have another look.”

I handed him the Speedmaster. He made an offer. It was less than what I would have gotten in New York, but I was certain that if I went back to Fifth Avenue, the Speedy would have mysteriously depreciated in the interim. So I accepted his offer. But I wanted something else.

“Could you throw in a watch?” I asked. “Something inexpensive, of course.”

He blinked very slowly, thought about it for a moment, laughed, and nodded. He would have to look around for one, though. It would take a couple of days.

A couple of days passed. I returned to pick up the check and the Air King. He hadn’t been able to find the watch, so he handed me a 1981 Rolex Datejust instead. It was considerably cheaper than the Air King. It is unassuming and midsize — something between a man’s and woman’s watch. A Datejust goes for a little more than $1,200. I wasn’t going to quibble. I’d put it on a cheap band and wear it every day. What Carol and I really cared about was the check, which we deposited and promptly spent as the down payment on a small apartment.

Don’t feel bad for my friend, the salesman. He did just fine. Last year, he sold the watch for four times what he offered me. And don’t feel bad for me either. Being swindled is not an objective state of affairs. It all depends on what you are willing to pay.

The rarest objects are the ones with provenance, the ones that have deep and intricate stories behind their existence. I really love the Datejust. I don’t keep it in my bedside table. My 2-year-old daughter used to gum on it. Now that she’s 5, she likes to wind it up and wear it around the house. I, for one, would like to keep it running until I give it to her for good. I hope she wears it everywhere. I’ve already had to fix it twice. I still take it to the man who sold it to me. And he fixes it for free.