Exclusive: Republicans, NRA secretly pressure Citigroup to back off restrictions on gun sellers 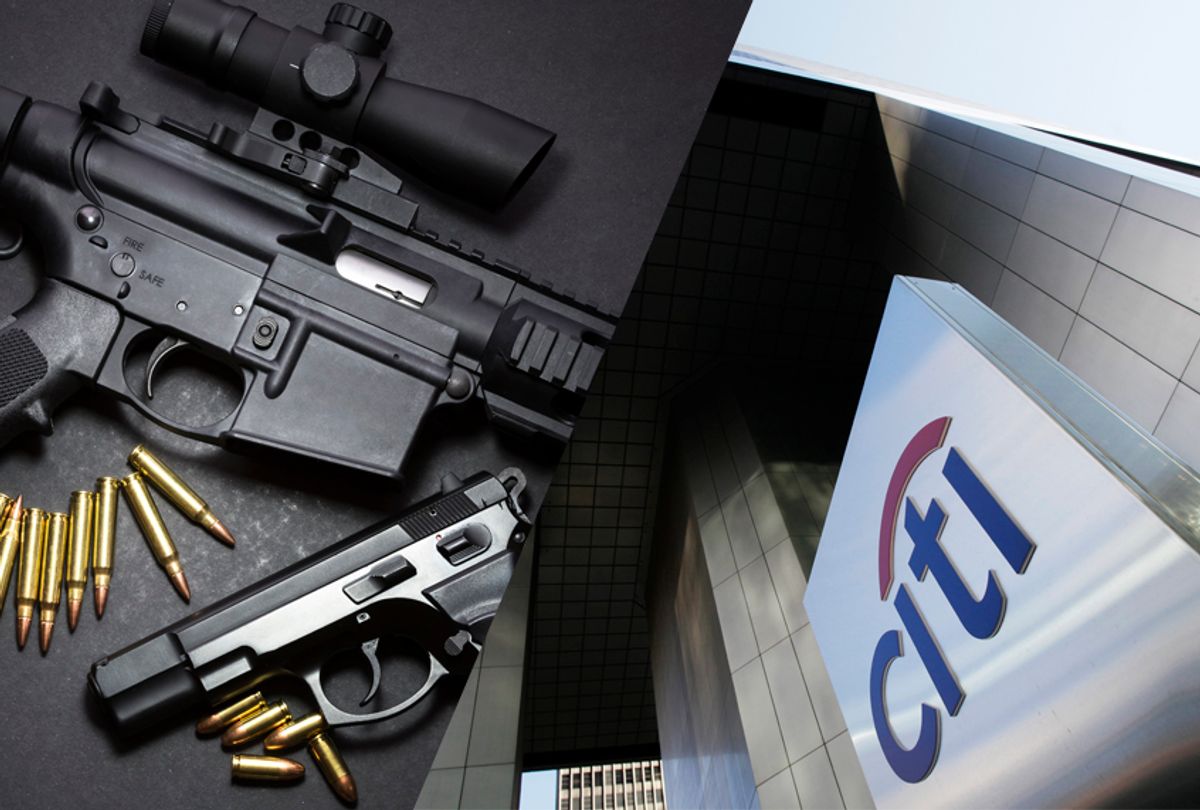 After the February school shooting in Parkland, Florida, that ended the lives of 17 people, a number of corporations took high-profile measures to reduce their own participation in the underregulated gun market. Dick's Sporting Goods stopped selling assault weapons. Both MetLife and Delta Air Lines ended discount programs for NRA members. Citigroup announced new restrictions on its business banking customers in March. For clients who sell guns, Citigroup requires background checks on all sales, a ban on bump stocks and high-capacity magazines and a ban on sales to those under 21.

There's nothing unusual about a bank placing these kinds of restrictions on clients, but it now appears Citigroup has been subject to retaliation from Republicans and pro-gun activists. Gun safety advocates are trying to find out exactly how much pressure the National Rifle Association has exerted on Republicans to bully Citigroup out of sticking by its new gun-sale policies.

In early May, Robert Schmidt of Bloomberg Businessweek reported claims that a Republican member of the Securities and Exchange Commission, Michael Piwowar, had attempted to intimidate Citigroup officials over their gun control policies during an April meeting about derivatives regulation.

Schmidt describes Piwowar as "glowering and speaking emphatically" and reports that people who attended the meeting heard Piwowar say that "he knew Citigroup wanted the SEC to ease regulations on derivatives and proprietary trading, and suggested they might have trouble finding the votes on the Republican-led commission," which "some of the executives took as a thinly veiled threat."

As Salon exclusively learned, Everytown for Gun Safety plans to file a Freedom of Information Act on Monday to determine whether the NRA influenced Piwowar's behavior towards Citigroup. Everytown's FOIA request asks for any communications between members of the SEC and the NRA, the NRA's lobbying arm or the National Shooting Sports Foundation.

“Citigroup took measures to protect the public from gun violence," Nick Suplina, the managing director of law and policy at Everytown, said in an email. "Americans deserve to know whether the NRA pushed Piwowar to abuse his power and retaliate against Citigroup for supporting sensible gun policy."

Senate Democrats have also gotten involved. During a June 5 hearing of the Subcommittee on Financial Services and General Government that was focused on SEC funding, Sen. Chris Van Hollen, D-Md., confronted SEC chairman Jay Clayton, a Donald Trump appointee, about Piwowar's alleged intimidation of Citigroup executives. Clayton, while admitting he was "aware of those reports," said he didn't think a Senate hearing "would be the appropriate forum to get into that." Van Hollen assured him that the issue wasn't going away and that Democrats intended to pursue the matter.

On June 13, Van Hollen did just that, sending a letter signed by five other Senate Democrats to SEC Inspector General Carl Hoecker, asking his office to open an investigation into these accusations against Piwowar. Van Hollen's letter noted that official ethics guidelines prohibit "federal employees from using their public office in a manner that is intended 'to coerce or induce' another person to provide a benefit of any kind to himself or groups with whom he chooses to affiliate."

“If the reports of the meeting are true, it’s very clear there’s an abuse of power," Van Hollen told Salon.

He added that Citigroup "took decisions that they thought were in the best interests of their customers" and that it's "certainly not appropriate for an SEC commissioner to intervene in those business decisions by threatening to withhold or confer support on a regulatory matter.”

One thing is certain: The NRA has taken an aggressive public stance toward Citigroup's business decision to impose these restrictions on its banking clients.

"There is growing evidence that some of America’s financial elite want to create a world in which America’s public policy decisions emanate from corporate boardrooms in Manhattan rather than from citizens and their elected officials," the article ominously warns, while also praising Republican politicians who invoked bailout funds in their condemnation of Citigroup's gun policy.

Later that month, the group put out an action alert, calling on members to complain about the action to the Consumer Financial Protection Bureau, saying the actions were "particularly galling to gun-owning Americans whose billions of tax dollars helped bail out these financial behemoths."

The group fails to note that gun control supporters, as well as the thousands of families who lose loved ones to gun violence every year, also pay taxes.

The action alert decries Citigroup's choice "as political statements and social engineering, not as business decisions based on any alleged financial unsoundness or criminal activity of the affected customers."

Whether one agrees with this choice to discriminate against legal sex-oriented businesses or not, banks clearly have the freedom to do this. In fact, Citigroup's gun policies are far more lenient that the typical banking restrictions on adult businesses, as Citigroup still allows its clients to sell guns and doesn't really restrict the kinds of guns they sell.

This story is still unfolding, but it serves as a reminder of the NRA's continued power and influence within the Republican Party. Republicans like to portray themselves as advocates of "freedom" and enemies of regulation, who oppose the use of federal power to determine how a company chooses to run its business or whom it's willing to serve. But these "small government" principles go out the window when it seems that allowing Citigroup to dictate the terms of its own business contracts might reduce profits, however infinitesimally, for the NRA's benefactors in the gun industry.

Former Rep. Steve Israel on the frustration that led him from serving in Congress to writing satirical fiction.