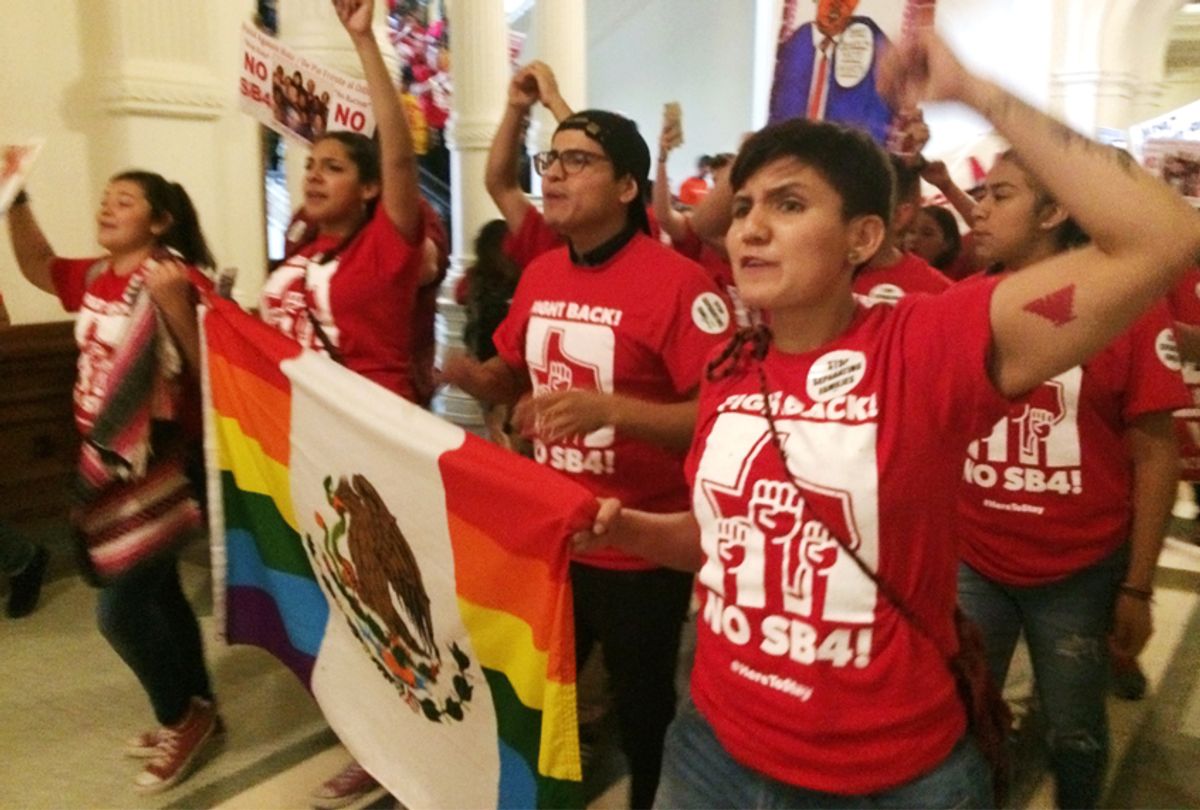 Thanks to Donald Trump's just-abandoned policy of tearing apart refugee families at the Mexican border, Texas is in political crisis. Media has swarmed into the border region, and Democratic senatorial candidate Beto O'Rourke led a protest march to a child detention center outside El Paso. Progressives who live hundreds of miles away in the state's larger cities, meanwhile, are making moves of their own to make their communities safer for immigrants and other vulnerable people who may be subject to deportation and criminal injustice. In doing so, they are standing up to a state government that is strongly aligned with Trump's authoritarian impulses.

Last week, the Austin City Council passed two resolutions, packaged as a "Freedom City" initiative intended to tie the concerns of two movements — Black Lives Matter and the immigrant rights movement — together as one. The overall goal is to limit the invasive power of law enforcement over the lives of Austin city residents.

"Freedom City policies are a sort of expansion of the sanctuary city concept," city councilman Gregorio Casar told Salon. "Policies that recognize that poor people and people of color in all our cities are over-punished, over-incarcerated and over-policed, and that our cities can do something about that by passing policies that value the freedom of every person."

These resolutions, passed unanimously after hours of testimony last Thursday, do two major things. One calls on Austin's mayor to work with police to end what are called "discretionary" arrests, when an officer chooses to arrest someone who could otherwise be let off with a ticket. These kinds of arrests, Casar argued, are part of the reason black Austin residents are seven times as likely to be arrested for low-level marijuana possession as white residents, for instance. (Similar patterns can be observed in most large cities.)

The second resolution of the initiative takes direct aim at SB4, the state's "show me your papers" law, which empowers police officers to ask for proof of immigration status from anyone they stop. It would also require local law enforcement to follow detainer requests by holding people whom Immigration and Customs Enforcement (ICE) wishes to deport, with criminal penalties possible for those who refuse.

The Freedom City resolution undermines this law in two ways. First, it requires any officer who asks for someone's papers to follow it up by explaining that the person is not legally required to comply and cannot face retaliation or arrest for not doing so. Second, it requires that any police officer who is asked to work with ICE can only do so if he has undergone relevant training and has analyzed the request to make sure that it complies with the city's crime-fighting priorities.

“Even though we characterize ourselves as a progressive city, there are a lot of communities of color that don’t feel they have as much of a say in our city as they should," Casar said, noting that he hopes the council has "put together a significant enough package of racial justice items" that can unite different movements in the city under one banner.

Sarah Johnson, the executive director of Local Progress, a group that works with Casar and other local politicians on passing progressive legislation, told Salon that the initiative "brings together the way that policing impacts both immigrant communities and more broadly communities of color that are overcriminalized."

Many cities in Texas have found themselves locked in a battle with the Republican-controlled state government over their right to pass progressive legislation. SB4 was passed in part to punish cities for setting their own policies regarding law enforcement cooperation with ICE. The state has also stopped cities from regulating urban drilling or ride-sharing companies and has sued to block Austin from mandating that employers offer sick leave. Republican Gov. Greg Abbott has publicly called for a statewide law barring cities from passing their own regulations.

When asked whether he's worried that the state will also seek to overrule the Freedom City initiative, Casar said he wasn't: "That would require the governor to sign something into law that says Texas cities cannot have their police officers explain people’s rights to them."

So far, the Freedom City initiative appears to be popular in Austin, and city council members in other Texas cities are taking notice.

"Greg’s my friend, but I’m horribly competitive," Philip Kingston, a council member in Dallas, joked on the phone. Dallas recently passed a law reining in the police from arresting people for possessing small amounts of marijuana, he said, but Casar "took some of that language and added it to Freedom City and outdid us, so I’m jealous."

Kingston affirmed that he is starting work on a Freedom City-style regulatory package in Dallas, though he emphasized that the city has already taken steps to embrace "a strong policy of welcoming immigrants." Still, he cautioned, the environment caused by Trump and laws like SB4 has created problems for his city, and more needs to be done.

“We see that our immigrant communities are basically terrified these days," he said, adding that, like most cities, Dallas has serious racial disparities in policing and he would like to pass legislation to address that issue.

When asked if he was worried that the state would retaliate against Dallas, Kingston said, "In some ways, I almost want to pass as many things as possible that the state legislature doesn’t like."

He pointed to the fact that Dallas has its own movement for a sick-leave regulation, and voters will likely get a chance to pass such a bill by ballot resolution in November. That's going on while the state is fighting a similar law in Austin.

Passing all these popular progressive initiatives will "give the legislature so many targets that it can’t hit them all," Kingston said. "If the legislature continues to publicly flout the will of the people of Texas, I believe that no matter how broken our democracy is, no matter how gerrymandered those districts are, we will eventually kick those bastards out."

The Freedom City resolutions haven't gotten much press attention outside of Texas, but on Wednesday, right-wing media sources picked up the story, using it as propaganda to demonize urban-dwelling progressives in Texas.

"Austin, Texas Takes ‘SANCTUARY STATUS’ to the NEXT LEVEL," blared a headline at Sean Hannity's website, above an article describing Austin as a "left-wing enclave."

Jazz Shaw at Hot Air complained that "simply being a sanctuary city wasn’t good enough for them" and declaring that in Austin, "you will now be free to break the law if you wish and the police won’t be able to arrest you." This is, of course, an entirely false claim. In reality, Austin residents will still face consequences for breaking the law. What will change is that white people and people of color will face the same consequences for most nonviolent misdemeanors, meaning tickets and fines, rather than arrest and possible jail time.

This reaction among right wing culture warriors isn't surprising. Texas's reputation as a red state depends highly on the public ignoring that the larger cities in the state tend to lean left. In recent years, there's been something of a social movement to treat urban Texans as if they aren't "real" Texans, with Abbott accusing city residents of trying to turn the state into California.

Just this week, reports came out about a billboard outside Amarillo that reads, "Liberals, please continue on I-40 until you have left our GREAT STATE OF TEXAS."

It's worth noting that while Trump defeated Hillary Clinton in 227 of the 254 Texas counties in the 2016 election, he only got about 800,000 more votes statewide — not all that much in a state where nearly 9 million people voted. The 27 counties Clinton won are among the most densely populated in the state, and the Texas cities people are most likely to know — Dallas, San Antonio, Houston and Austin — are now all reliably blue areas.

This battle over regulations on everything from oil drilling to law enforcement is about much more than just the laws and regulations themselves, or even the people they directly affect. Texas is in a fight over whether or not right-wingers have sole claim to the identity of "Texan." No matter how many bad jokes or billboards Republicans throw up, progressive Texans are refusing to back down, standing firm in the belief that their state is changing and its future will look very different.