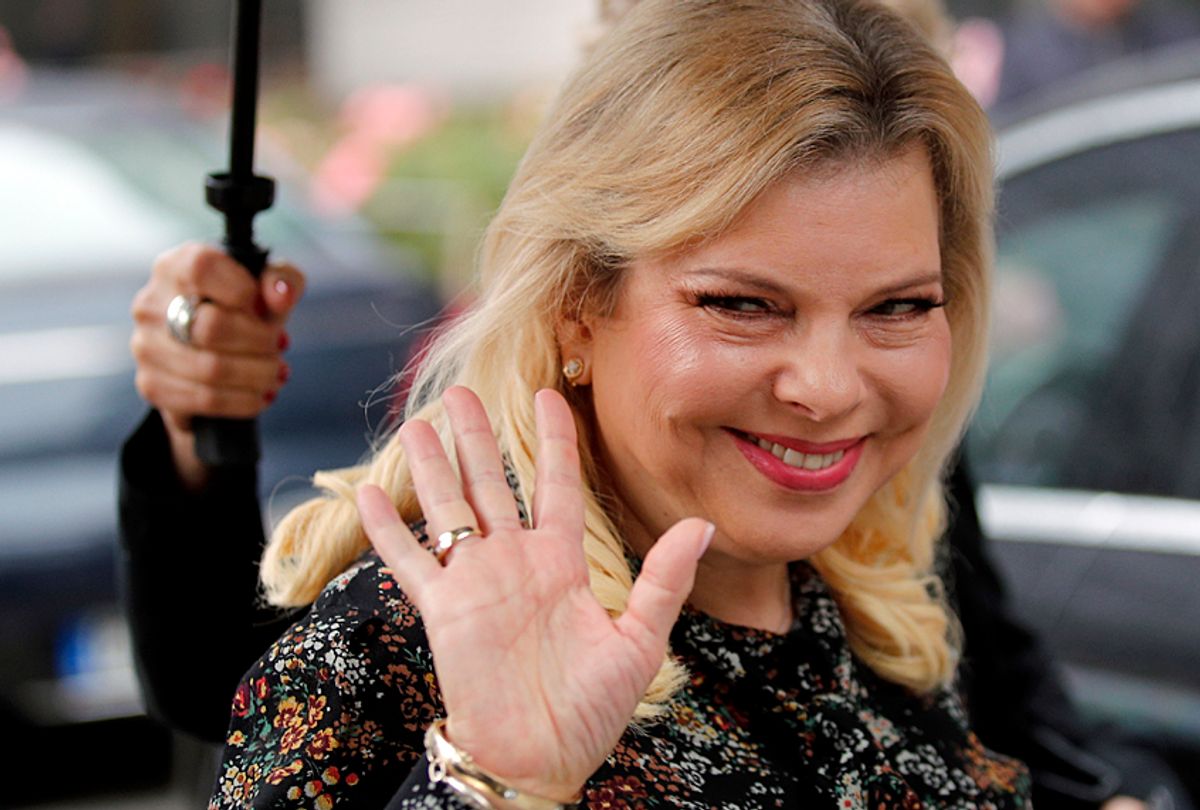 Israeli prosecutors filed charges of aggravated fraud and breach of trust Thursday against the wife of Prime Minister Benjamin Netanyahu, who stands accused of misspending more than $100,000 worth of taxpayer funds on opulent meals catered to the pair's official residence.

Sara Netanyahu has been formally charged with defrauding the state of Israel in a case called the “Meals Ordering Affair,” which also alleges that the prime minister's wife illegally paid private cooks a sum of $10,000.

The charges, which according to CNN could land the prime minister's wife in prison for as much as eight years, marks the latest in a slew of controversies surrounding Israel's most powerful couple, including a possible indictment for bribery charges against Benjamin Netanyahu himself.

The prime minister's wife has also previously been accused of mistreating her domestic employees. One former employee claims she feared for her safety in the Netanyahu residence after the prime minister's wife allegedly screamed at her, “You’re a lump of nothing!” Meni Naftali, Sara Netanyahu's former chief caretaker, also won a wrongful termination lawsuit involving allegations of abusive and erratic behavior.

In September 2017, Israel’s attorney general first went public with his intention to charge Sara Netanyahu. The prime minister's wife, who has been repeatedly accused of indulging in a lavish lifestyle, was once dubbed "Israel's Marie Antoinette."

"Particularly damaging was Naftali’s allegation to an employment court that Sara Netanyahu was often drunk, consuming up to three bottles of champagne a day, a claim denied by the Netanyahus," the Guardian reported.

In the new indictment filed Thursday, prosecutors allege that Sara Netanyahu stuck taxpayers with her bills from the priciest eateries in the city of Jerusalem from 2009 to 2013. CNN further reports:

Sara Netanyahu also used state funds to pay waiters to serve the meals on weekends and during private events, according to prosecutors, who said the hand-picked waiters were registered as "extra manpower" or "cleaners" to hide the fact that they were being illegally employed.

Prosecutors allege that Sara Netanyahu submitted claims "knowing that the claims were not true, believing they were not true, and through these claims, they have received goods by fraud." Prosecutors pointed to the "severity of the circumstances," citing the "sum of money, the planned, continuous, and systemic action, the character of the false presentations, and the carrying out of those deeds in the official residence of the Prime Minister."

Ezra Saidoff, the former deputy director-general of the prime minister’s office, is also facing related charges of breach of trust, forgery and fraud, according to CNN. Prosecutors allege that Saidoff colluded with Sara Netanyahu to keep the illegal meal payments and invoices under wraps.

The hiring of outside catering is not illegal in the eyes of Israeli law – nor is using state funds to pay waiters or food-staff – when there is not a chef assigned to the Prime Minister’s residence. However, the Netanyahu household was equipped with a cook, which meant Israeli taxpayers were allegedly on the hook for the tab.

Sara Netanyahu’s legal team claims the allegations brought forth against the prime minister's wife are both “false and hallucinatory.”

“It's the first time in Israel and in the world that the wife of a leader is put on trial for food entrees," Sara Netanyahu’s lawyers said in a statement to CNN. "There was no fraud, no breach of trust or any other felony. The food was not for the Netnayahu family, but for other people, including workers in the residence. We're certain in the end that justice will speak. Truth and logic will prevail."