Don't worry, be cynical: Why the fear of a nation of critical skeptics is overblown

Yes, Trump is making us all cynical. But that's not likely to destroy our social fabric or political engagement 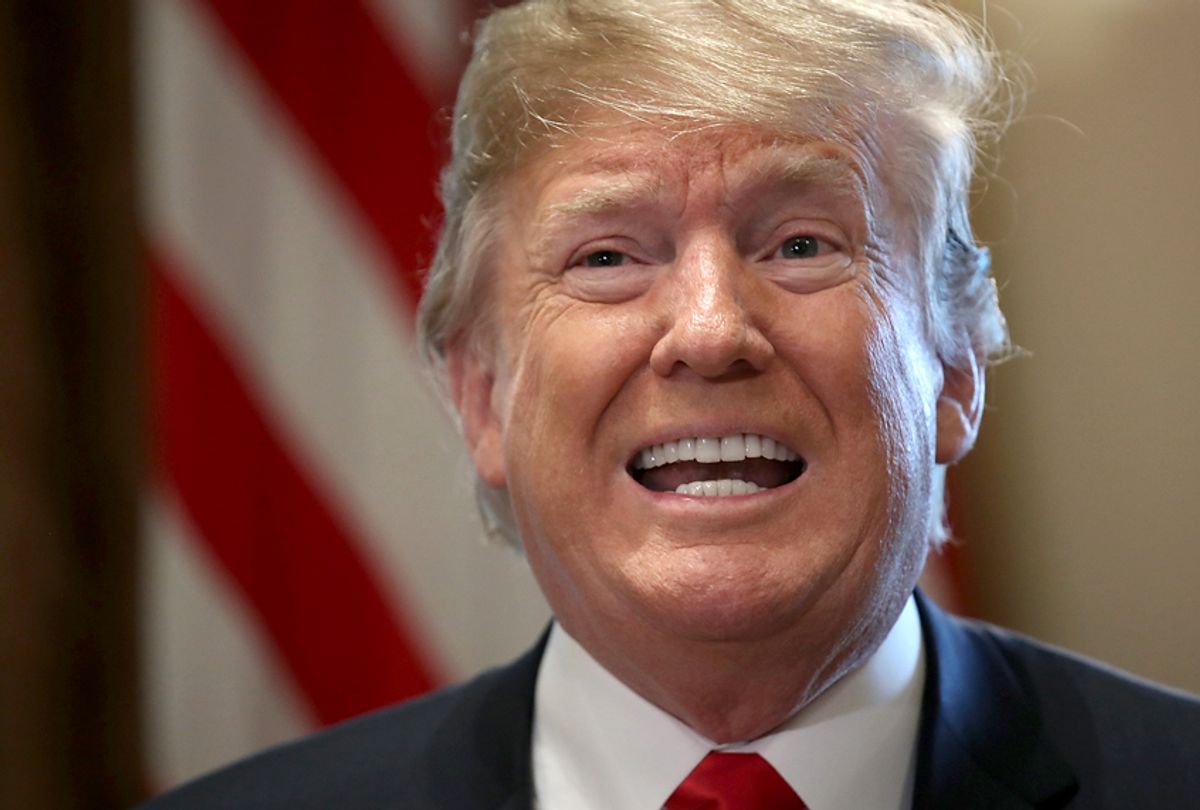 Since the election of Donald Trump public trust has waned across a range of institutions — especially government and the press. According to the Edelman Trust Barometer, from 2017-18 the United States witnessed the steepest decline in public trust of institutions ever measured. Trust dropped 9 points among the general population and a whopping 23 points with the informed public, placing the United States last in a ranking of 28 countries.

When we look across party lines, the decline in trust is even more noteworthy. The Pew Research Center reports that the “share of Democrats expressing trust in government is among the lowest levels for members of the party dating back nearly six decades.” As of May 2017, only 16 percent of Democrats and Democratic-leaners said they are satisfied with the way things are going today, down from 52 percent in October 2016.

The reason why we have so many measures of public trust in institutions is due, at least in part, to the common assumption that a lack of trust is a bad omen for a healthy democracy. A lack of trust, the worry goes, leads to a lack of commitment to institutions. It results in fatalism, nihilism and a general belief that everyone is corrupt, biased, and/or self-serving. A lack of trust makes us cynical and that's generally thought to be a bad outcome.

Those critical of the effects of cynicism on political engagement worry that being negative will adversely affect one’s interest in advocating for political change. As Julian Baggini put it in The Guardian, “the greatest slur against cynicism is that it nurtures a fatalistic pessimism, a belief that nothing can ever be improved.”

And while a lack of trust is also tied to skepticism and pessimism, it is often thought that the cynic is the worst of all — simply too negative and too critical and too distrusting to do anything but sow more distrust and ruin the whole enterprise. A rise in cynicism, then, is often directly tied to concerns that citizens will be too negative to participate in politics. They will give up on fighting for change and focus instead on griping about everything they think is wrong.

From this viewpoint, the election of Donald Trump and the unprecedented rise in voter distrust in politics and the press is a grim development. As US News and World Report put it earlier this year, Trump is turning us into a nation of cynics and “Optimism, that all-American trait, appears to be waning.”

But what if the worries over the rise in cynicism as a negative and paralyzing response to Trump are unfounded? What if it actually turns out that being a cynic is actually a good sign for political engagement? And, what if the longstanding assumption that cynics are just grouchy naysayers is all wrong?

Here are three key things to keep in mind as our nation enters its most cynical phase in recorded history.

1. Cynicism is not the same thing as apathy

Most folks who worry that cynicism will ruin our democracy conflate cynicism with apathy. The common misperception is that the cynic is simply so negative that they give up on advocating for change. This assumption often leads to the idea that, if all we do is consume negative news, we will simply give up on politics altogether. But a 2012 research study on the ties between negative news and political engagement proved that assumption to be false. In fact, the research team was able to prove that there was no link whatsoever between cynicism and apathy.

In another study from a research team based at the University of Connecticut, they were further able to refute the presumed link between cynicism and apathy. Moreover, they found that there is a positive relationship between political cynicism and political participation. They further showed that the cynic’s tendency to think critically is a productive metric for indicating political involvement. That means that the more critical and skeptical the cynic is, the more likely they will be politically active.

J. Gregg Robinson did a research study, published in the academic journal Social Justice, on the rise in cynicism after the foreclosure crisis which led him to further debunk the presumed ties between cynicism and apathy. Robinson’s research makes a valuable link between cynicism and anger, and shows that the cynic’s anger often motivates political action. “Anger at government is unlike indifference to it,” he explains. “An angry person is still engaged with the object of anger. In politics, like love, the worst thing is not anger, but indifference.” His study explains that one of the decisive features of cynicism is anger and anger directly leads to a desire to fight back.

The concern over the rise of the cynic is matched by concern over the power of political satire to create the cynic.  Since 9/11 satire has become more socially significant in this nation, not only as a source of news, but also as a major player in shaping political discourse. Remember that Jon Stewart was often described as the “most trusted man in America” — a sign for many that our nation was heading in the wrong direction and that satire was at least partially to blame.

One of the most common criticisms of political satire is the idea that the audience consumes satirical comedy, has a laugh, and then settles in on their couch in a negative stupor. Malcolm Gladwell accuses satire of functioning like a political analgesic. For him, satirical comedy overshadows meaningful political debate. As one of the guests on his podcast dedicated to the negative effects of satire put it, “perhaps, instead of laughing about them, we should try to do something about them.”

Steve Almond similarly worries about satire’s ability to create an apathetic, unserious cynic in his new book "Bad Stories." “We are learning to see politics and media as a joke,” he writes.

But guess what? These worries are simply not confirmed by research on political satire, cynicism, and political engagement. We do have proof that exposure to satire makes people more cynical and increases negative attitudes towards politics. But, as I’ve argued in my research on satire and politics, satire can’t make an audience cynical about something that doesn’t deserve it.

Another study by Hsuan-Ting Chen, Chen Gan, and Ping Sun showed that the link between cynical anger and political satire was directly tied to citizen engagement. The researchers found that when “people consider an issue personally important and anger serves as a motivating factor, exposure to cross-cutting political satire can transform people into active citizens.”

There’s a catch, though. As Jody Baumgartner has shown, not all political comedy is equally designed to lead the audience to action. There is a marked difference, for example, between most late-night comedy and the specific genre of political satire. Making a mocking joke about Trump’s ridiculous hair or his ill-fitting suits gets a laugh, for example, but doesn’t lead to any productive political outcome.  Baumgartner shows that true political satire like that found on Comedy Central’s “The Daily Show” or John Oliver’s “Last Week Tonight” can, in fact, mobilize viewers to political action.

Evidence also suggests that the angrier the satire, the better.  This means that the edgy, sharp, and pissed-off political satire of Lee Camp on “Redacted Tonight” or Samantha Bee on “Full Frontal” is more likely to lead to politically productive cynicism.

3. Not all cynicism is the same

I’ve mentioned that under Trump cynicism is on the rise, but I haven’t yet covered the fact that Trump isn’t just making his detractors cynical; he is also actively cultivating a cynical base of supporters.  In yet one more example of how the Trump era has made hyperbole the norm, we have a rise in legitimately cynical Trump critics alongside a rise in irrational Trump-loving cynics who trust no one but him.

So just as we have to winnow out the real fake news (i.e. news that is purposefully misleading) from the fake fake news (i.e. news Trump calls fake because he doesn’t like it), we also have to critically evaluate the difference between legitimate cynics and fabricated ones.  Legitimate cynics have a verifiable reason not to trust in something.  Fabricated ones have been hyped up by Trump or some other alt-right news source to freak out over nothing.

Baggini refers to intelligent cynicism. For him, intelligent cynicism derives from a critical disposition to ask questions, reject the status quo, and resist rosy narratives that hide the truth of things.  The catch, though, is that one of the pillars of the Trump agenda is the idea that his supporters can’t trust anyone but him and those who support him. Steve Benen explains that sowing distrust and undermining public confidence in government and the media are a staple of the Trump presidency. Whether casting doubt on folks who assess crowd sizes, federal judges, experts, or climate scientists, Trump has learned to weaponize cynicism to his benefit.

So, for all of the intelligent Trump era cynics out there we have to note that there is an equally expanding group of irrational cynics who are also angry and also interested in advancing their agenda.

But just because Trump is effectively mobilizing a mass of cynics to his side doesn’t mean we should throw the political act of cynicism under the bus. The best response to Trump-loving cynics, I’d argue, is to be even more cynical of them and their leader. The more we think about how effective he has become at producing Trump-loving cynics, the angrier and more engaged we can become to fight back.

This is all to say that thanks to Trump we have a prime opportunity to rethink the role of cynicism in politics in this country. Where once the legitimate cynic was ostracized for being too negative and too critical, we can now see that those habits of mind are essential features of political agency. Just because you have a negative view of politicians and the institutions they work for, doesn’t mean you don’t care, and doesn’t mean you aren’t ready to fight for change.

Turns out that the rise in intelligent cynicism is not just an appropriate response to Trump; it should actually make us optimistic.