Mainstream media's moral cowardice: Time for the Times (and everyone else) to stand against evil

In covering Trump, media too often defaults to lazy what-aboutism. History tells us cowardice will be punished 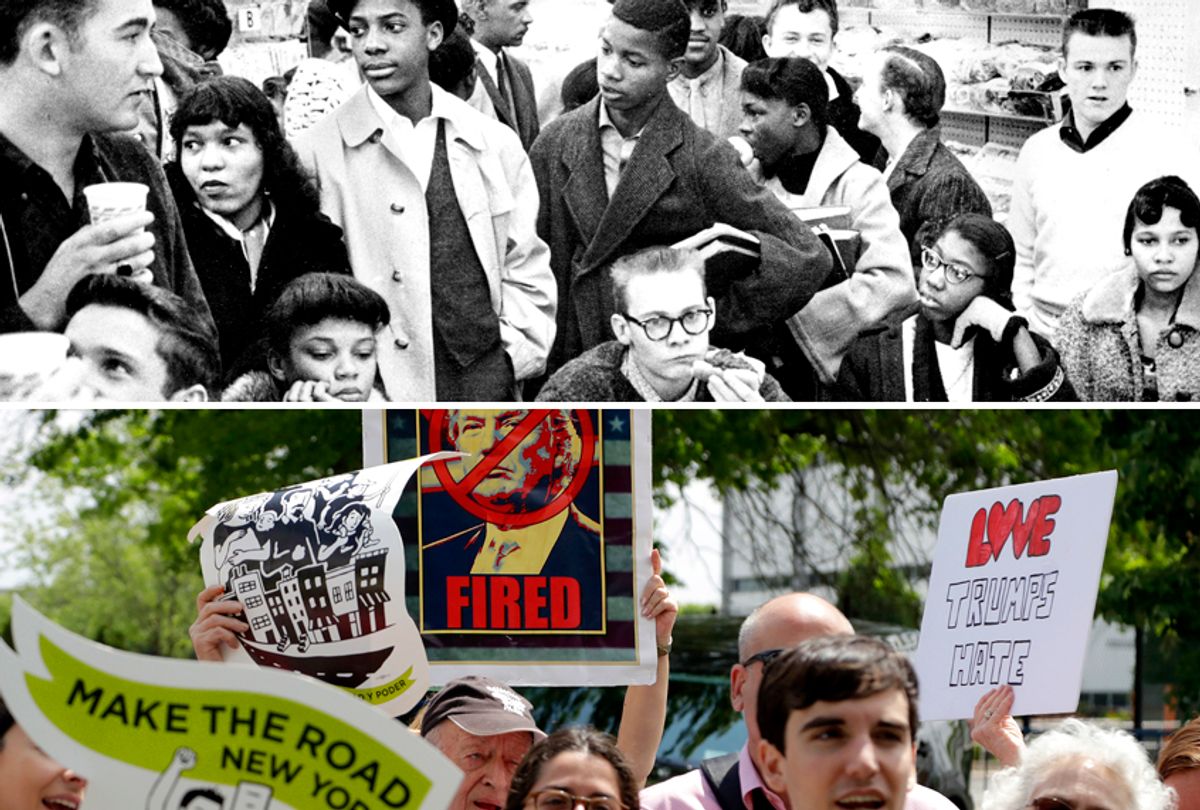 False equivalency is a form of moral cowardice.

On Wednesday, the New York Times featured another story on the political discord and chaos caused by Donald Tump's presidency. The Times' headline read "In Era of Trump, Incivility Spreads in a Divided Nation."

The frame is clear: Those who oppose Trump's authoritarian regime and its cruelty are somehow equally responsible for the "incivility" that Trump and his supporters have created. As Jeet Heer explained at the New Republic, "The Times article rests on a strange conflation of civility (which is about obeying conventional rules of decorum) with morality."

After a public outcry on Twitter and elsewhere -- which perhaps provoked some embarrassment -- editors at the Times then changed the headline: "In Trump’s America, the Conversation Turns Ugly and Angry, Starting at the Top".

This is window dressing. It changes nothing about the content of an article that included deeply problematic moral equivalencies such as this:

President Trump has railed against undocumented immigrants in recent days, branding many of them “murderers and thieves” who want to “infest our country.” Not long ago, he referred to them as “animals,” although he insisted he meant only those who join a violent gang.

The president’s unpresidential language has become the standard for some on his team. This week his former campaign manager, Corey Lewandowski, made a mocking noise, “womp womp,” when a liberal strategist raised the case of a 10-year-old girl with Down syndrome separated from her parents at the border.

Mr. Trump’s coarse discourse increasingly seems to inspire opponents to respond with vituperative words of their own. Whether it be Robert De Niro’s four-letter condemnation at the Tony Awards or a congressional intern who shouted the same word at Mr. Trump when he visited the Capitol this week, the president has generated so much anger among his foes that some are crossing boundaries that he himself shattered long ago.

The politics of rage that animated Mr. Trump’s political rise now dominate the national conversation, as demonstrated repeatedly during the debate over his “zero tolerance” immigration policy that separated children from parents apprehended at the border.

Donald Trump is a would-be authoritarian leader, who with the help of his right-wing allies is assaulting democracy, undermining civil and human rights and wearing down the very rule of law. The United States, and by extension the world is in the midst of a grave political crisis.

The United States is also in the midst of a moral crisis. That tens of millions of white Americans, many of them encouraged by Christian nationalist church leaders, and motivated by racism, bigotry, loneliness and as a desire to hurt people they view as Other, would elect a grossly unqualified and ignorant reality-TV show personality as president of the United States hints at deep moral rot in the country. Put bluntly, America is sick; Trump's political movement is a symptom of profound social pathologies.

In this moment the fourth estate has a special obligation to follow through on its responsibilities of serving as a check on power so that the American people can take the proper actions to end this national nightmare, which has already gone on far too long.

Unfortunately, the New York Times appears unwilling to fully follow through on this obligation. Perhaps a lesson from another challenging moment in American history can help right their moral compass.

Journalists and reporters had a choice to make in response to the civil rights movement's maneuvers to finally bring down Jim Crow during the 1960s. They could tell the fundamental truth about America's homegrown version of apartheid or be "fair" and "balanced," thus legitimizing bigots, white supremacists and racial terrorists who were committed to denying black Americans their full and equal human rights.

Charlotte Grimes continues this in her article "Civil Rights and the Press":

Those two adages capture what may journalists see as the mission of a free press in a democracy. They call on journalists to fulfill their public service mission of watchdog and witness. The courageous coverage of the civil rights movement in the mid-20th-century United States was a classic example of those adages. The words, photos, and videos of the journalists covering the movement helped stir the nation's conscience to confront the racism that deprived African Americans of basic civil rights.

American history teaches other lessons about the responsibility of journalists and reporters to the truth as well. Reflecting on dilemmas of "balance" and "fairness" when faced by the judgment of history, NPR's Alan Greenblatt frames the issue this way:

Supporters of same-sex marriage are convinced their position will eventually look like that of civil rights supporters in the 1960s, something history will judge to have been incontrovertibly right. The San Francisco Chronicle seems to believe that moment has already arrived.

When the Supreme Court issued twin rulings in favor of gay marriage last June, the Chronicle ran a banner headline on its front page trumpeting "Double Victory," kicking off a large package of celebratory coverage.

Remember, one of the court cases threw out a California ban on gay marriage that had been approved by state voters just five years earlier. Nevertheless, Audrey Cooper, the managing editor of the Chronicle, says her paper's coverage was "perfectly appropriate."

She says on some issues, being "right" occasionally means being in the vanguard of change.

Why would the New York Times and other leading news outlets surrender to the false moral equivalency of narratives that "both sides do it," as well as an unwarranted commitment to "fairness" and "balance"?

It's no mystery. This is a direct consequence of conservative success in creating a lie that there is a "liberal news media" that is fundamentally biased against their point of view. So the supposedly liberal media bends over backwards to accommodate the lies and distortions circulated by the American right-wing.

History always contains echoes: the "liberal news media" frame was first used by white conservatives in the 1960s to undermine coverage of the civil rights movement and anti-war protests on college campuses.

Even more important, there is no "liberal media." There is only a corporate news media which plays its role in a larger system of power described by Noam Chomsky in his famous essay, "What Makes Mainstream Media Mainstream":

Okay, you look at the structure of that whole system. What do you expect the news to be like? Well, it’s pretty obvious. Take the New York Times. It’s a corporation and sells a product. The product is audiences. They don’t make money when you buy the newspaper. They are happy to put it on the worldwide web for free. They actually lose money when you buy the newspaper. But the audience is the product. The product is privileged people, just like the people who are writing the newspapers, you know, top-level decision-making people in society. You have to sell a product to a market, and the market is, of course, advertisers (that is, other businesses). Whether it is television or newspapers, or whatever, they are selling audiences. Corporations sell audiences to other corporations. In the case of the elite media, it’s big businesses.

Well, what do you expect to happen? What would you predict about the nature of the media product, given that set of circumstances? What would be the null hypothesis, the kind of conjecture that you’d make assuming nothing further. The obvious assumption is that the product of the media, what appears, what doesn’t appear, the way it is slanted, will reflect the interest of the buyers and sellers, the institutions, and the power systems that are around them. If that wouldn’t happen, it would be kind of a miracle.

As Spalding Gray remarked in his film "Swimming to Cambodia" there is "perhaps an invisible cloud of evil that circles the Earth and lands at random in places like Iran, Beirut, Germany, Cambodia, America." In the age of Trump this evil cloud has most certainly settled over our country.

To dissipate that cloud, restore American democracy and purge the social pathologies that gave rise to Trumpism, the New York Times and other institutions of the press must shoot "bullet[s] of truth into the heart of evil.”

Up to now, too many reporters and journalists have been using soap bubbles.

There is a certain vein of absurdist and dark humor which suggests that if the Nazi Party had emerged in today's 24/7 cable news environment, many networks would have featured back-and-forth discussions between Nazis and their opponents about whether a plan to exterminate the Jewish people was a good or bad idea. All points of view are valid!

The American news media has not sunk anywhere near that level. But the slippery slope that leads to such moral blindness is where we find ourselves now.

Obama adviser: GOP stands for nothing

Dan Pfeiffer joined Salon Talks to discuss how Democrats can best fight back.