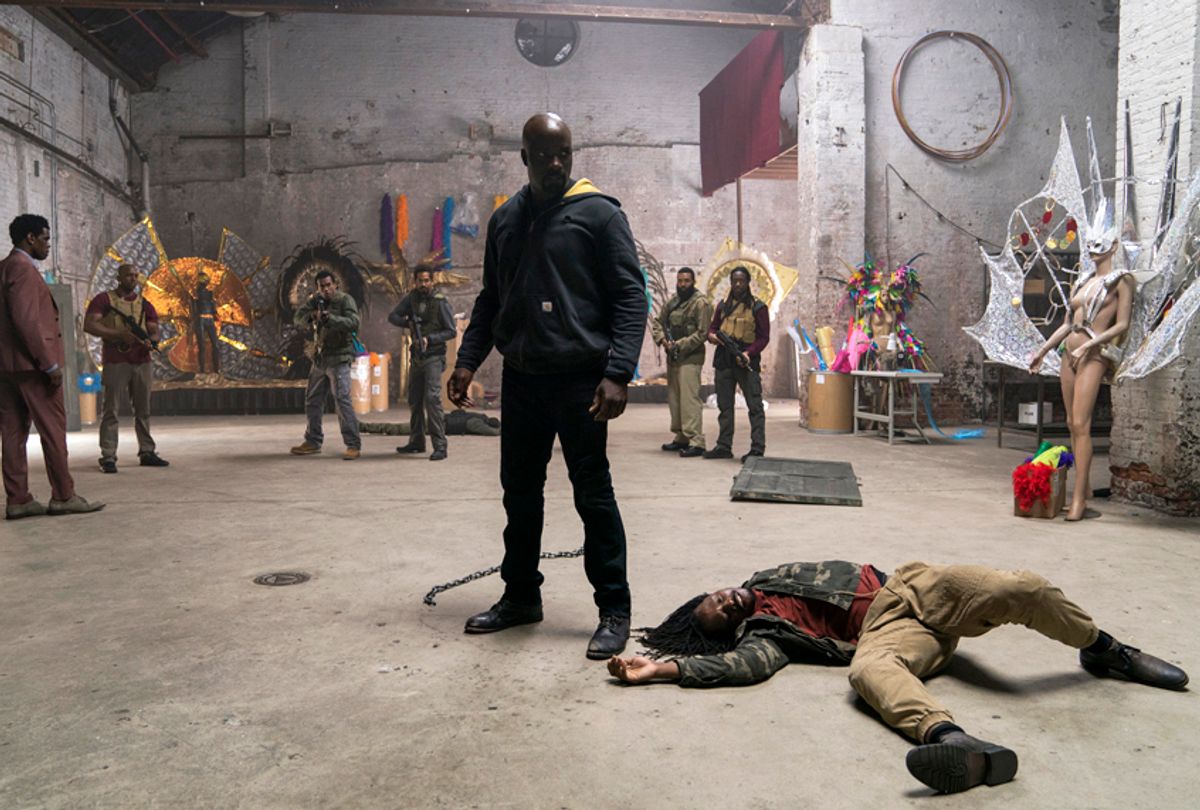 Hip-hop’s influence runs fathoms deep in “Marvel’s Luke Cage.” It’s in the soundtrack, in the way characters carry themselves, in the paintings on the walls. Every episode is an ode to a specific artist’s best track, be it by Gang Starr (whose songs inspired the first season’s installment) or, in this new round, Pete Rock & CL Smooth.

Presumably hip-hop provides a constant bassline in series creator Cheo Hodari Coker’s consciousness, informing where Harlem’s Hero takes his narrative in this new season in ways viewers might not expect or understand. In a not-too-distant past Coker was a renowned music journalist who witnessed the rise of artists and groups now considered to be icons.

When he was asked to spell out the main themes of the second season of “Luke Cage,” which is now streaming on Netflix, understandably Coker called upon  a metaphor understandable to anyone who loves 1990s hip-hop. Speaking on behalf of the show’s writers, he said, “We really wanted to be the second album that made you love a group that you just liked,” he said. “That's what we really wanted to do — we wanted to have a second season that raised the stakes.”

This is telling for anyone who, say, loved the Beastie Boys’ radio-friendly, rock-heavy debut record only to be flummoxed by the funk and jazz flavor of “Paul’s Boutique,” or vibed with the “D.A.I.S.Y.” flavor of De La Soul’s “3 Feet High and Rising” but didn’t quite get “De La Soul Is Dead” — at least not at first. With a little distance, and maturity on the part of their audiences, these recordings are now known as classics. “Paul’s Boutique” was considered to be a commercial failure when it was first released. It’s since gone double platinum.

Second records can be polarizing, in other words. You’re either caught up in the beat or, as Coker jokingly said of one critic’s particularly harsh assessment of the new season, “maybe he just can’t dance.” And that’s fine.

Season 2 of “Luke Cage” probably won’t achieve the legendary status of the musical influences Coker aimed to emulate, but if it’s your thing, it's a good ride. Marvel fans may find it to be a slower burn than they’re accustomed to, one that’s as much concerned about social and political issues impacting Harlem’s Hero, played by Mike Colter, as it is about bringing him into conflict with adversaries.

Coker and the writers demonstrate a close attention to the world around them that plays heavily in this new season. “Like the movie business recently discovered, super puts asses in the seats, but human keeps them there,” Coker said. “So you have to do both. You have to tell a super story that has some fantastical element, but the human element is what's going to keep people watching.”

Some of that shows up as a recognition of the pull held by real-life media figures, including ESPN’s Jemele Hill and  journalism professor and New Yorker staffer Jelani Cobb, as well as Hill’s colleagues Stephen A. Smith and Michael Smith.

Sports fans may recognize those faces and appreciate the implied meaning of their inclusion, particularly that of Cobb and Hill. Other homages are slyer, such as a lighthearted interaction between Claire Temple (Rosario Dawson) and Luke’s father, James (Reg E. Cathey), that exists as a tip of the hat to writer Roxane Gay. These threads have the subtlety of looped samples that you can’t quite place; maybe a person will chase them down or simply allow them to exist in Luke’s world.

Anyway, there’s plenty of familiarity to keep returning viewers anchored in this world, especially fans of Misty Knight (Simone Missick), who receives a larger portion of development in these new episodes, along with a lot more action.

Alfre Woodard’s Mariah Dillard is back with a vengeance, with Theo Rossi’s Shades at her side. Other villains are new and mysterious enough to pose a deadly threat, mainly Bushmaster (Mustafa Shakir), the ruthless leader of a Jamaican gang led by another crime family, the McIvers. Mariah's family, the Stokes, has an ugly history with the McIvers, and while Mariah would rather ignore it, Bushmaster's refusal to let it go threatens to destroy both of them and Harlem itself.

Then there are folks caught in the middle or hovering on the outskirts waiting for everything to fall apart, like Mariah’s daughter Tilda (Gabrielle Dennis) or a new crime boss making herself known to Luke for the first time, Annabella Sciorra’s Rosalie Carbone.

Any hip-hop record worth its salt is a well-balanced mixture of new sounds and old-school samples, and such is the case here. “Our writers room is composed of writer/producers that are geeks of comic books, geeks of music, and geeks of politics,” Coker explains. “So there were many a time when myself, Nicole Mirante-Matthews, Aida Croal — Aida was my No. 2 last season — and Akela Cooper, we would just get into these long discourses about politics, in addition to everything else that's going on.”

This shows up in the second season within a clash of larger family histories, but also in the story’s portrayal of what happens when a political structure, even one based in crime, suddenly disappears. And this leaves “Luke Cage” in an interesting place by the end of the season, with Coker and the writers daring to ask, “If a superhero is a community superhero then is he going to protect his community by controlling everything? If he decides to control crime, does that make him a crime boss? Does that make him a criminal?

“That's really one of the questions that you have to ask, because if you are going to declare war, the easiest way to declare war is to basically take over everything. One way of seeing it is, ‘Oh, you're keeping things safe.’ The other way of looking at it is, ‘Hey, that's martial law.’"

Coker is very careful in speculating about a third season; the second season hasn’t even been available for a full weekend yet. But he also enthusiastically backs the direction he and his team have taken in these new episodes.

And if people really can’t move with it, he understands. “It's the difference between people that like jazz singles, that liked bebop when it was only two minutes and 55 seconds, and the people that like Coltrane and Miles Davis when they did 20-minute songs. It's like, do you really need all this space?

“But that's where the perspective expands,” he continued. “That's where the experience expands. Yes, we play long, because we're really trying to make ‘Bitches Brew.' We're not trying to make a Dean Martin record ... sometimes people won't get it. Sometimes critics who are adored will hate what you do and say you wasted 10 hours of their time. I don't agree, and you know, I'm sorry that [they] can't dance. It is what it is.”