In the backyard of my grandparents' house on the island of Sardinia, there was a fig tree 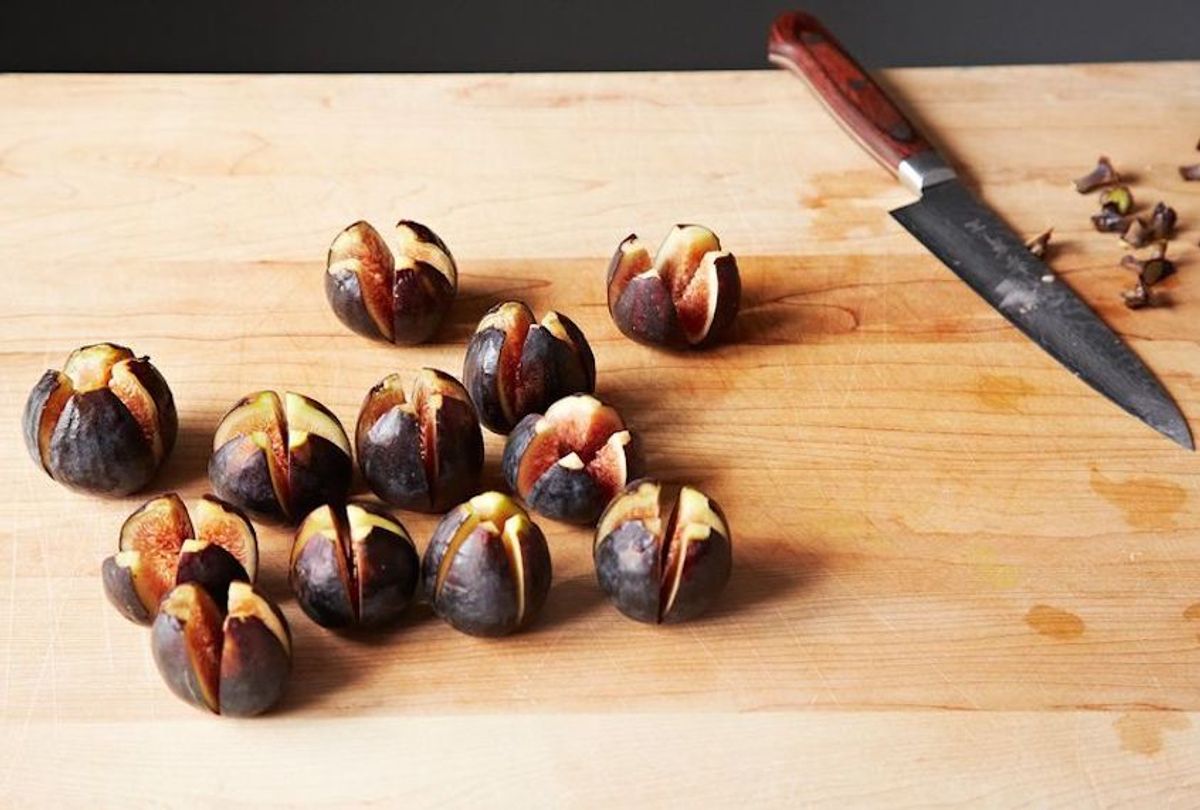 In the backyard of my grandparents' house on the island of Sardinia, off the western coast of Italy, there was a fig tree. There is a fig tree. It’s still there, even if bits of it live miles, oceans, continents away. A gnarled stump twists its way upward and gives way to big, dark green leaves like gecko palms. In unison they form a formidable army, a dense cloud under which hide tender and delicate fruits, summer’s final rain. The figs perch in groups of three or four, swelling at the bottoms, threatening to fissure under the weight of their juice.

Figs don't reveal their beauty to the world. They flower inward instead of outward and the rosy squiggles that populate their centers are but unopened blooms that reach for each other rather than toward you. In that, they're elusive. They don't seek approval. An amber droplet might escape a fig when its sweetness is too much to contain, but otherwise it exists to be discovered. 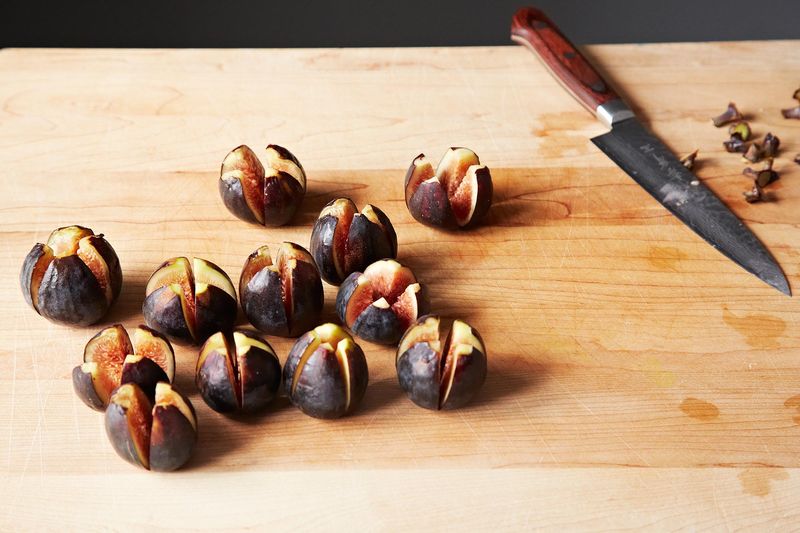 Where my dad grew up in Italy, most things are rugged — the people, the roads, the cheeses — and figs are no exception. Their trees line most roads and drop overripe fruit where they sit on the sidewalk collecting flies and oozing sugar.

Once, on a long walk, my grandfather reached for a branch sagging with figs and twisted off a bulging purple pouch. A small speckle of what looked like milk appeared where the fruit had been separated from the tree. He handed it to me, motioned with two nods. It was larger than my palm. I cupped it and bit into it like an apple. My first fig didn't drip down my forearms like a watermelon or stain my teeth like strawberries. It coated my lips and fingers with a honey-like syrup that lingered hours after Nonno and I had returned from our walk.

Summers in Sardinia were always like this, slow and unintentional, full of small eating breaks.

After walks with Nonno, I'd fall into a hammock, stomach swollen with sweet-bellied figs, the only obvious summer snack in Italy. Dreams don’t come easy in the afternoon, but I’d awake from my shade-bound slumber to the sound of branches snapping, leaves fluttering — and a soft fig hitting me on my chest with a thud (my grandfather having just tossed me the saccharine alarm clock to wake me for a game of cards).

One summer, my mother’s parents, visiting from Dallas, came to stay with us at Nonno and Nonna's. They'd never seen ocean water so crystal clear, or watched herds of sheep bleat from their windows. And they’d never held figs so big you needed two hands to pry them from their branches.

As neither set of grandparents knew a word of the other's language, the four "spoke" instead in hums and gestures. With all that humming and gesturing, it wasn't uncommon for miscommunication to brew. When this happened, we bilingual grandkids would step in to smooth things out.

In the absence of language, food became an easy (and perhaps, the only) option for a back and forth between in-laws who had so much to say to each other, but so few words to say them with. Here, try this was a big one (the double nod): an extra spoonful of yogurt in the morning, a generous grating of pecorino on another's pasta. Where one side offered food, the other responded with halting thumbs up, toothy smiles, approving stomach rubs. Delicious. Eventually I taught my American grandparents to stick their pointer fingers into their cheeks and twist. Means: I like this. They'd twist until small red dots appeared on the sides of their faces.

At the end of the summer, as we packed our suitcases to fly back across the Atlantic, my Nonno shuffled into our room. He handed me something as long and as thin as my forearm, wrapped in a kitchen towel.

"Give this to your grandfather," he told me in Italian. "And make sure he plants it in his backyard as soon as he gets home."

When I turned to my other grandfather to translate, he smiled and said, "I got it."

They both looked at each other, a transcontinental understanding. We watched as my American grandfather carefully nestled the branch between the folds of his clothes. 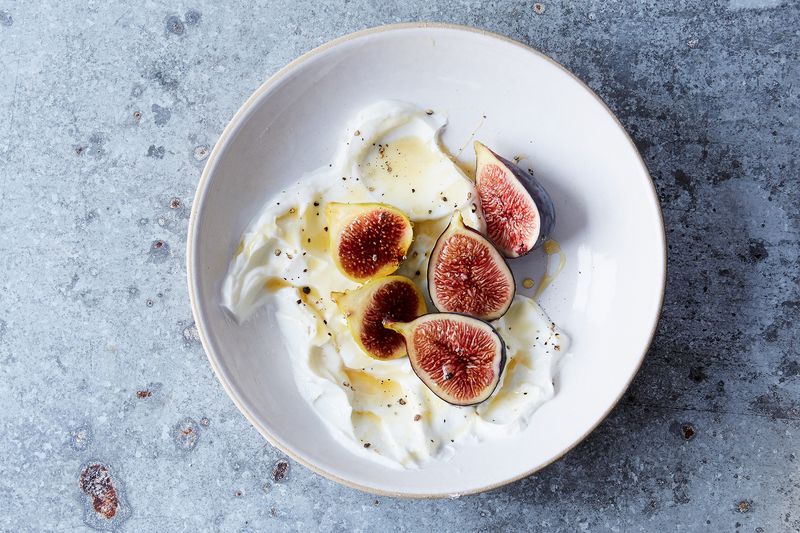 Back home, my grandfather planted the branch in the warm Texas peat behind their house, where it sprouted from the earth like a staff. As our visit to the Mediterranean threatened to fade with time, the transplanted tree began to fruit.

Years later, that fig tree still casts a shadow across my grandparents' backyard. The fruit are not as robust as the ones that dawdle in the Sardinian sun, but they’re sweet and fleshy all the same. We gather under the branches sometimes and shake the figs to the ground, eat them with yogurt and honey drizzled on top. Summers are much longer in Dallas, so figs are a multi-month affair thanks to that tree.

Every summer I can walk into my grandparents' kitchen and know that there's a bowl of fresh figs waiting for me on the counter. I like to sit alone and savor them with nothing more than a cloth napkin laid underneath. Even here in Texas, miles away from Sardinia, they are, for me, the only obvious summer dessert.

And I find it strange that a tree, the same tree, that once held such specific significance for me of one person and of one place — my Nonno and his island in the Mediterranean — has now been bifurcated, cloned. What was the memory of one grandfather is now the symbol of both. Their humors aren’t quite the same, and they speak in sharply different tongues. One drinks espresso, the other drip coffee. One watches football, the other baseball. Yet when I sit down to eat these figs, I know that with each of them, wherever I am, I’m eating from the same exact tree.