"My head would have blown off": Meghan McCain admits to a GOP double-standard on first lady fashion

"I have to take ownership of this — if Michelle Obama had worn this jacket, my head would have blown off," she said 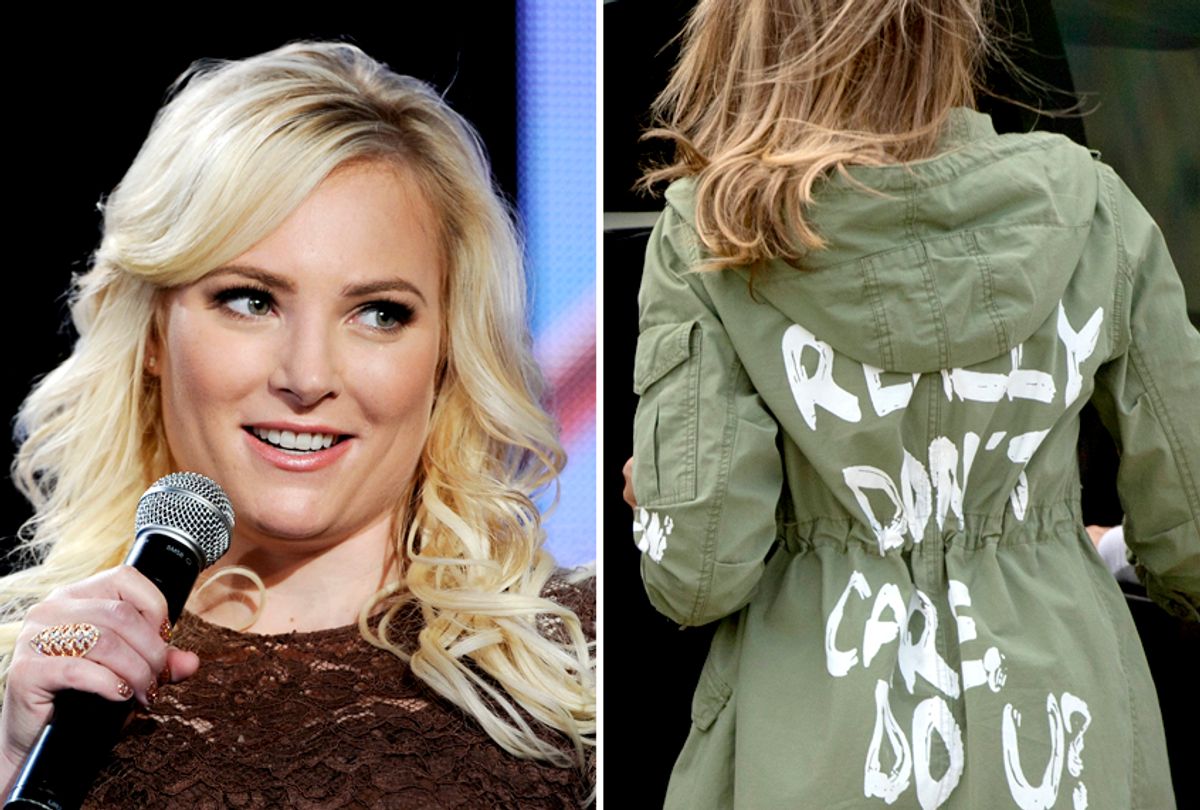 The co-hosts of "The View" tried to get to the bottom of first lady Melania Trump's decision to wear a jacket with the words "I really don't care, do u?" emblazoned across the back while visiting a detention center housing migrant children who had been ripped apart from their parents as a result of the Trump administration's zero tolerance policy.

Although Trump's wardrobe fiasco took place on Thursday, it was so bizarre – thoughtless at best, and callous at worst – that it has continued to draw attention in the media.

"She doesn't have any friends," co-host Sunny Hostin said on "The View" Monday. "She doesn't have close friends on her team. Because, you know, sometimes you may want to make a statement — wear something — and you have that friend that's like, 'Don't wear that, girl! Don't do it!'"

Meghan McCain, the panel's conservative voice, offered a poignant moment of self-reflection — and made a charge to her fellow Republicans.

"The first thing I want to say is — I have to take ownership of this — if Michelle Obama had worn this jacket, my head would have blown off on television, period," she said. "And I think Republicans have to be intellectually honest that, if we had another first lady walking around with a jacket saying, 'I really don't care, do u?'"

Conservatives repeatedly attacked former first lady Michelle Obama for her fashion choices, especially when she chose to wear sleeveless dresses and tops. Yes, first ladies and their staff had already done that for decades.

"The whole point of being first lady is that we care. We are here because we care," McCain continued. "This message is horrible."

For the record, it is still wholly unclear what message Trump was trying to advertise with her jacket.

"It's a jacket. There was no hidden message," her spokesperson Stephanie Grisham said last week. "After today's important visit to Texas, I hope this isn't what the media is going to choose to focus on."

The intense backlash lead the president to weigh in on Twitter. In a tweet, the claimed his wife had sent a message to the "Fake News Media."

"They often talk about how this administration is tone-deaf, but this is literally deaf," co-host Joy Behar said on Monday's show, adding that McCain had texted her the photo of Melania's jacket when the news first erupted last week.

Behar's first reaction was that the photo could not have been real.

"That's how absurd — you're on your way to visit children who are being held in cages, and this is what you wear?" Behar questioned.

"Everything a first lady wears is political," McCain said. "That's the whole point of it."

Co-host Whoopi Goldberg tried to give Trump the benefit of the doubt, arguing that perhaps the first lady had carelessly thrown on the jacket without pausing to consider the outcome.

If that turns out to be true, Goldberg blames the many people around her for allowing such a thoughtless fashion choice to move forward.

But she warned: "Don't let us find out at this table that you did that on purpose."

The comedian is "exhausted" by Trump, but not fearful. Behar explains why she's holding nothing back on "The View."