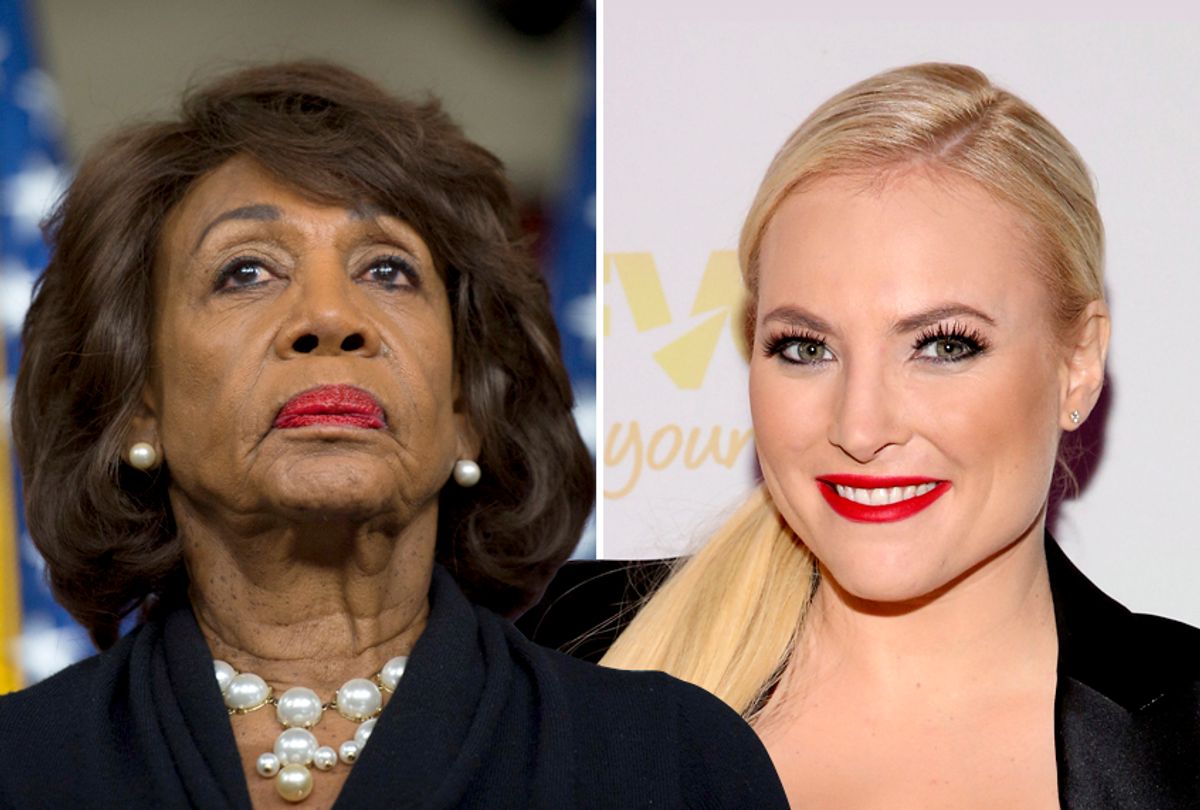 "Can I say one thing — because I am the only person that's been in a political rally, in a crowd where people have mobbed — it's dangerous," McCain interjected, seemingly referring to Waters' call for protesters to "get out," "create a crowd" and "push back" on Trump administration members when they're in public.

"The View" co-host went on to suggest that an attack on the Trump Administration is an attack on her and her family.

"As I said yesterday, and I'm saying it again, I have family in the Trump administration, so you're talking about me, as well, if I'm out to dinner with him," she said. "I agree with Sarah. I just think that we've got to be better as Americans and talk it out." (McCain's father-in-law, Douglas Domenech, is the current assistant United States secretary of the Interior for insular areas.)

"Both sides have to do it in the best way that they possibly can," the conservative co-host continued. "Or don't, please, lecture me about how one side goes high while the other one goes low because everybody is low right now," she said, referring to former first lady Michelle Obama's speech at the 2016 Democratic National Convention.

McCain first blasted Waters for her comments on Sunday.

"This is absolutely insane — and extremely dangerous," McCain tweeted in response to recent comments from Waters. "My father in law works in the administration, does this mean when we go out to dinner we should be ambushed?!?"

"Don't ever again give me any of the 'when they go low, we go high' lip service," she added, once again invoking former first lady Michelle Obama's 2016 Democratic National Convention speech.

"If you see anybody from that Cabinet in a restaurant, in a department store, at a gasoline station, you get out and you create a crowd and you push back on them, and you tell them they’re not welcome anymore, anywhere," she told supporters during a Los Angeles rally.

On Monday, the California Democrat responded to criticism that she called for violence against Trump's supporters by reading a list of times that Trump has used violent rhetoric.

During an appearance on MSNBC's "All In with Chris Hayes," Waters said critics, including President Trump, misunderstood her call on Saturday for protesters to confront members of his administration in public.

"He calls for more violence than anybody else," she said.

She held up a piece of paper to read from a list of times Trump has spoken of violence.

"Listen to some of his statements during his campaign and since he's been president," Waters said.

"Another violent statement — 'I'd like to knock the crap out of them,'" Waters recalled.

"Another one — 'Maybe he should be roughed up,'" Waters quoted.

Waters also pointed to the time when someone was removed from a May 2017 Trump rally in Massachusetts.

"Try not to hurt him, but if you do, I'll defend you in court. Don't worry about it," Trump said.

"If that's not creating violence and supporting violence, what is?" Waters asked. "I've said nothing like that."

The California lawmaker again disputed that she had told her supporters to physically harm Trump supporters.

"Trump is the one who is creating lies, trying to have people believe that I talked about harming people. There's nowhere in my statement any time, any place that we talked about harm," she said earlier on Monday.

"Protest is about peaceful resistance to the kind of actions that we are experiencing from this president," she continued.

Waters' recent remarks follow days of public outrage over the Trump administration's "zero-tolerance" policy of separating more than 2,000 migrant children from their parents after crossing the U.S.-Mexico border illegally.

Several Trump officials have been harassed in public as a result of the inhumane separations.

White House Press Secretary Sarah Huckabee Sanders tweeted on Friday night that she was asked to leave a Virginia restaurant because of her work defending Trump and his policies.

Stephanie Wilkinson, the owner of the Red Hen restaurant who had asked Sanders to leave, told reporters on Saturday that she is "not a huge fan of confrontation," adding, "I have a business, and I want the business to thrive." But, she continued, "This feels like the moment in our democracy when people have to make uncomfortable actions and decisions to uphold their morals."

Sanders works in an "inhumane and unethical" administration, Wilkinson said.