As teachers across the nation strike for better resources, health care costs should take front and center 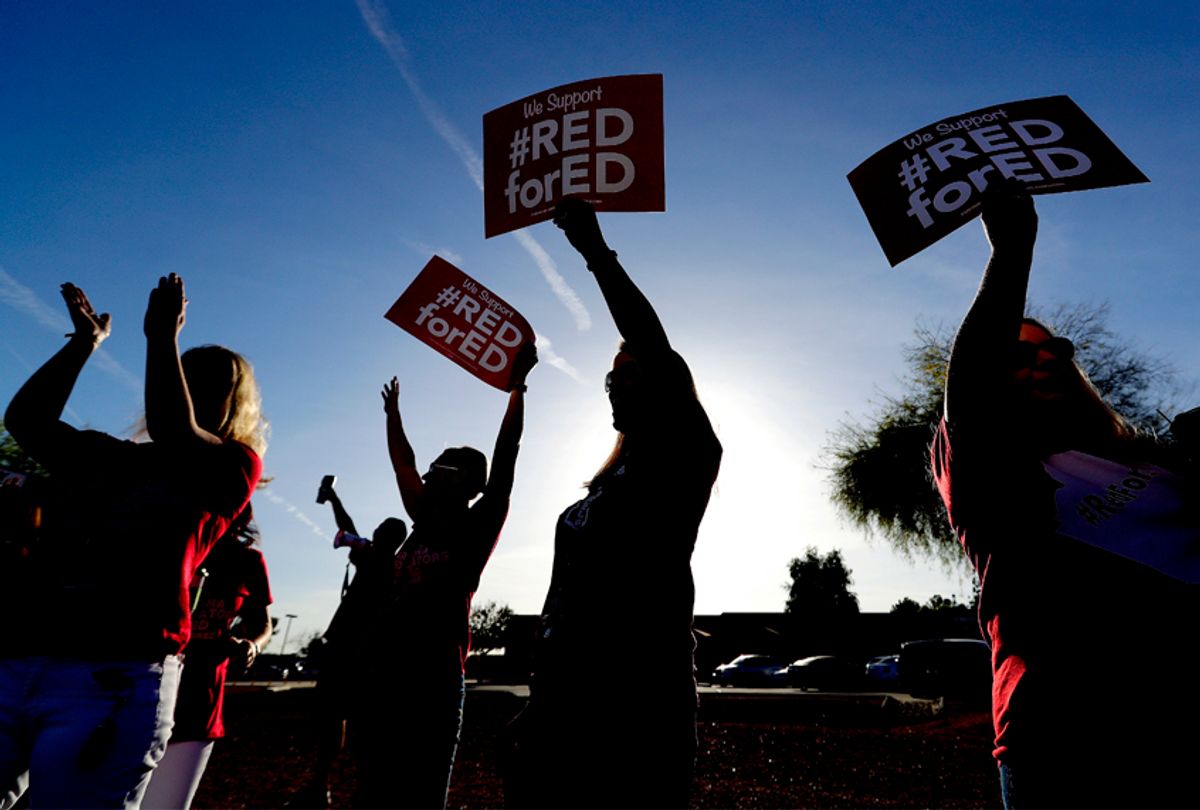 Teachers at Humphrey Elementary school participate in a state-wide walk-in prior to classes Wednesday, April 11, 2018, in Chandler, Ariz. (AP/Matt York)
--

As teacher strikes flared this spring in more than half a dozen states, from West Virginia to Arizona, protesters bemoaned stagnant salaries, overcrowded classrooms and a lack of basic supplies like textbooks and computers.

But often missing from hand-scrawled placards and fiery speeches was an issue that has contributed greatly to the financial woes of America’s schools: skyrocketing health care costs.

Many teachers, like other public employees, have traditionally accepted a trade-off: In exchange for relatively low salaries, they could expect relatively generous benefits, including pensions and low- or no-cost health premiums.

But in an era of $100,000-a-year drugs and government budget cuts, school districts are struggling to find the money to keep up their end of the bargain, forced to take away from classroom funding and even modest, cost-of-living raises. Many cash-strapped school boards, cities and legislatures view health care benefits as an unpredictable budget-buster.

Meanwhile, teachers are being asked to fork over more of their paychecks to keep their health coverage, even as budget cuts have impelled them to use their own money for classroom supplies and to crowdsource money to buy computers.

In Jersey City, N.J., where health care expenses have gone up an average of 10 percent annually as district funding has remained flat, teachers staged a one-day strike in March to protest rising costs.

But with an underfunded school system and a $110 million health care bill that is expected to increase another 13 percent this year, teachers and officials accepted a mutually imperfect solution that included changes to their health care plan to end the strike and avoid cuts that would have gutted local schools.

“We’re talking about 300 teachers being laid off to be able to afford our health care bill,” said Sudhan Thomas, president of the Jersey City Public Schools’ board of education.

While the teacher strikes have ebbed with the school year, deals brokered to end walkouts mostly offered temporary fixes, with no long-term solution in sight.

Proposed cuts to health benefits in West Virginia were also behind the first strike this year, shuttering the state’s public schools for nine days and inspiring similar protests in several states. When officials initially extended teachers a 1 percent pay raise, small in comparison to an imminent hike in their health insurance contributions, teachers rejected the offer.

“You really know you have arrived when you become a verb,” said David Haney, executive director of the West Virginia Education Association, whose wife is a teacher. “Don’t make me go West Virginia on you.”

A Pay Equation That Doesn’t Add Up

Teacher pay was below the national average of $59,660 in the six states that saw significant demonstrations this year — West Virginia, Oklahoma, Arizona, Kentucky, Colorado and North Carolina. But teachers are losing ground nationally.

The average teacher salary in the United States has decreased by 4 percent since 2009, adjusted for inflation, according to a report released in April by the National Education Association, an advocacy group for public school teachers. During that time, public schools have seen their revenue shrink, with federal funding dropping 19.5 percent, particularly after Congress’ across-the-board spending cuts known as budget sequestration took effect in 2013.

As funding has declined, the cost of health insurance has gone up. State and local governments paid 14.5 percent more last year to cover a primary, secondary or special education teacher and her or his family than they did in 2008, adjusted for inflation.

According to that data from the Bureau of Labor Statistics (BLS), in March 2017, family coverage for one teacher cost state and local governments an average of $1,010.85 per month.

Put another way, a 2015 report from the George W. Bush Institute’s Education Reform Initiative estimated that it cost about $550 per pupil to cover American teachers’ insurance expenses.

Educators have also felt the sting of growing health insurance costs, especially as officials have shifted some of the burden to them. Primary, secondary and special education teachers paid 25.4 percent more last year to insure themselves and their families than they did in 2008, according to BLS data adjusted for inflation.

For early-career teachers, that price is especially unmanageable. In Pueblo, Colo. — where teachers secured raises and an additional $50 a month toward health insurance premiums after walking out in May — a new teacher makes $35,277, according to Suzanne Ethredge, president of the Pueblo Education Association.

And even where school systems offer teachers generous plans, with low deductibles and minimal premium contributions, the educators frequently have to pick up the costs for family members.

The standoff in West Virginia typified the strains in states grappling with rising benefit costs on budgets strained by tax cuts and the recession.

Last fall, the Public Employees Insurance Agency floated the ideas of slashing the number of salary tiers used to calculate contributions, adding spouses’ salaries in those calculations and charging per person for family coverage rather than a flat fee.

The agency further announced that state employees would soon be required to use a wellness app called Go365, incurring penalties for failing to meet their health goals or for declining to use the system altogether.

So when state lawmakers proposed a mere 1 percent raise to an average salary of just $45,555, teachers pushed back. They refused to return to work until officials agreed to a 5 percent raise, scuttled the Go365 plan and delayed the health care hikes so a task force could review them.

In Oklahoma, the strikers publicly focused their complaints on operational costs like textbooks and salaries. They secured roughly an extra half a billion dollars, said Alicia Priest, president of the Oklahoma Education Association. “We got everything that we could out of legislators this year,” she said.

But Priest said health care costs remain a serious issue for school personnel. While the state covers teachers’ individual premiums, covering a spouse and children can cost an additional $1,200 per month, she said — a significant portion of a teacher’s starting salary.

She said that some teacher aides work only for the health insurance for their families — in some cases writing a check to the district to cover the difference between meager salaries and their premiums.

While the advent of summer break has calmed the protests, future strikes look likely, said Paul Reville, a professor at the Harvard Graduate School of Education and former Massachusetts secretary of education. The fact that most teachers negotiated at least some concessions proved the tactic effective enough, especially as health care costs continue to rise.

“The shoe is pinching,” he said, “and people are reacting.”