Another Supreme Court seat: Another big win for Mitch McConnell and the anti-abortion movement 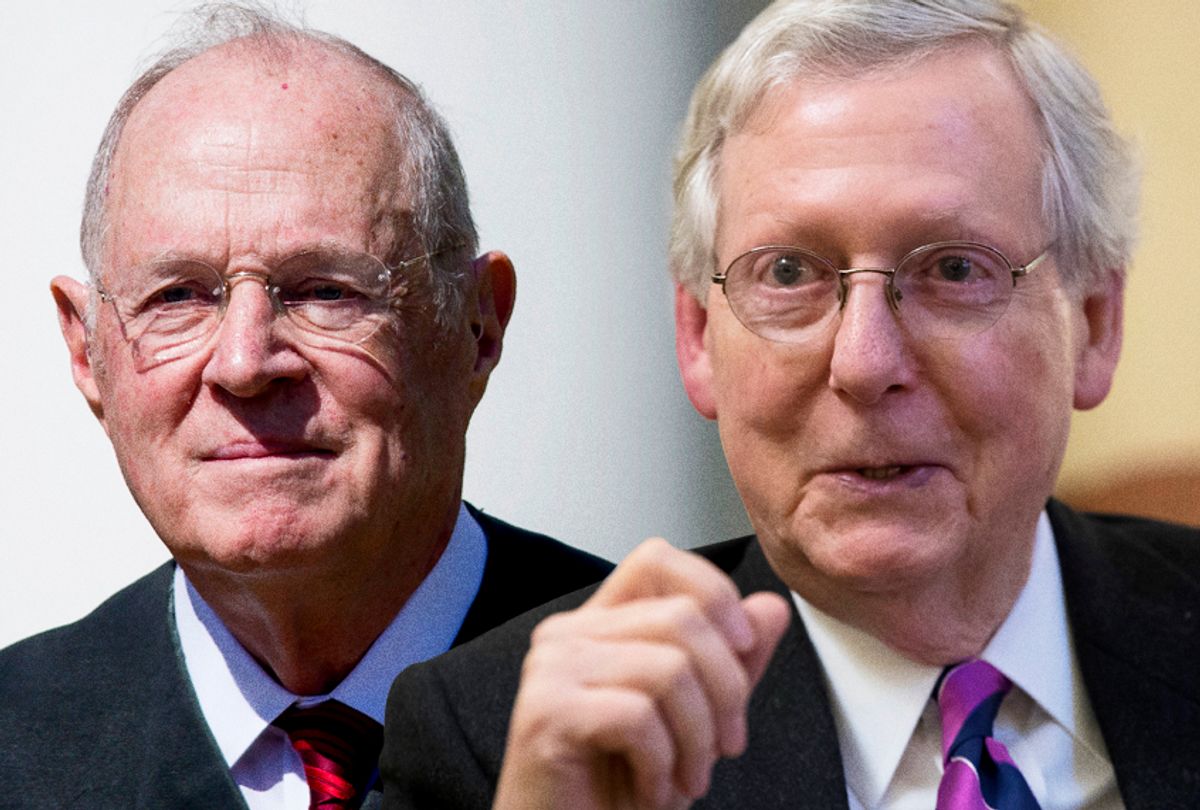 One of the first major official acts of the Trump administration, when everyone was still shell-shocked and not quite sure how bad it was really going to be, was the nomination of Neil Gorsuch to fill the Supreme Court seat that had remained open following the death of Justice Antonin Scalia the previous year.

In an unprecedented act of cynical partisanship, Senate Majority Leader Mitch McConnell essentially stole the seat for the Republicans by brazenly denying a vote to Merrick Garland, Barack Obama's nominee, for eight months. He was rewarded for that exercise of raw political power with a hard-right justice who is dedicated to protecting and advancing the conservative agenda for as far as the eye can see. It was the triumph of McConnell's career.

But it almost didn't happen. The Washington Post reported several months later that Trump had nearly withdrawn the Gorsuch nomination before it even came to a vote:

Trump, according to several people with knowledge of the discussions, was upset that Gorsuch had pointedly distanced himself from the president in a private February meeting with Sen. Richard Blumenthal (D-Conn.), telling the senator he found Trump's repeated attacks on the federal judiciary "disheartening" and "demoralizing."

The president worried that Gorsuch would not be "loyal," one of the people said, and told aides that he was tempted to pull Gorsuch's nomination — and that he knew plenty of other judges who would want the job . . .

When Sen. Lindsey Graham asked whether the president might be subject to prosecution, Gorsuch reportedly answered, “No man is above the law, no man.” At some point in all this, the Post reported that Trump got livid:

"He's probably going to end up being a liberal like the rest of them," Trump told Republican leaders, according to a person with knowledge of the comments. "You never know with these guys."

The president wasn't just venting. It was serious enough that McConnell had to do some significant hand-holding and cajoling to prevent Trump from yanking Gorsuch from consideration. Several people confirmed to the Post that Trump was also angry that Gorsuch wasn't sufficiently grateful for the nomination, prompting the staff to scramble to find a note the nominee had sent to the president. It read, in part:

Your address to Congress was magnificent. And you were so kind to recognize Mrs. Scalia, remember the justice, and mention me. My teenage daughters were cheering the TV! . . . The team you have assembled to assist me in the Senate is remarkable and inspiring. I see daily their love of country and our Constitution, and know it is a tribute to you and your leadership for policy is always about personnel. Congratulations again on such a great start.

The note apparently eased the president's mind, and he dropped his threats to rescind the nomination. I've seen no reporting that Trump asked Gorsuch personally for a loyalty pledge as he did others, but it wouldn't be surprising. In any case, that obsequious thank-you note indicates that he got it.

It was not clear at the time that the president himself would be implicated in a massive counterintelligence investigation that would span continents or that inappropriate questions of "loyalty" would lie at the heart of a criminal investigation into whether or not he obstructed justice. But it does fit the pattern.

It may be that in the early days, people around Trump chalked up his behavior to a basic lack of knowledge about how government functions. But from the beginning he has had a weird propensity for demanding personal fealty from powerful cops, prosecutors and judges. He may not be schooled in political science, but he knows how the Mob works.

Today we know that Trump may very well have been thinking more personally when he demanded loyalty from some of these people. He is facing very serious legal trouble, some of which may very well end up before the Supreme Court. The court could be asked to decide whether a sitting president can be indicted and whether he must comply with a grand jury subpoena. They might even have to rule on whether a president can pardon himself. There are cases about the U.S. Constitution's emoluments clause working their way through the courts. Will there be cases pertaining to Trump's taxes or to various forms of fraud uncovered in the Cohen investigation? Will he have to sit for a deposition in the Stormy Daniels case? The man is a walking legal nightmare.

And yet, with the retirement of Justice Anthony Kennedy, he will get to choose yet another of the justices who may well decide his fate. Will Trump privately demand his or her loyalty too? Will he get it?

So far, Democrats seem to be pinning their hopes on the argument that it would be hypocritical for McConnell not to delay the vote until after the midterm election in November, since he did that to Obama. That's very unlikely to work. McConnell will smirk and say, "What is this hypocrisy you speak of?"

There is some talk about getting retiring Sen. Jeff Flake, R-Ariz., to stand by his pledge not to allow any judges to be confirmed until Trump lifts his tariffs. But if history is any guide, Flake will not be the guy who stands in the way of a right-wing Supreme Court justice. The most serious strategy is to pressure pro-choice Sens. Lisa Murkowski, R-Alaska, and Susan Collins, R-Maine, to vote against any Trump nominee, on the reasonable assumption that Trump's pledge only to choose anti-abortion judges means that with one more conservative on the Supreme Court there will now be the votes to overturn Roe v. Wade.

That probably has the best chance of blocking the nomination, but it too is a long shot. The nominees will be well coached to say they have a completely open mind and will always respect precedent. Both of those senators' commitments to principle and common sense will be tested as never before.

Considering his mercurial nature, it's also possible Trump himself could destroy the nomination with some ill-timed tweet or a temper tantrum. He no longer listens to anyone, so it's doubtful that McConnell would be able to talk him down a second time. So perhaps another strategy for Democrats would be to press the nominee as aggressively as possible in public hearings about all the potential Trump crimes in detail and dare him to be "disloyal" while the president is watching.

Since it's absolutely true that no man should be able to choose his own judge, they could ask if the nominee plans to recuse himself from any of these potential Trump cases. We know how Trump feels about his minions' recusing themselves. He's said many times that if Jeff Sessions had told him he was going to do that, he would have withdrawn Sessions' nomination as attorney general. Maybe the president would well and truly sabotage himself this time.