Anthony Kennedy's feeble farewell to Donald Trump: Please don't use the power we've given you! 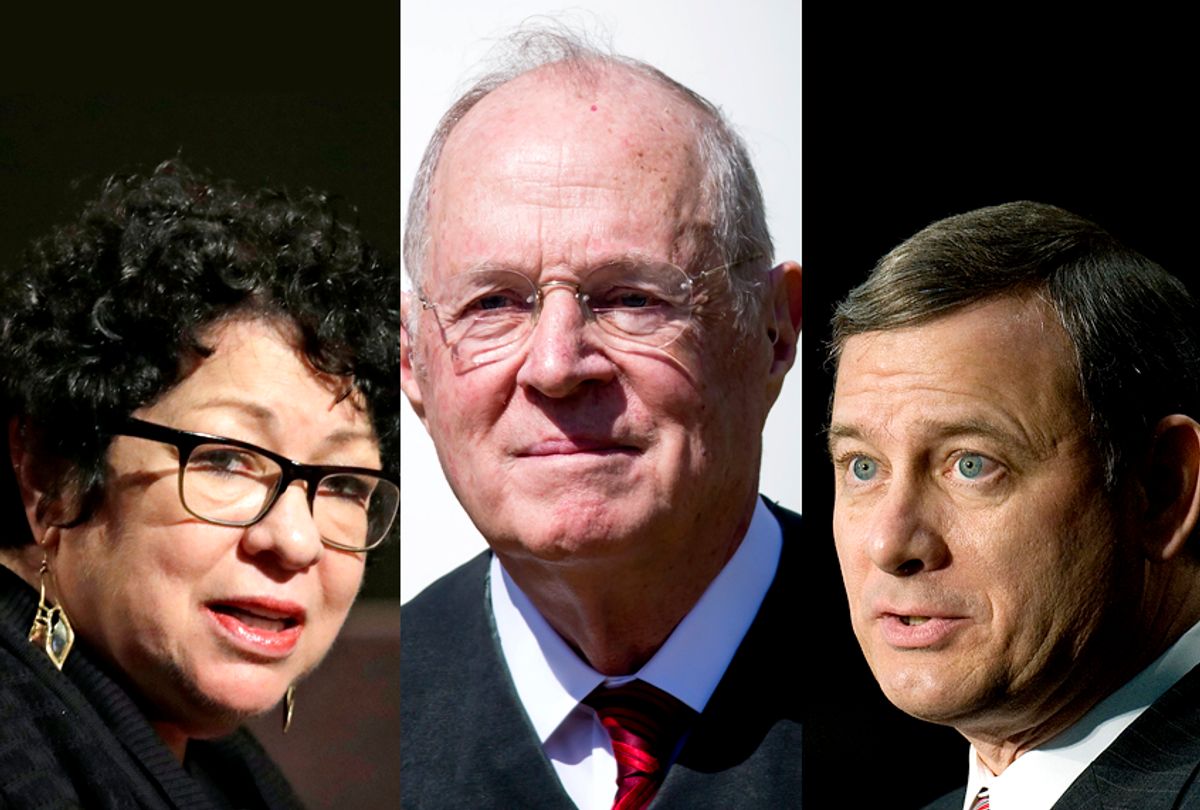 On Tuesday morning, by a narrow vote of 5 to 4, the Supreme Court upheld Executive Order 13769, titled “Protecting the Nation From Foreign Terrorist Entry Into the United States.” Called by critics the "Muslim ban,” the order was signed by President Donald Trump on Jan. 27, 2017 -- a week after his inauguration -- and affected immigration and all other forms of visa entry from Iran, Iraq, Libya, Somalia, Sudan, Syria and Yemen, all of which are majority Muslim countries.

The decision came as a major blow to Trump's opponents: The case against the order felt cut-and-dried. Over the course of the last three years, Trump has made numerous detrimental comments about the Muslim faith and done little to hide his desire for a discriminatory immigration policy. Even the order itself was worded as such as to give preferential treatment to “religious minorities” in these countries who might face persecution -- in other words, Christian immigrants.

Penning the court’s decision, Chief Justice John Roberts wrote that the order fell within the president’s authority, saying the president has “ample power” to do so and that comments Trump had made in the past regarding his intentions for such an order to focus exclusively on Muslims were not necessarily determinative in its final state. Roberts wrote that the plaintiffs had argued that the president had violated "fundamental standards of respect and tolerance. . . . But the issue before us is not whether to denounce the statements. It is instead the significance of those statements in reviewing a Presidential directive, neutral on its face . . . but also the authority of the Presidency itself.”

This is some incredible maneuvering in terms of intent. The signal being sent by the court is quite clear: You can intend the law to be discriminatory, admit its discriminatory intent in public and even follow through on that, as long as the law is written without clear animus.

Justice Sonia Sotomayor’s dissenting opinion was unequivocal in its disagreement: “Ultimately, what began as a policy explicitly ‘calling for a total and complete shutdown of Muslims entering the United States’ has since morphed into a ‘Proclamation’ putatively based on national security concerns. But this new window dressing cannot conceal an unassailable fact: the words of the President and his advisers create the strong perception that the Proclamation is contaminated by impermissible discriminatory animus against Islam and its followers.”

As Justice Anthony Kennedy announced on Wednesday his intent to retire in July, his second opinion in concurrence with the decision reads like a man constrained by the law but desperate to sound an ominous alarm before he exits:

In all events, it is appropriate to make this further observation. There are numerous instances in which the statements and actions of Government officials are not subject to judicial scrutiny or intervention. That does not mean those officials are free to disregard the Constitution and the rights it proclaims and protects. The oath that all officials take to adhere to the Constitution is not confined to those spheres in which the Judiciary can correct or even comment upon what those officials say or do. Indeed, the very fact that an official may have broad discretion, discretion free from judicial scrutiny, makes it all the more imperative for him or her to adhere to the Constitution and to its meaning and its promise.

The First Amendment prohibits the establishment of religion and promises the free exercise of religion. From these safeguards, and from the guarantee of freedom of speech, it follows there is freedom of belief and expression. It is an urgent necessity that officials adhere to these constitutional guarantees and mandates in all their actions, even in the sphere of foreign affairs. An anxious world must know that our Government remains committed always to the liberties the Constitution seeks to preserve and protect, so that freedom extends outward, and lasts.

In other words, the order was dressed appropriately in presidential power in accordance to national security, but the laws of the United States of America are only as good as the people wielding them. It doesn’t take much energy or time to read Kennedy’s opinion and discern a dire warning that Trump has found a loophole in America’s laws – primarily in embracing the vast overreach of executive powers in a post-9/11 world – and the only thing standing in his way is the vague hope that he may respect the country and its principles too much to abuse it.

I was in the crowd aboard the USS Yorktown in Mount Pleasant, South Carolina, on Dec. 7, 2015, when Donald Trump announced his proposed Muslim ban. “Donald J. Trump,” he read from a statement, “is calling for a total and complete shutdown of Muslims entering the United States until our country’s representatives can figure out what the hell is going on.”

The supporters in the belly of the aircraft carrier broke into rapturous cheers, some trying to start a chant of “USA! USA! USA!” and some pumping their fists, while others screamed, “Get them the hell out!” Following the announcement, Trump’s base talked among themselves about how their candidate was going to rid America of Muslims and return the country to its former glory, a hope they punctuated by using racial slurs in triumphant conversation.

Likewise, there was no need for disambiguation the day before that when Trump, a guest on CBS’ "Face the Nation," spoke about the possibility of closing mosques, saying, “If you have people coming out of mosques with hatred and death in their eyes and on their minds, we’re going to have to do something,” or a week later when he told Fox News, regarding Muslims, “They’re sick people.”

Later, in March, a defiant Trump told CNN’s Anderson Cooper, “I think Islam hates us.” Then, in July, just days after becoming the official nominee of the Republican Party, Trump defended his Muslim immigration ban to "Meet the Press" host Chuck Todd by saying, “Why are we committing suicide?”

Throughout his turn as a national political figure, Donald Trump has made no bones about his intentions to deny Muslims access to the country or his inherent prejudices against the religion. He’s floated the possibility of shutting down their houses of worship or instituting religious profiling and has made up bald-faced lies meant to frame them as dangerous, un-American outsiders, including a widely debunked story that he saw “thousands” of them celebrating the tragic attacks of September 11th.

But the rhetoric of Campaign Trump took a turn once he entered the office and realized he wasn’t going to be able to get away with openly discriminating against the Islamic faith. As Rudy Giuliani, one of Trump’s intimates, explained on Fox News the day after Trump signed Executive Order 13769, “When he first announced it he said, ‘Muslim Ban.’ He called me up, he said, ‘Put a commission together, show me the right way to do it legally.’”

And that’s exactly what they did.

Early on in his administration, Trump figured out how to enact his prejudiced plan while avoiding legal repercussions. The action he took was to author an executive order – a mostly modern phenomenon, in that the presidency has ballooned in strength and authority since the turn of the 21st century – based in "national security," a nebulous concern that has cloaked almost every action of the presidency since the terror attacks in 2001.

In the wake of 9/11, America has ceded incredible powers and trust in the president to wage the so-called War on Terror. Whether it is strikes against presumed enemy combatants or engaging fighters across nation-state boundaries, modern presidents have enjoyed unprecedented leeway in prosecuting war without seeking approval from Congress. In a manner of speaking, this was seen as the price of doing business in a modern conflict against an enemy without a state. Although it clearly encroached upon the constitutional framework enacted by the founders, citizens and legislators alike allowed it in the naïve hope that no president would ever abuse the power. They assumed, wrongly, that anyone aspiring to the highest office in the land would be possessed of duty, restraint and a degree of patriotism that would overcome selfish considerations.

Donald Trump, in case you haven't noticed, isn’t like any other president. We now have an ominous situation in which those unparalleled powers are being exercised by a man who doesn’t respect the Constitution or the principles of the United States. In Anthony Kennedy’s opinion (a concurrence, not a dissent) he appeals to a deference that simply no longer exists. This provides an exceptional difficulty: When democracy, an arbitrary construct, relies on its participants to both recognize and revere the institution, what happens when the executive doesn’t conduct itself in good faith?

The constitutional drama surrounding Executive Order 13769 is new territory: Trump clearly intended to carry out a plan drenched in racial and religious persecution but managed to use the Constitution against itself. The Supreme Court, both in its upholding and the accompanying dissent, recognizes the possibility of ill intent but judged itself powerless to counteract it based on precedent. Trump has found the vestiges of power from the War on Terror to be a nearly boundless reservoir of authority completely separate from the checks and balances set out in the Constitution. Until and unless some future court contradicts the last 17 or so years worth of practice, that power will remain unchecked.

Kennedy’s opinion is a message to both the public and the president himself. On his way to retirement, Kennedy appears to be telling the American people that the executive branch has effectively outclassed the judicial branch. Barring a proactive and aggressive remedy, the issue is game, set and match.

To the president, Kennedy presented an even more impotent appeal: You can do this, but you shouldn’t.