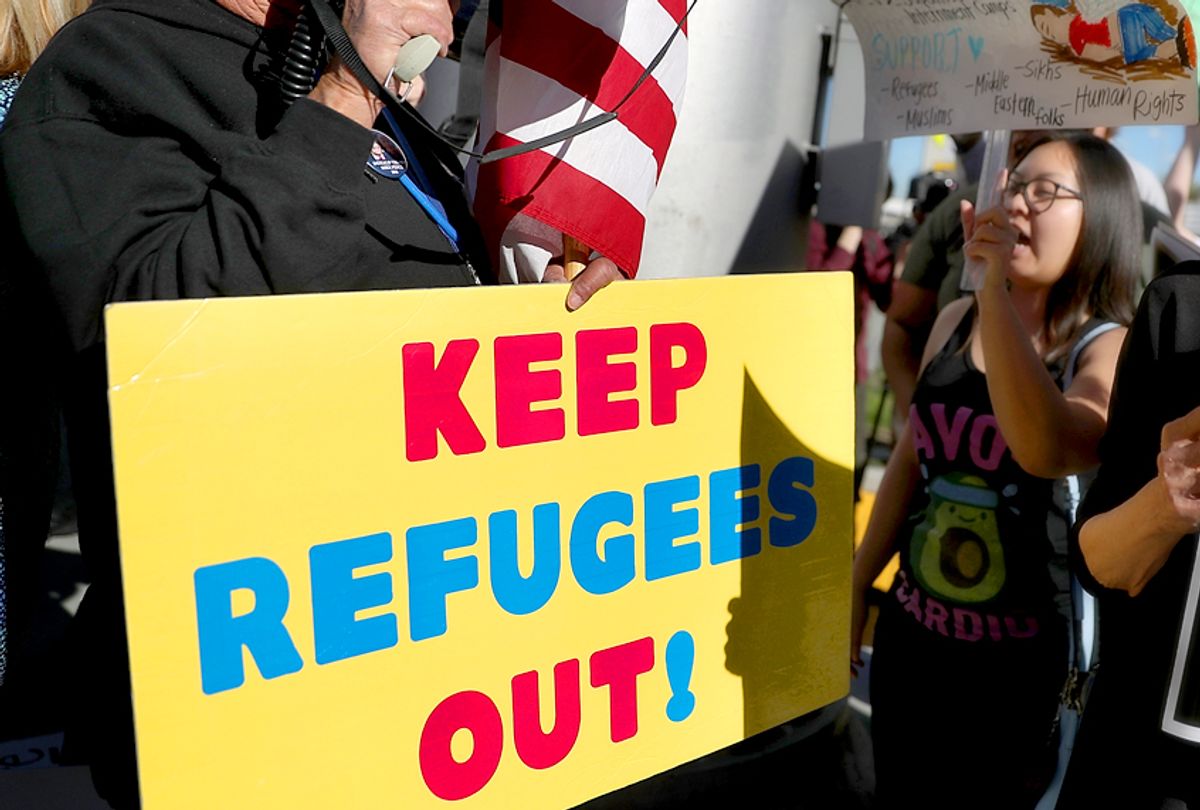 A protester faces off with a supporter of Donald Trump during a demonstration at LAX against the travel ban imposed by Trump. (Getty/Justin Sullivan)
--

Donald Trump looks outward from the United States with dreams of walls on the U.S.-Mexico border that will somehow magically stop what he and his supporters consider/view as a brown "invading" horde, human "vermin" that will "infest" white American society. Nonwhite immigrants and migrants are also to be put in concentration camps by the tens of thousands for an indefinite amount of time while Trump and his enforcers decide how best to remove them from the country.

Trump's racially authoritarian presidency should not be a surprise. He has been remarkably direct and transparent during his public life about his bigotry and disdain towards those who are not white and Christian. The prison camps and detention centers (including prisons for babies) which Trump and his enforcers have created for brown and black migrants and refugees were previewed by his public hostility towards and campaign against Muslims.

Ultimately, Donald Trump's racism, nativism and bigotry have such great power because many millions of white Americans (and an entire political party) share his values. In all, Donald Trump is a symptom, not a cause, of much deeper problems in American society.

New research from Dalia Mogahed, who is the Director of Research at the Institute for Social Policy and Understanding, and The George Washington University political scientist John Sides, in conjunction with The Democracy Fund Voter Study Group (a voter sentiment research collaboration of analysts and scholars from across the political spectrum) details the wide range of bigotry towards Muslims in America and how such attitudes harm the country's social fabric and democracy.

Their new report “Muslims in America: Public Perceptions in the Trump Era” finds that:

Unique data from the July 2017 wave of the VOTER Survey (Views of the Electoral Research Survey), as well as other surveys, reveal that Americans’ attitudes toward Muslims in the U.S. are distinctly unfavorable. Although Americans ascribe some positive traits to most Muslims — such as caring about their families — they ascribe negative traits to many Muslims as well. This negative stereotyping of Muslim Americans is more prevalent than stereotyping of Christians. It is also quite out-of-step with the actual attitudes and characteristics of Muslim Americans....

Finally, there is substantial support for policies targeting Muslims — including restrictions on travel to the U.S. from Muslim-majority countries, surveillance of mosques in the U.S., and screenings at airports. Nearly one-in-five Americans would even deny Muslims who are U.S. citizens the right to vote. The civil rights and liberties of Muslim Americans have a tenuous status in American public opinion.

Thus, the social equality of Muslims faces significant hurdles. These hurdles will be even harder to overcome given our present political discourse, when harsh characterizations of Muslims come not only from the fringes of American political life, but from elected officeholders at all levels of government.

Authoritarians--a group which also overwhelmingly supports Donald Trump and the Republican Party--also possess great animus towards Muslims. This hostility is also directed at nonwhites and those groups viewed as "un-American" more generally.

Dalia Mogahed and John Sides' research explains this as:

Negative stereotypes of many racial, ethnic, and religious minority groups are often tied to a constellation of culturally conservative or ethnocentric values. Stereotypes of Muslims showed this same pattern. Views of Muslims were more negative among those who identified as conservative, those who tended to prioritize conformity, those who believed that being Christian was important to being American, and those who did not believe that growing racial diversity would enrich the United States. Similarly, those who expressed some support for nondemocratic political systems — having “the army rule” or a “strong leader who does not have to bother with Congress or elections” — had less favorable views of Muslims.

The “Muslims in America: Public Perceptions in the Trump Era" report concludes:

Ironically, one change agent has been President Trump himself. His often controversial views of Muslims appear to have produced a backlash among Democrats and independents, both of whom became more favorable toward Muslims and Islam in 2015–2016. As a result, opinions among Americans, overall, have become more favorable. The challenge, however, is that the views of Republicans have not shifted as much, if at all, in that direction. Democrats and Republicans have become more polarized on this issue, as on many other issues.

In the meantime, growing partisan polarization in views of Muslims and Islam only invites greater political conflict. Muslims’ own experiences reflect this conflict. In the 2016 ISPU survey, 42 percent of Muslim children in K–12 schools reported being bullied because of their faith, compared with 23 percent of Jewish children, 20 percent of Protestants, and 6 percent of Catholics. (One in four cases of bullying Muslim children involved a teacher or administrator as the bully.) Similarly, 60 percent of Muslims reported discrimination because of their religion, compared to 38 percent of Jews, and less than 20 percent of Protestants and Catholics. Muslims (38 percent) and Jews (27 percent) were also the religious groups most likely to fear white supremacist threats to their personal safety or that of their family because of the 2016 election.

I recently spoke with Dalia Mogahed and John Sides about their new research on bigotry towards Muslims, what their findings reveal about the rise of Donald Trump and the extreme right-ward turn of the Republican Party, and the serious threat to American democracy represented by animus and racism towards Muslims and other groups.

Your new research is damning for what it reveals about anti-Muslim animus in the United States. How do these attitudes vary over time? Are they fixed? More intense at some moments than others?

Dalia Mogahed: You are correct of course, the results are indeed extremely concerning.  It is important however to point out that even according to our research, while the percentages are much higher than any one who cares about equality would want, most Americans do not hold these views.  It is important to hold the basic truth that our country’s social and moral norms still fall on the side of at least basic acceptance of Americans that are Muslim.  That said, according to my research, negative public opinion regarding Muslims ebbs and flows in concert with domestic political rhetoric and not violent acts carried out by Muslims in the name of Islam. Spikes in negative public perception of Muslims tracks against election cycles, especially among Republicans, as well as the run up to war with Muslim majority countries, and not actual terrorist attacks carried out by a Muslim.

As you point out, these trends are indeed “damning” for what they suggest about the degree to which we are all being manipulated by a political agenda that benefits from fear. Notice that our report also found that holding anti-Muslim perceptions is correlated with greater support for authoritarian views. Fear kills freedom.

What do we know about how Donald Trump and the Republican Party's hostility towards Muslims influenced the outcome of the 2016 presidential election?

Mogahed: Unfortunately, those sentiments were key motivators for many Trump voters as has been documented by several subsequent studies following the election.  When voters are motivated by fear or hatred of “the other” they also tend to favor a “strong leader” and be more willing to relinquish basic freedoms and surrender power to the government-- hardly core conservative values.  But that’s just it, when people are manipulated by false information and fear they act in opposition to their own interests and values.

Anti-Muslim animus is a powerful type of political currency. What does your new research--and other work--reveal about its dimensions and how it plays out among the electorate?

I view these negative perceptions as a "reservoir" of sentiment that can be mobilized by political entrepreneurs. In 2016, for example, Trump's focus on the threats posed by Muslims -- and Clinton's rejection of that view -- made the public's perceptions of Muslims more related to their preference for Clinton or Trump than had been true in recent presidential elections.

That helped Trump more than Clinton. There had long been a substantial fraction of Obama voters with less favorable views of Muslims, and the campaign's focus on Muslims arguably helped shift some of those voters to Trump.

How do you measure anti-Muslim animus? How does it compare to "prejudice" and "racism"?

Mogahed: Islamophobia, or anti-Muslim animus, prejudice or even “racism” take many forms.  One is on the social level, which is what our report measures.  This is manifested in everything from micro-aggressions or discrimination against Muslim perceived individuals to targeted attacks on Muslims and those perceived to be.  According to the Institute for Social Policy and Understanding (ISPU)’s 2017 and 2018 poll of American Muslims, Jews, Catholics, Protestants and those of no faith, Muslims are the most likely to report experiencing discrimination because of their religion.  But it is important to note that this is not the only — or even the most harmful — way Islamophobia is operationalized.

There is also State-sponsored Islamophobia, in the form of the criminalization of Muslim communities through the unfounded use of mass surveillance of Muslim institutions, discrimination at the border and in the immigration process, the overuse and misuse of sting operations and a “countering violent extremism” framework that casts an entire religious community as a pool of suspects.  A recent ISPU report found that a Muslim perceived man accused of an ideologically motivated crime receives an average of four times the jail time as someone not perceived to be Muslim accused of a nearly identical ideologically motivated crime.

There is other research which demonstrates the role of white Christian nationalism in support of Donald Trump. Does your work complement those findings?

Sides: Our report comes from a survey conducted months after the election. So it's not an account of what happened in 2016. But as I noted above, views of Muslims did play a larger role in voters' choices in 2016 than in recent elections. (That's based on other analysis from my forthcoming book on the election.) But what happened during the campaign and since the election is perhaps counterintuitive: views of Muslims also became more favorable. A variety of surveys show this. The main reason is that Democratic views of Muslims have shifted — arguably in reaction to Trump.

As a result, Democrats and Republicans are now further apart in their views of Muslims. This is a troubling dynamic. Increasingly, the parties differ in their views on a host of issues connected to racial, ethnic, and religious minorities. That sets the stage for an increasingly divisive and emotionally charged politics.

Is there any political cost to Republicans for embracing anti-Muslim bigotry as a political strategy?

Mogahed: As for any political cost for expressing anti-Muslim sentiment, there does not appear to be much of a cost in the Republican party.  Ironically however, this vitriol has actually improved American public opinion of Muslims over all, as Shibley Telhami recently discovered in his study. The bright side of all this is that far from demobilizing Muslims, it has coincided with a surge in Muslim civic engagement.

Considering this new research (and your other work) what causes you the most worry about American democracy in this moment and what gives you hope — if anything?

Mogahed: What causes me the most worry about American democracy is the fact that such a significant percentage of our electorate is misinformed about people they perceive to be unlike them and are voting and approving of policies based on misinformation.  Thomas Jefferson always taught that a well informed citizenry was the bedrock of our democracy which means the very foundation of our freedom is being undermined with fear mongering and demagoguery.

What does give me hope is that this type of thinking is still not the new normal.  It is still a vocal minority of Americans despite the ubiquitous anti-Muslim political rhetoric and  media imagery.