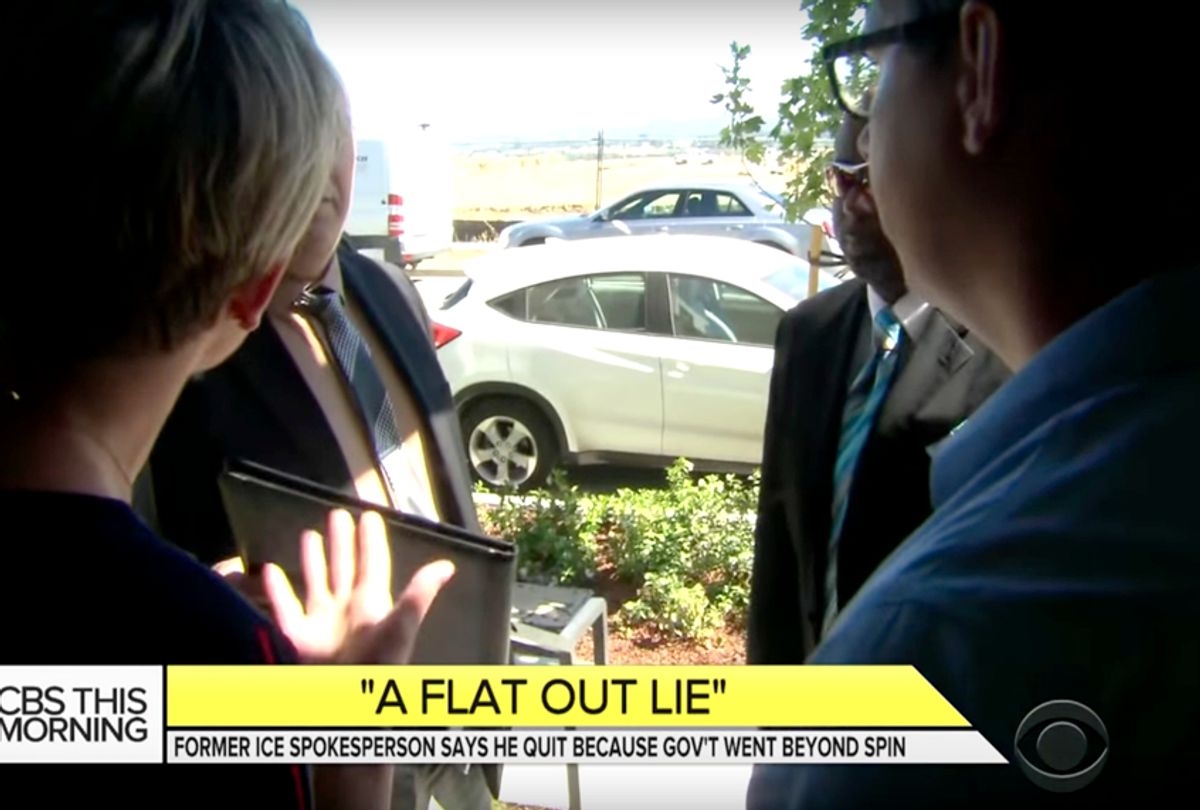 Former ICE spokesman James Schwab opened up to CBS News on Wednesday to discuss his decision to resign from the agency after what he alleges was a request by the Trump White House to lie about the effects of Oakland Mayor Libby Schaaf's warning to hundreds of undocumented residents of Northern California that a government sweep of the region was pending. Midway through the interview, however, Schwab and CBS News reporter Jamie Yuccas were unexpectedly interrupted by a knock on the door of Schwab's home.

Schwab turned in his resignation as an ICE spokesman shortly after he'd been allegedly directed to divert questions from the press after Attorney General Jeff Sessions and Acting ICE Director Thomas Homan provided what he says are incorrect statements that claim nearly 800 undocumented immigrants had avoided capture due to Schaaf's warning.

"After they failed to correct it – it's a flat-out lie. They know it's a lie. It was just shocking to me that no one wanted to fix that," Schwab said to CBS News.

Then two men who identified themselves as agents of the Department of Homeland Security Inspector General's Office knocked on the front door. Their surprise visit was caught on camera.

In the footage aired Thursday morning, the agents repeatedly told Yuccas they couldn't speak with her after she asked why they are there.

"I'm talking to [Schwab]" one agent said. "This is confidential."

"Why, three months later, are we doing this?" Schwab asked Yuccas after the agents left. "This is intimidation," he added, "and this is why people won’t come out and speak against the government."

According to Schwab, the agents accused him of being involved in Schaaf's advisory about an upcoming immigration raid, reportedly claiming that he had possibly clued the mayor that the sweep was coming.

He also said that ICE's internal communications about the arrests were immensely different than the government's public excoriation of the Oakland mayor.

"We ended up arresting 232 [people], which is 16 percent higher than our highest estimates. So internally, that was considered a success," Schwab said. "But what they publicly said was that she let people go."

Schwab's interview comes as thousands of children have been ripped away from their parents as a result of President Donald Trump's "zero-tolerance" immigration policy that treats all unauthorized border crossings as prosecutable crimes.