Planet of refugees: Children make up more than half of the displaced

The wounds caused by resettlement are deep and incalculable 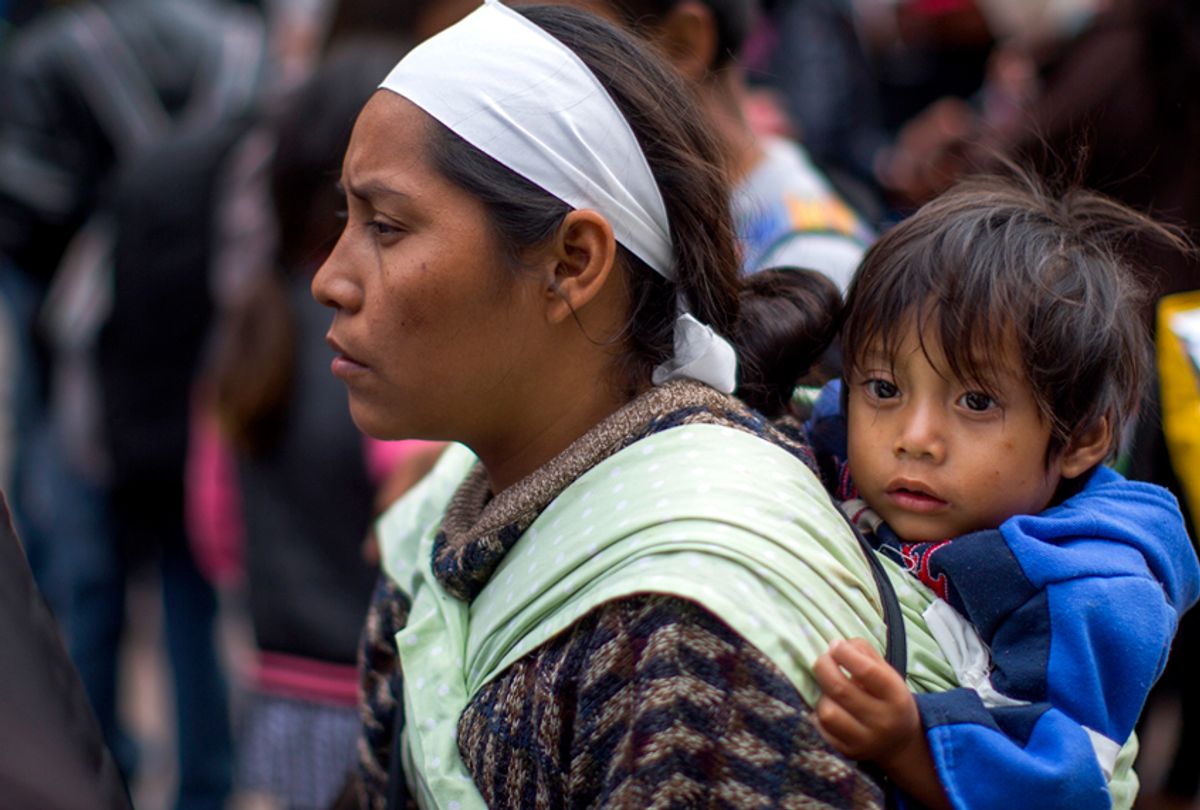 Members of a caravan of Central Americans who spent weeks traveling across Mexico walk from Mexico to the U.S. side of the border to ask authorities for asylum. (Getty/David McNew)
--

Your mind is fixed on the U.S.-Mexico border. You are watching the images of the children, arrested by the U.S. border patrol and taken into detention. You have seen a picture of a bus with car seats to cart babies to prison. You are heartsick.

You read that many of these children are from Central America, places whose governments have been overthrown by the United States and whose societies have been pulverized by the Cold War and by the War on Drugs. You remember the Death Squads of the Cold War, but you also know that their violence is comparable to the Death Squads of the Drug Armies of the Drug Lords and of the Narco-States that pretend to fight them. You know that these children have fled fields ravaged by unfair trade policies and by the constant sound of gunfire.

You read an Associated Press story about 13,000 refugees who are sent — sometimes at gunpoint by the Algerian military — into the Sahara Desert. You read a sentence by Lori Hinnant, the Associated Press reporter, and you find your breathing hasten — “The Sahara is a swift killer that leaves little evidence behind.” It startles you to find that for every person who dies in the Mediterranean Sea — a story that you have followed — two people will die in the Sahara Desert—a story that you knew little about. You are heartsick to read that since 2014 about 30,000 people have died in the desert.

On Twitter, you see images posted by a few of your friends of some of the 1million Rohingya refugees in their precarious Bangladeshi camps. You read about the monsoon rains devastating the camps and of the perilous situation of the already traumatized people. You see the picture of Ajida Begam, a six-year-old girl who died in Cox’s Bazar when she was crushed by a rain-induced landslide.

You look at an old news story about the tiny country of Nauru in Micronesia, which hosts — is that the right word? — an Australian refugee detention camp. This detention camp or concentration camp holds hundreds of children. A report from 2014 quotes a 16-year-old boy, “People were called by boat ID. People had no value. No guards called me by name. They knew our name, but only called us by boat ID.”A doctor told the human rights investigators about a 13-year-old-boy, detained at the camp in Nauru. He had a “complete loss of hope,”said the doctor, “despair.”The doctor noted that the boy “had no appetite and no will to eat. He lost over 10 kilograms, which would be about a quarter of his body weight.”

You are told by the United Nations that last year the total number of displaced was 68.5 million. That’s the size of the population of Thailand. Some of these people have been displaced for decades. Amongst these people are the Karens of northern Thailand, who are in the Mae La refugee camp in Thailand’s Tak Province. They have been in the camp since 1984. Now, the Karen refugees are joined in this camp by the Rohingya refugees. Karens are not the only ones who have been displaced for at least a generation. The most dramatic case is of the 5 million Palestinians refugees, who pine for a homeland that has been stolen from them. They have lived in exile for generations.

You focus on another number: 16.2 million people freshly displaced in 2017. That’s the size of the population of Senegal. Some of these people are from Senegal. They fled their homeland for Gambia because of political violence. You are surprised to learn that Gambians have fled their country for Senegal. Political violence is only the surface reason. Sixty percent of the Senegalese population live on less than US$3.10 per day. They suffer from poverty as much as gunfire.

These numbers confound you. Each day, the UN says, 44,500 people are displaced. That’s a person being displaced every two seconds. It has taken you 10minutes to write these sentences. In this time,300people have been displaced.

You are thinking of the Honduran girl and of Ajida Begum. You are wondering about the disoriented children as they trek across deserts and mountains, fleeing things that no child (or adult) should see. You are not surprised to learn that more than half the refugees in the world are children. This does not surprise you at all.

You are taken with Marcelo Venegas’s description of the trauma of these children as “soul pain.”Venegas was held in the Villa Grimaldi concentration camp and torture center in Santiago, Chile, after the Western-backed coup against the socialist government of Salvador Allende in 1973. Venegas’s experience was common. It reminds you of the case of the Chilean Communists Bernardo Araya Zuleta and Maria Olga Flores Barraza de Araya. They were taken to one of these Chilean camps set up by the armed forces of General Pinochet. Along with them went three of their grandchildren. The children watched as the grandparents were tortured. Their grandmother went into what was known as “nervous shock.”Venegas is thinking of what this does to a child—the “soul pain”that is forced on the sensitive nature of children.

Yoka Verdoner remembers being sent into hiding in the Netherlands as a young child when the Nazis invaded her country. She thinks of her brother, who almost 80years after these events, writes of them in the present tense. “In the first home, I scream for six weeks. Then I am moved to another family and I stop screaming. I give up. Nothing around me is known to me. All those around me are strangers. I have no past. I have no future. I have no identity. I am nowhere. I am frozen in fear.”He was threeyearsold. He captures the essence of “soul pain”in these words — “I believe that I must have made some terrible mistake to have caused my known world to disappear.”

You cannot get the words of this man — eight decades later — out of your head. You feel that the young Honduran child will say much the same thing decades from now. The young Rohingya child will not say anything. She is dead.

Rich countries do not take in refugees. You find — from the United Nations — that 85 percent of refugees live in countries that are already poor. You know that the numbers of those who are resettled is embarrassingly low. The UN says that it would need to resettle at least 1.4 million people in 2019. But the number of places for resettlement has fallen to merely 75,000 (in 2017). That meansit would take 18 years to resettle these most vulnerable people. That, you know, would only work if there are no more such refugees produced by this unkind world. If you are honest with yourself, you know that resettlement is futile.

What creates this planet of refugees? You know the answer.

This is a partial list. But it can start the conversation. You know that this is not just about Trump and the United States. It is also about Europe and Australia. But also, about arms dealers and corporate greed. You know that. You have to do something about it.