How do we reconcile our fastidiousness in child rearing with knowing that other children are being kept in cages? 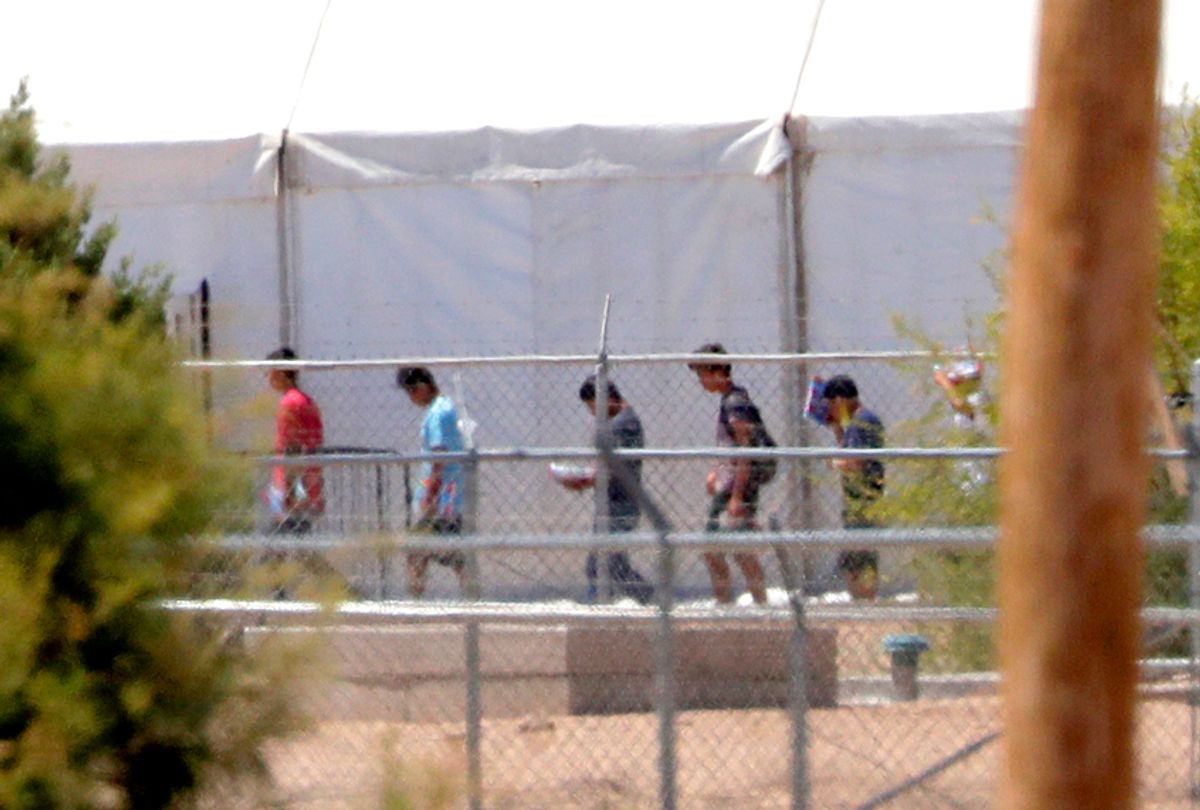 I remember the one time my son, aged two, was pulled from my arms. He screamed. He clung to my hair, the strands twined between his little fingers. He kicked at the arms that held him, which belonged to my mother-in-law, his grandmother. I was being sent to a Thai restaurant for dinner, for a peaceful meal and some grownup time with my husband. My son would spend the next few hours eating his dinner, playing with his toy trains, taking his bedtime bath. He would stop crying a minute after I left the house. He would be with loving and familiar adults.

For the people I know, family separation happens for a few hours, for a day, maybe for a week at a time: teary mothers on the first day of kindergarten, parents who kiss their sleeping children and take the early commuter train to work, moms and dads who send kids off to college and walk quietly, sadly, thankfully, back to their own identities. Reunion is assured at the end of each separation: a running hug at the end of the day, a stuffed animal bought from an airport gift shop, a weekend home from school.

I’m a writer and professor in Berkeley, California. I was born in the United States. I have family nearby. Mine is a world of soft realities, cushioned abundantly with safety nets.

From just beyond my reality, I hear echoes of another: babies pulled from their mothers while nursing, children hysterical with fear, pulled from their parents with no idea if they’ll see them again. I see pictures of  children lying in cages on hard concrete floors, and I think of the organic mattress my husband and I bought for our ten-year-old. I hear about a mother who finds out, too late, that her child was relocated away from her — she’d been told her daughter was being taken for a bath — and I remember my son, three months old, being bathed by his aunts on a visit home. I remember they made fun of me for being excruciatingly gentle with his arms as I took his clothes off. “This is so your first baby,” they laughed. Then I read about the Honduran father who killed himself in his detention cell, and I have no comparison from my own life. I have never felt such fear, such suicidal distress.

These stories and more filter into my world through distant radio voices, tidy online articles. It’s easy to switch them off when they get to be too much. But tragedy carries on when we see the misfortunes of others as separate from our own. I am struck by how easily I, a socially conscious and educated mother, might put extreme care into my own children’s upbringing, but stand quietly by and do nothing for children at the border.

Before Trump signed an executive order ending family separation, the official line stated that no family separation policy actually existed. Rather, zero-tolerance border regulations mandated the criminal prosecution of undocumented adults. Terrified and traumatized children were simply an unfortunate byproduct, the flotsam of border enforcement. Apparently, the public was expected to accept this as a regrettable but inevitable truth. Compounding this regrettable truth is the fact that separated families remain separated, that parents will lose their children in the gulf between family courts and the immigration system.

A year ago, the Texas state senate passed SB 1018, a bill which would allow family detention facilities (“baby prisons,” to some) to license themselves as “childcare centers,” thus freeing them from regulations to which other private prisons are subject. Childcare centers. Here's what federal filings say happened in a Virginia childcare center: Children were beaten with handcuffs on, stripped naked and left shivering in cells. I think back to searching for my son’s daycare. I remember how many other mothers I spoke to, how many visits I made, how many reviews I read. To call a detention center a childcare center is a dystopian misnomer that sends a clear message: The war on immigration will be waged on the bodies and souls of children.

When my son was taken from me before that Thai dinner, he underwent what pediatricians call “positive stress.” When a child experiences an upset — a tantrum, a short separation managed appropriately by sympathetic, familiar adults — that child builds greater emotional resilience. What happens when a child is forcibly taken and kept from his parents? When neither person knows if they’ll see the other again? The resulting reaction is “toxic stress.” A community, a country, an entire generation can be emotionally malformed by the effects of sustained toxic stress.

The parents who live around me think of themselves as people who care about the next generation. We bus within our school district to promote racial and socio-economic integration. We clamor to get our kids into dual-immersion Spanish schools. We celebrate non-traditional family models, LGBT rights and non-binary gender identities. We invest massive amounts of thought and money into the construction of an educated, compassionate and healthy generation. How do we reconcile our fastidiousness with the knowledge of children kept in cages, children ripped from their parents’ arms and housed in sparse and frightening shelters? How do we ignore the thousands of children accumulating an emotional storehouse of toxic stress? Are these kids not members of our children’s generation? Do we tell ourselves that their reality is different from ours, that they should adjust their expectations accordingly?

I try to imagine how it would be to have my child taken from me against his will and mine. I feel it as ripped flesh, a laceration of the heart. I imagine the frenetic thrash of my young son’s arms, the alarm in his eyes, his neck twisting and craning to keep me in sight as he’s carried away.

Still, for parents in my Bay Area enclave, life continues as normal. No part of our own routine demands that we think about families at the border. We buy our organic vegetables, sign our children up for summer camps and swimming lessons. We go to every length to keep them safe, healthy, intellectually optimized. And yes, we love all children. This is something on which my fellow well-meaning parents can agree. But what does that love promise? What are we willing to stand for? What are we willing to do for children who will never go to school with our kids, for mothers we will never meet?

Maybe we skipped birthday parties and family bike rides today, to join one of the marches scheduled around the country. Maybe we put our bodies and voices in places they couldn’t be ignored. Maybe we’ll donate to charities like the Young Center and RAICES. Maybe we’ll call our Congress members.

To be aware of our inaction is perhaps the first step and hopefully not the last. How easy it is for educated middle-class parents to get caught up in the meticulous cultivation of our own children’s futures, to shake our heads sadly at the fates of families at the border, to genuinely grieve for these families and still do nothing. How easy it is, in the end, to do nothing.

On Tuesday, a federal judge in California ordered the administration to stop removing children from their parents and to reunite the currently separated families within 30 days — within two weeks for children under five. But how that will be accomplished remains unclear. As the judge wrote, the government "has no system in place to keep track of, provide effective communication with, and promptly produce" migrant children. It’s in the cloud of the unfathomable that people grow invisible. When we lose count of them, we shut out their voices and faces. But this is not the time to click away. It seems impossible that a parent like me — better versed in lunch-packing than legal advocacy, more chauffeur than activist — could impact the situation at the border, but one thing I’ve learned from parenting is that a step taken, however small, is a mark of progress; that when it feels like I can do nothing, it becomes crucial that I do something.

Shanthi Sekaran is a writer and educator from Berkeley, California. Her recent novel,"Lucky Boy," (Putnam/Penguin), was named an IndieNext Great Read, and an NPR Best Book of 2017. Her writing has also appeared in The New York Times, Canteen Magazine and Huffington Post. She teaches creative writing in the SF Bay Area and has two sons. All author proceeds from July 2018 sales of "Lucky Boy" will be donated to RAICES, a non-profit that provides legal aid to separated immigrant families.