Scientific literacy for the elderly has a host of societal benefits 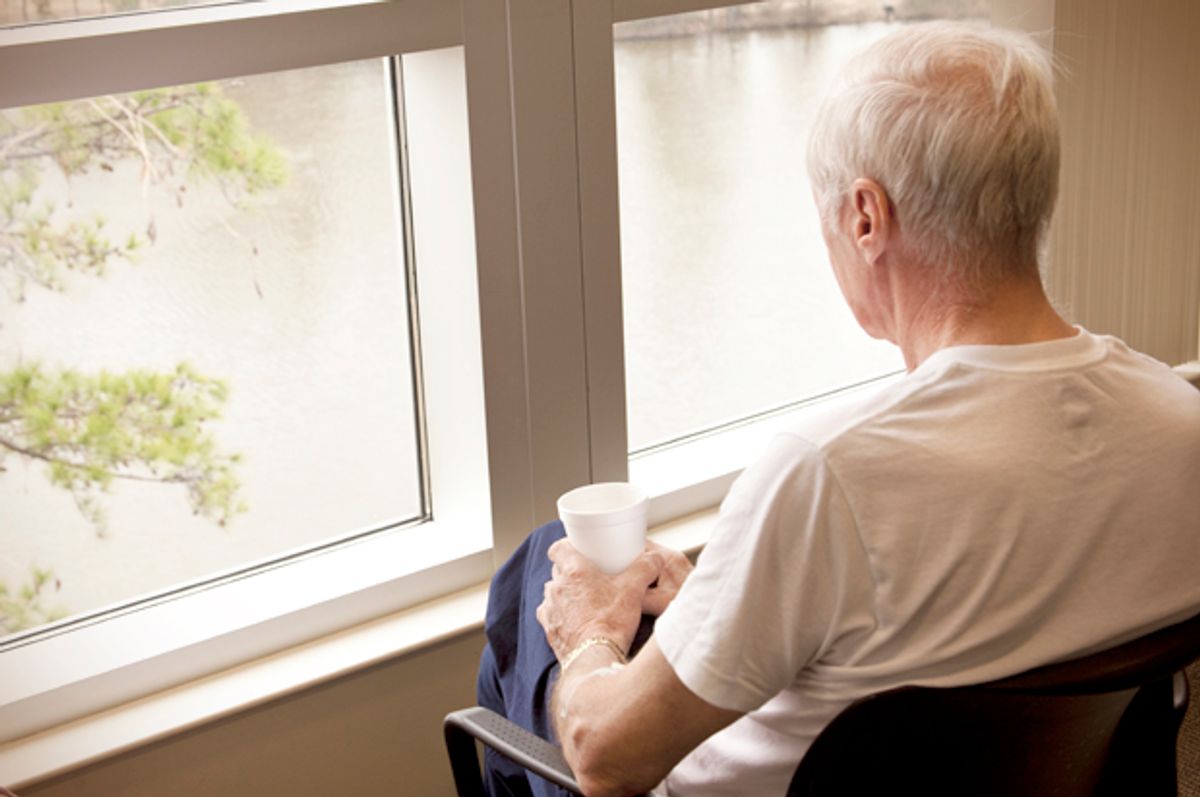 A common scicomm exercise is to instruct scientists to describe something as if we were explaining it to our grandmother. But how often do scientists actually explain science to their grandparents? Or to any senior citizens?

That should change. The global population is aging — it’s expected that over 21 percent of people worldwide will be over the age of 60 by the year 2050 – but this large and growing portion of society is often left out of science outreach. Many STEM (science, technology, engineering, and mathematics) outreach initiatives target K-12 students with the idea that our resources are best spent raising a scientifically literate and innovative next generation.

While it’s certainly vital to instill a passion for science and data in our youths, we should also be devoting resources and effort to teaching our oldest members of society about them.

It’s true that even “healthy” aging is accompanied by physical and chemical changes in the brain. As we grow older, the branching network of neurons in our brains starts to get disrupted, making it harder for our brains’ different regions to talk to each other. Thankfully, our brains are flexible, and, when some pathways get dead-ended, our brains are able to find alternatives, with older brains sometimes recruiting entirely different regions of the brain than younger brains doing the same task. The messages might take longer to reach the right destination, so senior citizens might have difficulty responding quickly, especially when they’re faced with new information and unfamiliar circumstances.

But the “cognitive reserve” theory, supported by mounting evidence, proposes that engaging the brain throughout life strengthens the neuronal network so it can better withstand the effects of age. Even in advanced age, giving our brains a “workout” can still let neurons make new connections — and potentially even add whole new neurons — allowing us to learn new information. And, regardless of cognitive capacity, this learning has demonstrable physical, psychological, and social benefits.

So, while science has backed up what seniors have been showing us for years - that they can (and many want to) learn, resources for teaching older adults have been limited. A common opinion is that money is better spent on educating children who still have a whole lifetime ahead of them. These children might have years to influence policy, but they also have years before they can. Senior citizens, on the other hand, can and do vote - in large numbers.

This voting population shouldn’t be overlooked, especially with the many recent changes in science and environmental policy as well as numerous important science policy issues on the ballots. Whether it’s voting directly on policies such as banning plastic bags or electing officials who will have a say in wider policy decisions, such as how government confronts the opioid epidemic, it is important that citizens have at least a basic understanding of the science behind the issues when they head to the voting center.

Many of the STEM issues up for debate — from CRISPR gene editing to personalized DNA kits, data security to genetic privacy – didn’t even exist during the Greatest Generation’s formative schooling years. Without a proper education about these issues, people are often left deciding how to vote based on how their friends are voting, political ads they’ve seen, or “gut feelings.” But even people with prior beliefs can change their minds when taught the science behind the issues. A recent study, for example, showed that, regardless of their political and religious background, people who understood evolution were more likely to accept it. If we take time to to teach people, they can make better informed decisions at the ballot box.

Another compelling argument for senior science literacy is that it would help mitigate a looming healthcare catastrophe. Our population is aging rapidly in a society that wasn’t built for longevity and is therefore ill-prepared to handle the associated increase in healthcare costs. But many of these costs can be prevented while improving older peoples’ well-being. Senior citizens are often subjected to “polypharmacy” — prescribed many drugs at once, some of which can cross-react or have serious side-effects on their own.

One in 25 older adults are at risk for such negative drug-drug interactions, and many of the drugs involved aren’t even necessary for the patient taking them: almost half of older adults take at least one medication they don’t need. Half of the potential adverse interactions involve non-prescription compounds such as over-the-counter medications and vitamin supplements. “Dietary supplements” are heavily marketed to the elderly with little oversight or educational information provided to the consumers.

Classes in medical literacy could help seniors better understand the science and evidence, or lack thereof, behind the drugs they’re taking, empowering them as patients and helping reduce their medical costs (physical and monetary).

Simply attending such talks can have another benefit — keeping seniors socially engaged. As our neuronal networks shrink, so, all too often, do our social networks. Retirement can lead to social isolation, which has been linked to health problems including heart disease and early death, adding an estimated $6.7 billion a year in Medicare spending. Social networks can help seniors access care, like providing rides to doctors’ appointments, and friends can pick up on potential warning signs of health problems. But it’s not just the physical acts providing the benefits. Simply feeling lonely is a risk factor by itself - people who are lonely have increased risks of functional decline and earlier death, which is part of the reason the UK appointed a “Minister of Loneliness.”

Additionally, there are numerous studies showing that social engagement late in life may delay the onsetof Alzheimer’s disease and other forms of dementia.

Senior citizens are often stereotyped as technologically adverse or worse, incompetent, but research from the Pew Institute shows that more and more seniors are taking up technology and, when they do, they’re becoming highly active users. This expanding technology use can help senior citizens remain engaged in their communities and advance science in the process. Instead of retirement leading to social isolation, the ample free time that comes with it can be used to make valuable contributions to research by doing citizen science.There are many existing citizen science projects that seniors can get involved in, many of which they can even do from home. These include everything from analyzing images of distant planets for NASAto grassroots efforts to collect and process information on local air and water quality.

Local senior and community centers and organizations should actively advertise opportunities as well as keep lists of projects on-hand to give out to anyone interested. Libraries can also play a large role - many citizen science projects are web-based, and libraries often provide free computer access, giving seniors without computer access at home an opportunity to engage whenever they want in a communal environment.

Even seniors with age-related cognitive impairments could participate. Take, for example, my grandma. She has dementia and doesn’t remember that I’m in graduate school, let alone what I’m studying. But when I call her twice a week, I make to her I make sure to bring up that I’m studying biochemistry. Why? Whenever she hears the word “chemistry” she lights up and tells me that she loves chemistry (though she can’t remember why), then her voice falls slightly as she says she only got to take one class. One single class was enough to remain stuck when so much else has been lost.

Citizen science programs can be designed specifically for people with cognitive decline like my grandma to work closely with their caretakers. For example, maybe the senior can help keep a lookout for birds and the caretaker can record the information and provide it to researchers studying migration patterns. Scientists could even collaborate with nursing home facilities to develop infrastructure for such projects and provide periodic guidance. Similar “cognitive stimulation” has been shown to slow down cognitive decline, even in people with mild to moderate dementia. So rather than placing additional burden on caretakers, engaging in this “extracurricular” work would pay off in the long run.

All these personal and societal benefits wouldn’t be complicated or pricey to put into place. But they would be fun. Senior centers could host “science nights” where members could hear talks about topics they’re interested in. In addition to being an enriching form of social engagement for the seniors, teaching to senior citizens could be a great way for scientists to practice their science communication skills. (Speakers don’t even need to be there in-person; recent advances in technology can make it easier than ever to virtually connect scientists with people around the globe, as evidenced by the success of the “Skype a Scientist” program, though it mainly connects scientists with classrooms.)

The fascination invoked by watching a spider spin a web or seeing our hair stand up when we rub a balloon against our head is frequently described as “childish wonder,” but there is nothing childish about the awe that science can evoke. There’s nothing childish about turning on that lightbulb in my grandma’s brain. Whether we’re 9 or 90, science can excite us, connect us, inspire us, and benefit us. We just need to give it the chance to do so.