Illegal sports wagering had been an industry worth about $150 billion a year, which we now have access to 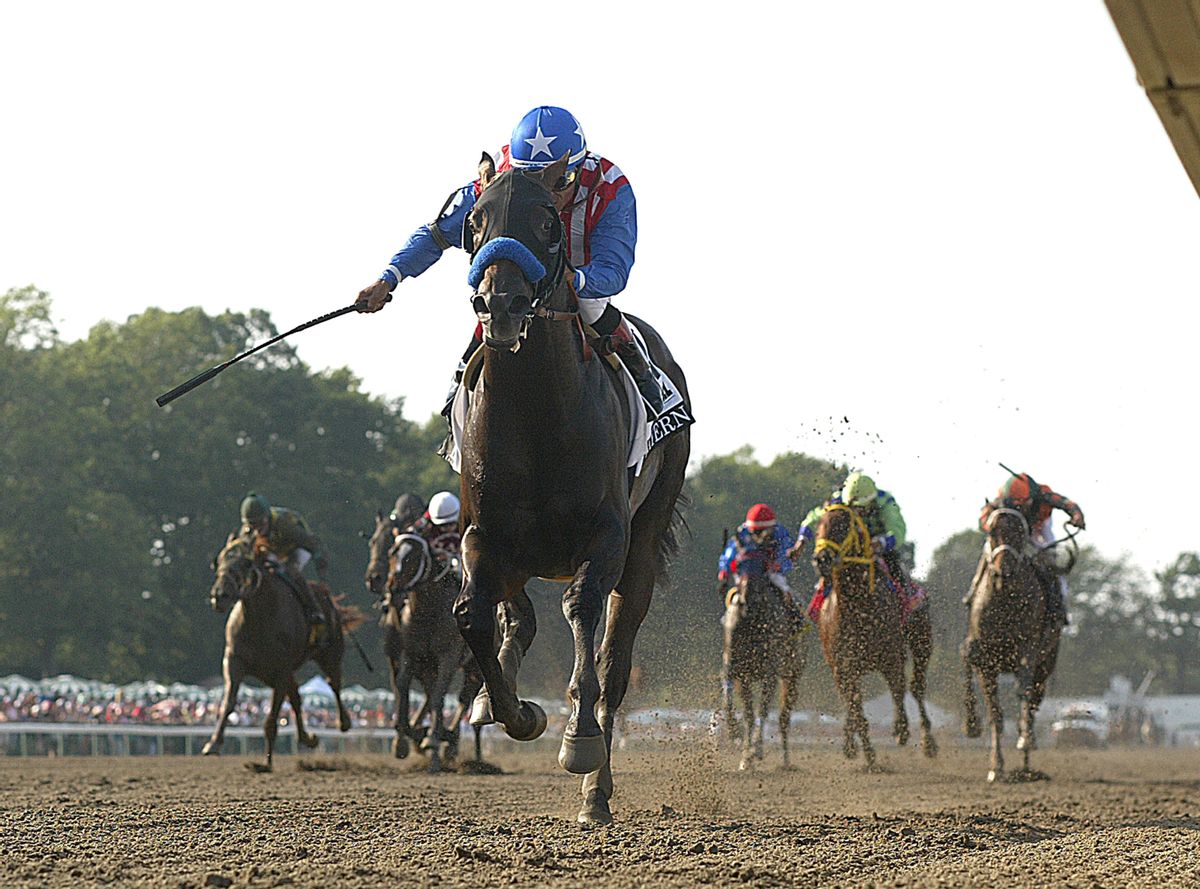 In a photo provided by Equi-Photo, Bayern, with Martin Garcia riding, wins the $1 million Haskell Invitational horse race at Monmouth Park on Sunday, July 27, 2014, in Oceanport, N.J. Monmouth Park Racetrack is hoping sports gambling will save itself from the slow extinction facing much of the horse racing industry _ a wager that could have a big payoff if New Jersey can successfully fend off the opposition of the Justice Department, the four major pro sports leagues and the NCAA. (AP Photo/Equi-Photo, Bill Denver) (AP)
--

Widespread, legalized sports gambling could change the way you watch your favorite sport.

It could also soon change how the media cover sports.

Since the Supreme Court in May gave states the option to allow sports betting, it seemed like a vast, untapped well of revenue had been opened. Until then, illegal sports wagering had been an industry worth about US$150 billion a year.

Since the May ruling, Delaware and New Jersey have each implemented sports gambling, with Rhode Island, West Virginia and Mississippi not far behind. All of these states will be able to tax betting. Their casinos will be able to open sports books to lure customers. And leagues are lobbying for a cut of each wager, though that hasn’t yet come to pass.

Lost in all this has been the question of how the sports media will respond.

When I was a reporter and editor for The Associated Press, I saw first-hand how traditional media outlets were slow to adapt to the internet, much to their detriment. Now, with sports gambling, editors and reporters will ideally adjust appropriately, attracting more readers and subscribers by providing information that’s useful to bettors. A potentially disastrous outcome would be if already cash-strapped media outlets are reluctant to change, and are slow to meet readers’ needs.

A new lens of analysis

“To not acknowledge sports betting would be to do a disservice to your audience,” Barry Bedlan, director of sports products for the AP said in an interview for this piece.

Bedlan had spoken hours earlier at a panel on sports betting at the annual convention of the Associated Press Sports Editors, the body of the nation’s print and digital sports editors.

Bedlan predicted that, in a few years, major papers and websites in states with legalized betting will have a position in the sports department in which a reporter writes exclusively from a bettor’s perspective. Reporters on a team’s beat, meanwhile, may start to inject gambling into routine coverage – noting the impact of a star player’s injury on the betting line, for instance, or saying whether a winning team covered the point spread in a game recap.

The Associated Press highly values its credibility and strict adherence to journalistic ethics. The news agency has long provided point spreads – the number of points teams are expected to win or lose by – to its clients. But expect its offerings to expand.

“Straight predictions and picks should gain renewed importance – Team A will beat Team B, and here, quickly, is why, according to our experts,” Jeff Rosen, assistant managing editor for sports of The Kansas City Star, wrote to me in an email.

Even weather reports could become more important: For example, if snow is expected on a Sunday in Philadelphia during an Eagles home game, it will likely reduce the points that are scored. This bit of information would certainly interest gamblers wagering on the over/under, a bet on the total points scored in a game.

How much of an appetite is out there?

The big question many in sports media face now is how deeply – and how soon – to cover betting.

Some of that, of course, depends on whether sports betting is legal in the state where the outlet is located. But out there for all to see is the success of the Vegas Stats & Information Network, a multiplatform gambling news outlet that launched in 2017 and enticed renowned broadcaster Brent Musberger away from ESPN to be its face.

It has a Sirius channel, podcasts, live streams and a growing following that some media executives have surely noticed.

That doesn’t mean everyone is pouring their resources into sports gambling. Some are taking a wait-and-see approach.

Kevin Manahan, sports director at NJ Advance Media, told me that a key question is whether bettors who have been making illegal bets will want more information now that the activity has been legalized, or whether they’ve already been getting what they need.

“We just don’t know what the audience is going to be,” Manahan said. NJ.com closely tracks what works with readers, so if there’s an appetite for gambling analysis, it will respond appropriately.

Bill King, who covers the gambling issue for the Sports Business Journal, agrees that the big question is how much the gambling market will grow.

“What we’re really talking about is taking an illegal business and making it legal,” he said.

Does that mean new people will bet? There could be a huge swath of people who think it would be fun to lay down a $10 sports bet on a weekend, but had been turned off by the sketchiness of signing up for an illegal offshore account.

King also notes that the media in regions where betting has been legalized could benefit from advertising buys from bookmakers. Opening a betting account is more complicated than, say, signing up for a social media account. Many people will likely only have one or two betting accounts, which could lead to intense competition among bookmakers.

Bill Bradley, an editor at the Las Vegas Review-Journal, believes sports gambling can be a big draw for newspapers and their websites.

When he became assistant managing editor for sports in 2015, Bradley took a reporter who was covering sports betting part time and made that his full-time job.

The results were dramatic. The betting stories and videos were consistently among the sports section’s top draws, and betting now has its own section on the paper’s website. Even simple stories, like Sunday’s NFL lines and injury reports, have become more popular when reported and analyzed with the bettor’s perspective in mind.

In fact, the work of the reporter on the betting beat was so well-received that he wound up getting hired away – by the Vegas Sports Information Network.

Certainly, in terms of journalistic ethics, offering reporting and analysis for betting demands some new rules in the newsroom, editors said. For reporters, that includes not betting on the team you cover or even the sport you cover.

And Mark Conrad, an associate professor at Fordham University and author of the popular textbook “The Business of Sports: Off the Field, in the Office, on the News,” cautioned that, amid the novelty of legal sports betting, the media also need to cover issues such as gambling addiction.

But a cultural change is afoot.

Bradley and Bedlan noted that many editors at the APSE meeting had, in the past, never bothered to learn even basic sports gambling terms such as “parlay” or “bad beat” because betting was illegal and perhaps not true to the spirit of sports.