Roe v. Wade is likely dead: What can states do to protect women?

Yes, Roe may well be overturned. But blue states can and will pass laws protecting a woman's right to choose 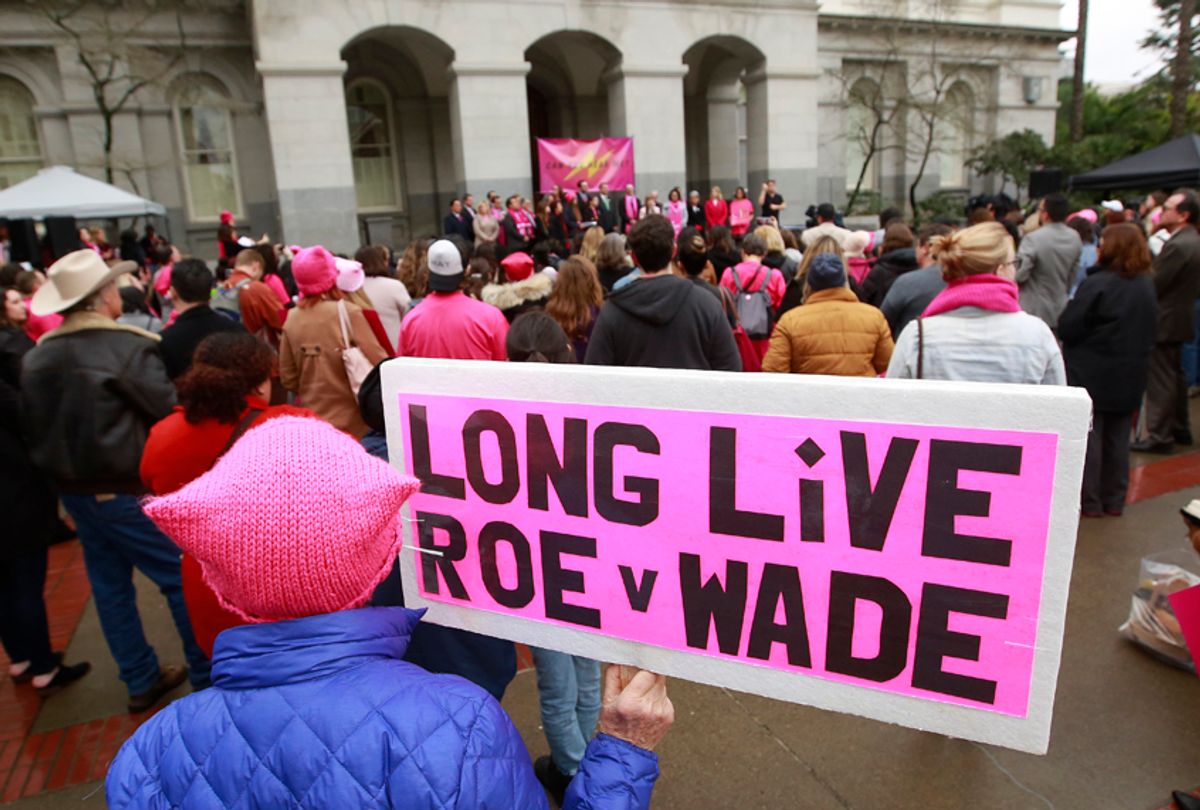 Justice Anthony Kennedy was, in most respects, a hardline right winger who should mostly be remembered for the role he played in dismantling American democracy. He was also, however reluctantly, the last bulwark against Donald Trump fulfilling his campaign promise to overturn Roe v. Wade by appointing judges hand-fed to him by the Federalist Society.

With Kennedy leaving the Supreme Court, and with Senate Majority Leader Mitch McConnell unrestrained by morality or due process, it's likely that Kennedy's seat will soon be occupied by a right-wing fanatic who watches "The Handmaid's Tale" for inspiration. Various efforts to ban abortion are already in the court pipeline. As Jeffrey Toobin recently said on CNN, the day is likely coming soon when abortion is once again illegal in many states.

Because of that, it's time for people who support abortion rights to start getting creative about protecting as many women's rights as possible. It appears nearly inevitable either that the 1973 Roe decision is overturned completely or modified in such a way that states can regulate legal abortion out of existence.

“A complete reversal of Roe potentially means that states not only have an opportunity but, I’d argue, a duty to do everything they can to protect abortion’s legal status," said Kelly Baden, director of reproductive rights at State Innovation Exchange (SiX) Furthermore, she said, states where abortion remains legal will need "to improve service provision . . . in order to accommodate what we would expect to see, which is lots of people having to cross state lines and access abortion care in other states."

SiX works with legislators to create policies to advance progressive policies on the state level. As Baden explained, there's a lot of space for states, at least those with Democratic leadership, to move quickly to protect women's rights. Overturning Roe, after all, merely means that the issue is returned to the states to decide — and individual states are clearly free to enshrine abortion rights into law.

According to the What If Roe Fell website created by the Center for Reproductive Rights, 23 states are at high risk of banning abortion if Roe is overturned, while there are 19 where it would likely stand. Eight states and the District of Columbia fall into the maybe zone.

In some states, both where abortion rights seem secure and those where they're more wobbly, legislators have been quietly trying to pass laws that would protect abortion rights in the event of a Roe overturn. One of those states is Rhode Island, which has a pre-Roe ban on abortion on the books. Activists gathered at the state house in Providence on Thursday night, demanding that a special session be called to pass the Reproductive Health Care Act, which would replace the pre-Roe law with a law making abortion legal statewide.

“This in an emergency," state Rep. Aaron Regunberg, now a Democratic candidate lieutenant governor, told Salon. "Women across the state, advocates at the state house, have been discussing this constantly, begging state leadership to take this step seriously and to pass legislation that we’ve introduced to codify the protections of Roe v. Wade."

That bill has been killed without a floor vote for the last two years in Rhode Island, and Democratic house speaker, Nicholas Mattiello, has argued that the issue is too "divisive" to deal with, especially considering the court protections for abortion. Regunberg rejects that argument.

"We’ve been saying an emergency, and now it’s never been more clear that this is an emergency," he said, adding that "a state like Rhode Island, which is 'triple blue'" -- meaning that both houses of the state legislature and the governor's office are controlled by Democrats -- can't "utterly fail its women" by not passing this law. Regunberg promises that even if no special session called can get this done, the bill's advocates are gunning for a fight when the legislature reconvenes in 2019.

A similar bill has been languishing in the New York legislature, stymied by the one-seat Republican majority in the state Senate. But Democratic candidates are seizing on the issue, well aware that New York is a pro-choice state and that abortion rights are broadly popular with the public.

“If I were running for office, it’s something I would be talking about, for sure," Baden said, with a laugh. “It’s politically wise. Women have been leading this resistance.”

Baden adds that, come 2019, "We expect a new crop of state legislators to be taking office in January, many of whom are coming out of this resistance moment." Those folks, she argued, will have "some wind at their back to be able to take bolder and braver political moves," especially when it comes to protecting abortion rights.

This will matter not just for the women who live in blue states but for women across the country. If conservative states start to ban abortion, there will be a tide of women crossing state lines or even flying across the country to get abortions. To accommodate this surge, it may not be enough for states to codify the legal protections that currently exist with Roe. Instead, more liberal states may need to explore policies that make it easier for abortion providers to meet a greatly increased demand.

California, for example, passed a law in 2013 allowing nurse practitioners, certified nurse-midwives and physicians' assistants to be trained as abortion providers. States could also make it easier for doctors to offer "telemedicine," abortions by consulting with a woman by video conference and then mailing her abortion pills to take at home, a method which has proven safe. (There are serious legal questions, however, about providing this service to a woman living in a state where abortion is illegal.)

Another future possibility may lie with pharmacies. At present, pharmacies are restricted by the FDA from directly offering abortion pills to patients, but the ACLU is currently suing to change that, arguing that the pills are safe and that regulations forcing patients to obtain them directly from a doctor are too onerous. If the FDA can be convinced or compelled to change that regulation, states could pass laws making it possible for women to get abortion medication directly from pharmacies, reducing time and resource demands on clinics.

Either way, the end of Kennedy's tenure on the court makes it a moral imperative for state governments to stop ignoring the issue.

“It’s staggering and painful, but we have to be saying 'when,' not 'if' Roe will be overturned, Regunberg said. "Time’s been up for a while, but now time is really, really up.”