As consumers pledged they would no longer shop at the retailer, the hashtag #BoycottWalmart became a trending topic 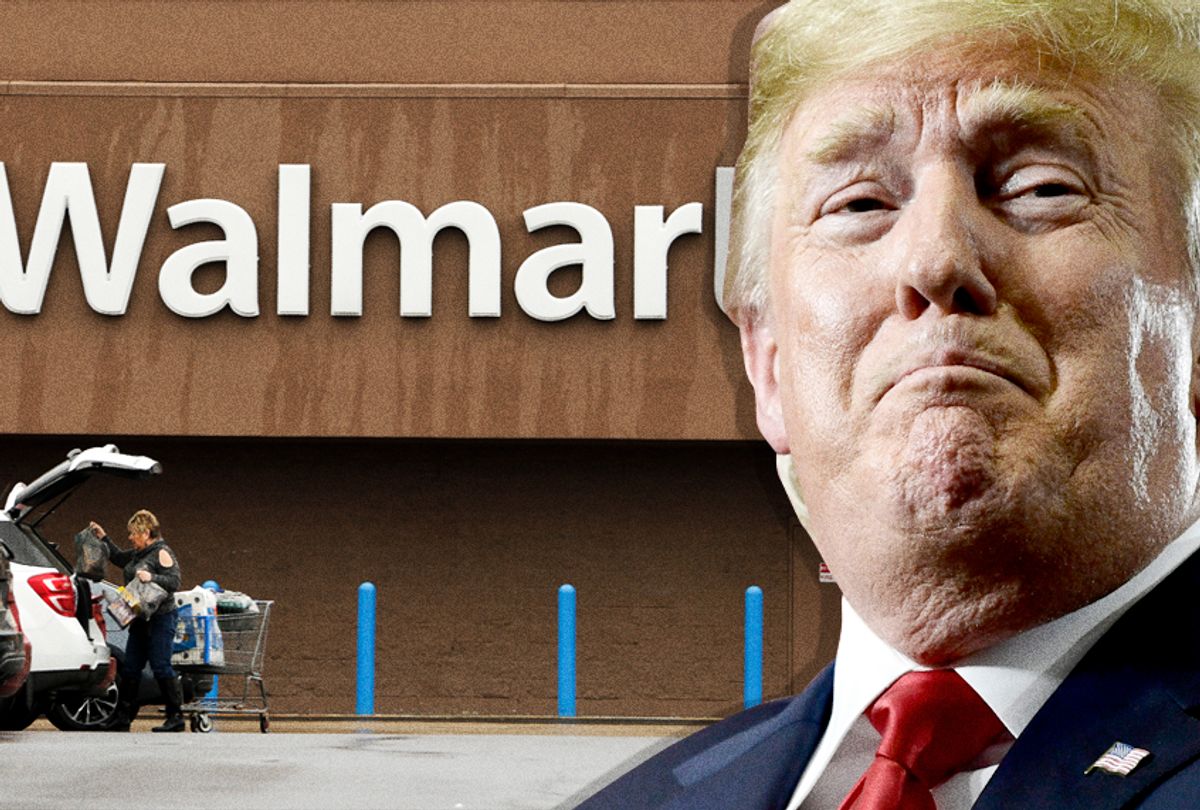 Walmart yanked T-shirts and baby onesies carrying the message "Impeach 45" from its website after the apparel ignited calls for a boycott from backers of President Donald Trump.

The retail confirmed the move in response to a tweet from conservative commentator Ryan Fournier, who called out Walmart befhore his more than 500,000 followers on Twitter.

"Walmart why are you selling Impeach 45 baby clothes on your website????? What kind of message are you trying to send?" Fournier tweeted on Monday evening.

Fournier's questions sparked backlash among fellow Trump supporters, who were offended that Walmart would sell such items. As conservative consumers pledged they would no longer shop at the retailer, the hashtag #BoycottWalmart became a trending topic Tuesday on Twitter. Among them, conservative media personalities Diamond and Silk weighed in by tweeting a GIF that read, "Oh hell naw."

Walmart addressed the controversy in less than 24 hours.

"These items were sold by third-party sellers on our open marketplace and were not offered directly by Walmart," the retailer said on Twitter. "We're removing these types of items pending review of our marketplace policies."

The third party in question was the Connecticut-based retailer Old Glory, who addressed the impending firestorm in an interview with Bloomberg.

“We carry over 10,000 politically inspired T-shirts dealing with all aspects of politics, from liberal to conservative thought,” Glenn Morelli, president of Old Glory, said to the outlet. “We are an American company, and we are proud to be American. And this is what we do: We sell T-shirts for a living.”

CNN confirms that the pro-impeachment apparel was removed from Walmart's site by Wednesday morning — yet a wide variety of merchandise that pushes political slogans like "Hillary for president," "Stop Hillary" and "I'm one of 65,844,610 Americans against Trump" remains available for purchase.

Both the Trump T-shirt and its onesie version remain on sale on Amazon, where they can easily be located by searching for the keywords "Impeach 45." The Washington Post reports that the T-shirt is also available from other digital retailers, including Bonanza.

Political-themed apparel has courted controversy for Walmart in recent years. After receiving a complaint from the Fraternal Order of Police in 2016, the retailer yanked T-shirts and hoodies that said "Bulletproof. Black Lives Matter."

Another shirt, which suggested journalists should be lynched with the words "Rope. Tree. Journalist. SOME ASSEMBLY REQUIRED" emblazoned across it, was pulled by Walmart at the urging of the Radio Television Digital News Association. "A shirt with the same sentiment had been spotted at a rally during the presidential campaign," CBS News reported.

As with this week's controversy, both of those items were available for purchase on Walmart's website via third-party vendors.

Businesses face stricter scrutiny when they dip their feet into politics, after the 2016 election left an increasingly polarized country in its wake. The Washington Post elaborates:

Tuesday’s call for a Walmart boycott is the latest example of the pressures businesses can face as the nation’s political divide deepens and social media has made it easier to marshal others on a cause. Last February, some Trump supporters vowed to take their money elsewhere after Nordstrom dropped Ivanka Trump’s clothing line; other groups have gone after Breitbart and Laura Ingraham‘s advertisers while United Airlines, Best Western, MetLife and other companies cut ties with the National Rifle Association. The impact of these boycotts are often unclear.

But one tweet from a top Trump surrogate suggests the calls for a boycott against Walmart may soon draw to a close. Brad Parscale, the campaign manager of Trump's 2020 re-election campaign, tweeted his support for the retail giant, declaring there is "no need to boycott."

"Walmart has assured me that the merchandise will be down as soon as possible. It was not deliberate," Parscale wrote on Twitter. "Thank you Walmart for doing the right thing!"