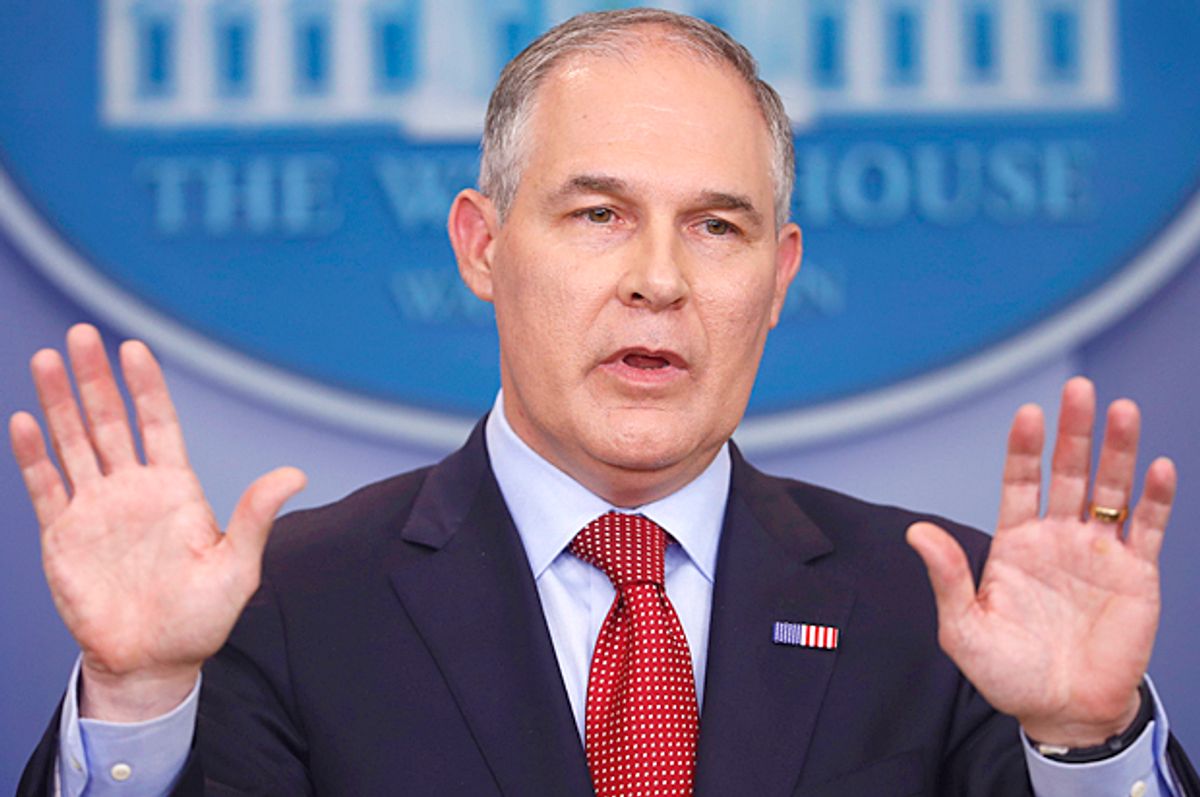 Environmental Protection Agency Administrator Scott Pruitt, who announced yesterday that he is resigning, leaves a legacy of suppressing the role of science at the agency.

Blocking science in the name of transparency

In March, Pruitt proposed a new “science transparency policy.” Under the proposed rule, when the EPA designs pollution standards and rules, it would use only studies in which the underlying data is public. Pruitt said his policy would prevent the EPA from using “secret science” that cannot be tested by other researchers. But scientists say important findings could be excluded.

One example is research by Harvard University that linked fine particle pollution in U.S. cities with an increase in deaths from lung and heart diseases. The data for the 1993 study was key to the EPA’s setting of health standards that regulate air pollution. But the study’s underlying data is not public because researchers promised confidentiality to their subjects, 8,000 adults and 14,000 children in six cities.

Pruitt fired Science Advisory Board members who receive EPA grants for their research, saying they cannot remain objective if they accept agency money. In replacing them, Pruitt transformed the board from a panel of the nation’s top environmental experts to one dominated by industry-funded scientists and state government officials who have fought federal regulations.

Pruitt removed 21 members of the advisory board, mostly academics, and replaced them with 16 experts with ties to industries regulated by the agency and two with no industry ties. Fourteen of the new members consulted or worked for the fossil fuel or chemical industries, which gave Pruitt nearly $320,000 for his campaigns in Oklahoma as a state senator and attorney general. Eleven new members of the EPA’s board have a history of downplaying the health risks of secondhand smoke, air pollution and other hazards, including two who have spun science for tobacco companies, according to an investigation by Reveal from The Center for Investigative Reporting.

Pruitt repeatedly cast doubt on the scientific consensus that human activities are the primary cause of climate change. For instance, in a 2017 interview on CNBC’s “Squawk Box,” Pruitt said: “I think that measuring with precision human activity on the climate is something very challenging to do, and there’s tremendous disagreement about the degree of impact, so no, I would not agree that it’s (carbon dioxide) a primary contributor to the global warming that we see.”

This contradicts the overwhelming science that people are causing climate change.

The Intergovernmental Panel on Climate Change in its 2013 summary for policymakers found that it is “extremely likely that more than half of the observed increase in global average surface temperature from 1951 to 2010 was caused by the anthropogenic increase in greenhouse gas concentrations,” or human activity. By “extremely likely,” the group of international scientists means a probability of 95 to 100 percent.

Pruitt took steps toward repealing Obama-era protections for waterways and wetlands to fulfill a Trump executive order to roll back the reach of the Clean Water Act. That rollback would strip federal protection from seasonal streambeds, isolated pools and other transitory wetlands, exposing them to damage, pollution or destruction from housing developments, energy companies and farms.

In June, Pruitt sent his proposal to redefine which waters are protected to the Office of Management and Budget, which is the final step before it is made public. Trump had ordered Pruitt to incorporate a definition put forth by late Supreme Court Justice Antonin Scalia, which defines protected waters as relatively permanent and continuously connected by surface water to navigable bays, rivers or lakes. If that definition is incorporated, it could allow damage to waterways that provide drinking water for more than 117 million Americans.

Pruitt’s hostility toward science fueled a brain drain at the EPA. The New York Times reported that out of 700 employees who left the agency in 2017, more than 200, or 27 percent, were scientists.

Among those leaving were 34 biologists and microbiologists, 19 chemists, 81 environmental engineers and environmental scientists, and more than a dozen toxicologists, life scientists and geologists. Few of these scientists have been replaced. According to the report, seven of the 129 people hired by the agency in 2017 were scientists.

Pruitt proposed deep cuts in the EPA’s budget that could slow the cleanup of the Navajo Nation’s uranium mines. So far, Congress has resisted much of the cuts. But Pruitt kept proposing them. For instance, the $2.9 billion he proposed in state and tribal assistance grants for fiscal 2019 would provide $574 million less than the current budget.

Navajo Nation President Russell Begaye worries that such cuts could derail the EPA’s efforts to identify the companies responsible for cleaning up old mines and supervise the projects.