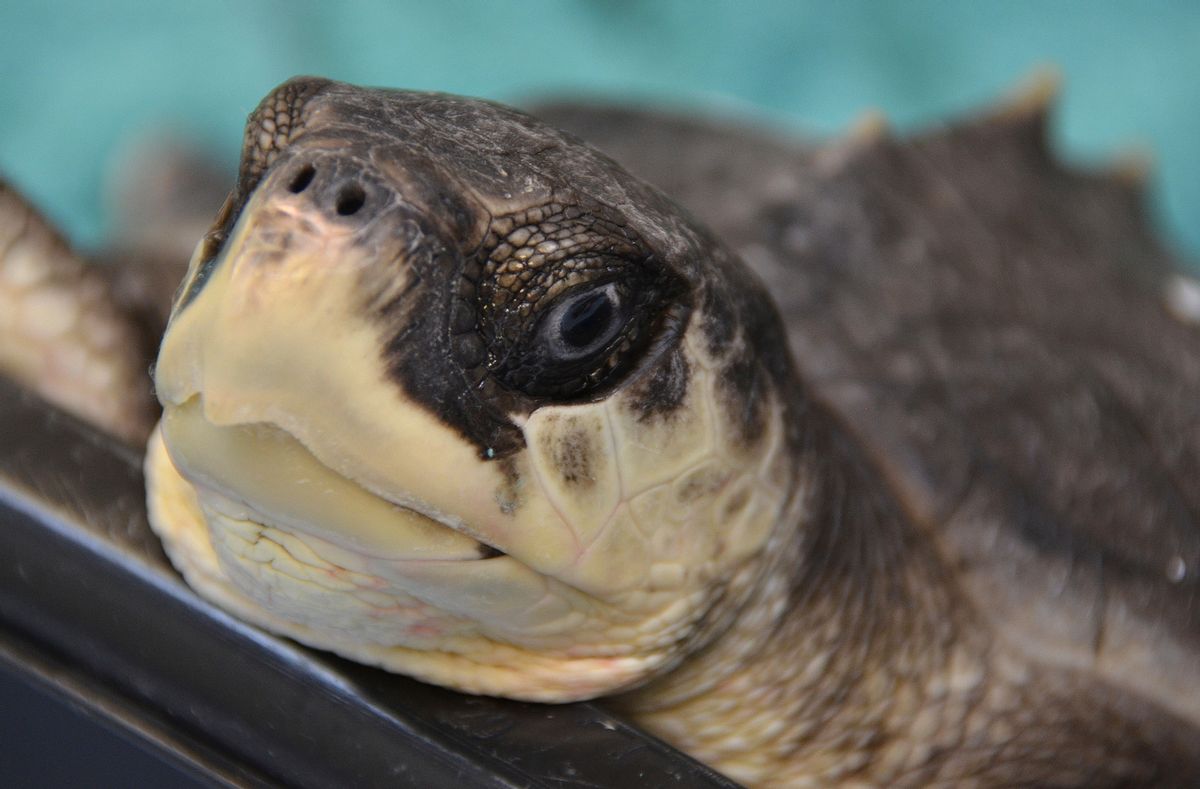 Wallace Nichols, a marine biologist who has been studying sea turtles and plastic pollution in the oceans for nearly 25 years, is worried.

“It used to be that when we found a rare piece of plastic on a nesting beach or tangled around a turtle, we’d pick it up or remove it and all would be right in the world again,” he told Truthout. “But the problem steadily and steeply worsened to the point that now we can spend all day endeavoring to clean up the plastic in and on the same beaches, come back the next day and start all over again. Nearly all turtle necropsies produce internal plastics.”

Nichols, who is also a senior fellow at the Center for the Blue Economy and author of "Blue Mind," says he used to try to estimate how many sea turtles were impacted by plastic pollution, but now the answer to him is simple: “All of them, 100 percent,” he said. “But that number should be ‘none of them,’ zero percent.”

Nichols believes sea turtles have become the poster species for what he calls the “runaway carbon economy.”

“We’re talking about animals that spend much of their lives in the wildest, most distant and uninhabited parts of the ocean, yet they still ingest and swim through plastic out there,” he said. “Then nesting beaches and even the sex ratios of baby sea turtles are impacted by climate change, and their feeding and nursery areas are being transformed. That’s a big wake-up call.”

But that is just the tip of the iceberg of other issues besetting Earth’s oceans, and all of them are cause for Nichols’s wake-up call.

Nichols believes, as he put it, “Our mismanagement of the carbon economy during the past century has put the ‘blue economy’ — one based on water and far more important to life on Earth — at risk.”

By “blue economy,” he is referencing a widely used term for the economic contribution of the oceans and coasts to the overall global economy, along with the imperative that humans address the sustainability of the oceans.

Nichols said that, taken together, human-caused climate disruption, plastic pollution, oil and fuel spills and leaks, and industrial agriculture have significantly altered life on our planet.

“Our lakes, rivers and oceans are downstream of all of these impacts,” he said. “The results are ocean warming and acidification, sea level rise, dead zones, beach closures, a biodiversity crisis, fisheries collapses, and of course, massive amounts of plastic pollution in places it should never be — such as the guts of sea turtles, birds and whales and mixed into beach sand, sea salt and food.”

Jeffrey Seminoff is the leader of the National Oceanic and Atmospheric Association’s Marine Turtle Ecology and Assessment Program with the National Marine Fisheries Service.

He agrees with Nichols that marine debris like plastics are a huge problem, but added that microplastics are equally bad, given that they suppress immune systems of the marine life that ingests them, as well as causing physiological distress to wildlife. Seminoff also points to ocean acidification as another of his biggest concerns, along with, of course, anthropogenic climate disruption’s impact on the oceans.

However, to underscore his point on plastics, as well as Nichols’s concerns, Seminoff told Truthout that the day before we spoke, he had conducted a sea turtle necropsy.

“I’m training the Dutch deployment team that, this August, is going to work cleaning up the Great Pacific Garbage Patch,” Seminoff said. “One of the green sea turtles we just necropsied was literally loaded from throat to anus with plastic. I’ve never seen so much plastic in an animal before.”

The Great Pacific Garbage Patch is the largest accumulation of ocean plastic in the world, located between Hawaii and California. Recent estimates show that in the Great Pacific Garbage Patch alone (and there are at least four other massive oceanic garbage patches around the world), there are more than 1.8 trillion pieces of plastic, weighing an estimated 88,000 tons. That is the equivalent of 500 jumbo jets and includes a plastic count that is equivalent to 250 pieces of debris for every single human on Earth.

According to Seminoff, turtles are a close second to seabirds as the marine life most affected by plastic pollution, because any plastic they encounter they perceive as prey and eat it. Because of this, he said, “The ingestion component is particularly detrimental.”

Seminoff explained that while sea turtles are incredibly resilient animals, this also means that when we see impacts on them from all of these issues, “Once they start to suffer, as resilient as they are, it is a clear indicator of poor health of our ocean ecosystems.”

“Why do we want them to survive?” he asked. “Because if they don’t, other things simply won’t.”

When he lectures about sea turtles or marine mammals, he frames things in the ecological roles of these animals.

“It’s profound, in that they are keeping ecosystems in balance, and are playing [the role of] keystone species,” Seminoff said. “If you don’t have sea turtles in these coastal ecosystems, the ecosystems suffer, because [sea turtles] are incredibly important for the entire system to function in a healthy manner.”

Meanwhile, Jason Scorse, chair of the International Environmental Policy Program at the Middlebury Institute of International Studies at Monterey, where he is also the director of the Center for the Blue Economy, believes the two greatest threats to ocean ecosystems are acidification and commercial fishing.

“Acidification is undermining the entire ecological system, because if the pH gets low enough and these shelled and calcified creatures start dying off in large numbers, that sets in motion a huge cascade effect across the entire ocean system,” Scorse told Truthout. “This is the greatest concern of the scientists I know.”

Each of these experts has dire predictions of what will happen to the oceans (and humans) if the aforementioned crises continue along their current trajectory unchecked.

Nichols noted that he and his colleagues’ efforts to save sea turtles around the world have been quite successful.

“Thousands of organizations and legions of conservationists who care deeply have worked tirelessly to save sea turtles,” he said. “It gives me a lot of hope. But these larger existential issues are next level and will require our blue movement to step things up.”

About “these larger existential issues,” Nichols was frank.

“Rather than making predictions of what might come, it’s really about what’s happening already. Our predictions from 25 years ago are here, now. While we continue to work on solving the problems and fixing what’s broken, we are also adjusting to this new planet.” Nichols warned that he expects us to lose more life in the oceans, but believes we are obliged to continue to work, individually and collectively, toward a more sustainable economy.

Seminoff was stark in his assessment of what is to come without dramatic and immediate changes. “I see a complete dismantling of any ecosystem structure,” he said.

Seminoff used sea turtles to underscore his point. Given that they are a species whose sex is determined by temperature, feminization is a huge issue that is going to get even bigger.

“If sea turtles are having more and more females, populations are going to crash . . . they can’t be sustained with only one sex,” he said. “So that removes an important coastal ecosystem role they play [and] then they are no longer a keystone species keeping other species in check . . . like sponges overrunning reefs in the Caribbean, or sea grasses running out of control in the Pacific coast.”

“We lose them, the whole ecosystem function associated with nesting colonies crashes,” he said. “So, one by one, those structures start to erode away, and these are just a couple of examples.”

Seminoff pointed out how when one crisis impacts a species and we lose that species, unforeseen consequences of this could come back to haunt us.

“Take acidification, or the marine heat waves: You limit habitat of offshore species, really nuanced things like changes in abundance of sea jellies impacts leatherback turtles, then you have a trickle-down effect from there,” he said. “So, the issue is extremely multifaceted. Take any of these single issues and there will be a cascading effect in many unforeseen ways.”

Scorse was even more blunt. “It’s the Sixth Mass Extinction, and that is not debatable . . . it is simple math,” he said. “It’s not opinion.”

Five of the G7 nations recently agreed to an ocean plastics charter. The two countries that did not agree were Japan and the United States.

The charter proposed a lifecycle management approach toward plastics in the global economy, which includes making all plastics recyclable by 2030, among other issues.

However, the charter is non-binding.

Seminoff thinks we need to look seriously at offsetting carbon emissions, but admits this is a challenging goal to address internationally.

“Promoting sustainable fisheries and controlling the commercial fisheries is key,” he added. “At the individual level, the number of people we can enlist in helping with our own personal decisions as consumers can be a goal. Additionally, not using plastic and Styrofoam, and knowing where your fish come from, are helpful — along with remembering the importance of our individual actions.”

Scorse believes making a transition of our global food supply to being plant-based rather than animal-based is equal to or even more important than transitioning away from fossil fuels.

“Obviously, the move away from the fossil fuels is the key challenge to our times, but along with that is a move away from an animal-based food economy,” he said. “Even with Trump … these trends are not going to be stopped because they are grassroots movements and the economics is almost all going in one direction.”

Scorse believes that anyone keen to reduce their carbon footprint should understand that transitioning to a plant-based diet is the most impactful thing to do.

“From generating waste to ethics to [ocean] dead zones,” he said, “the best thing to do is to move to plant-based diets.”

As for Nichols, he believes that many, if not most, of the material solutions we need to fix these problems are already “on the shelves” right now.

“Governments can incentivize the transition, and at the very least, stop subsidizing outdated, destructive activities [like the oil industry],” he said. “In many parts of the world, we’d be smart to significantly back up from the water and create public ‘blue spaces.’ This will give more people access to the vast ‘blue mind’ public health benefits we get from spending time together by the water but mitigate costly losses that come with rising waters and flooding.”

In this way, Nichols sees the necessity of humans turning to the oceans for wisdom and solutions as key to the future.

“It turns out, sharing access to these water-based cognitive, emotional, psychological, social, physical and spiritual benefits is good for the blue economy,” he said. “We’ll all need that to maintain our mental health and creativity on a hotter, more anxious planet.”

Dahr Jamail, an independent journalist, is the author of the just-published Beyond the Green Zone: Dispatches from an Unembedded Journalist in Occupied Iraq. Jamail reported from occupied Iraq for eight months as well as from Lebanon, Syria, Jordan, and Turkey over the last four years. He maintains a website, Dahr Jamail's Mideast Dispatches, with all his writing.