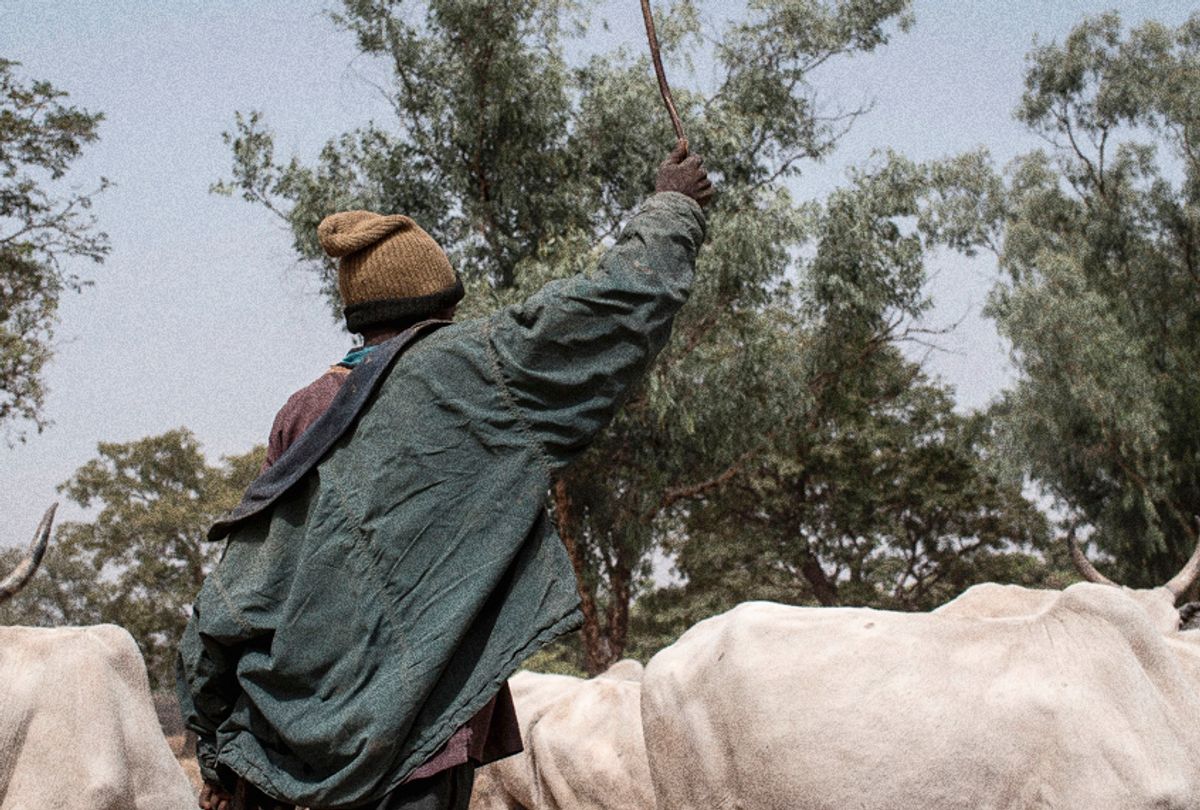 A Fulani herding boy walks with his cows in a field outside Kaduna, northwest Nigeria. (Getty/Stefan Heunis)
--

Boko Haram may grab headlines, but clashes between Nigerian farmers and herders are often deadlier. A recent altercation in the middle of the country, which killed 86 people, received international attention as the most recent manifestation of climate-driven conflict. This problem has been widespread and complex in origin long before it came to the forefront in the media. It may be easy to blame the climate or resource scarcity, but the root of the problem lies in the toxic and violent politics in the country.

Understanding climate change as a driver of all things bad fits into an easy “before and after” narrative that is convenient and perhaps comforting but not necessarily correct. In the case of farmers and herders killing each other, the simplified narrative goes like this: Once upon a time, there was enough pasture for livestock and land for farmers, but those days are over. Now, everyone is fighting over scarce resources and those fights are becoming increasingly violent.

It is true that environmental conditions in West Africa are changing, mostly for the worse, and competition for resources is increasing. But that has been the case for more than 40 years and characterizes the entire West African Sahel, including plenty of places where farmers and herders coexist in peace. Moreover, a narrative of “nomadic” herders systematically killing farmers over land supports our worst preconceptions about conflict in Africa.

Media coverage of the conflicts in Nigeria and neighboring countries such as Mali have provided important nuance to this story, including an emphasis on history and the important role of firearms in escalating grievances to outright bloodshed. The Nigerian state and its agents have long used violence against ordinary citizens, which contributed to the rise of Boko Haram. Still, climate change looms in the background as a “root cause” or a “threat multiplier,” which can let agents of violence off the hook or even empower them further.

The best example of this is the repeated call to combat desertification (a process in which fertile land becomes desert) and restore degraded resources through actions such as tree planting. It’s a win-win: Sequester carbon and re-green the land. This will then provide the resources on which farmers and herders rely and they will no longer need to fight over them. This is a bit simplistic, but it is more or less the idea behind innumerable environmental actions throughout sub-Saharan Africa.

The plan ignores or even erases a century-long history of heavy-handed state interventions in Africa to force local people to plant trees or otherwise restore environmental resources that were deemed to be degraded. In short, conservation has long been an instrument of state repression, and climate change adaptation risks becoming the same. Furthermore, the concepts that underpin interactions such as “desertification” are also problematic. The idea of the Sahara desert marching southward is scientific nonsense. If something called desertification exists at all, it is a localized phenomenon with complex causes and effects.

Grandiose narratives of desertification and noble efforts to combat it live on, however. The best example of this is the United Nations Great Green Wall Initiative. Although it is not entirely clear what the initiative is, influential organizations such as the International Crisis Group advocate for it as a tool to mitigate farmer-herder violence in the region. As proof of the initiative’s ambiguity over 10 years after its launching, one only needs to visit its website or that of a principal donor: the European Commission Development Directorate.

The UN describes it as “a symbol of hope in the face of one of the biggest challenges of our time: desertification. Once complete, the Wall will be the largest living structure on the planet -- an 8000km natural wonder of the world stretching across the entire width of the Continent.”

On the European Commission website, the Great Green Wall is described in less ambitious terms as “a metaphor for the coordination of a variety of international projects, for economic development, environmental protection, against desertification and to support political stability in the heart of Africa.” So, the Wall is not actually a real thing, it is actually a new way of thinking about a batch of conventional development projects.

The UN claims that 100 million hectares of degraded land will be restored through the Great Green Wall Initiative. To do this is in 2018, the risk is not that governments will march villagers out to plant saplings in the countryside (although some might) but rather that the billions of dollars going into the project simply perpetuate state structures that ignore and even prey on ordinary people.

This brings us back to Nigeria, where such predatory structures have eroded the social fabric down to the village level, creating the conditions for the worsening farmer-herder violence. One only needs to look to nearby Central African Republic to see how such conflicts can metastasize into outright state failure. To prevent this scenario, farmers and herders must be able to resolve their differences amicably, which requires not trees but less toxic and violent national politics.