You had me at Merlot: I forgive you, Rex Pickett

The author who single-handedly killed the reputation of Merlot speaks out: sorry, not sorry 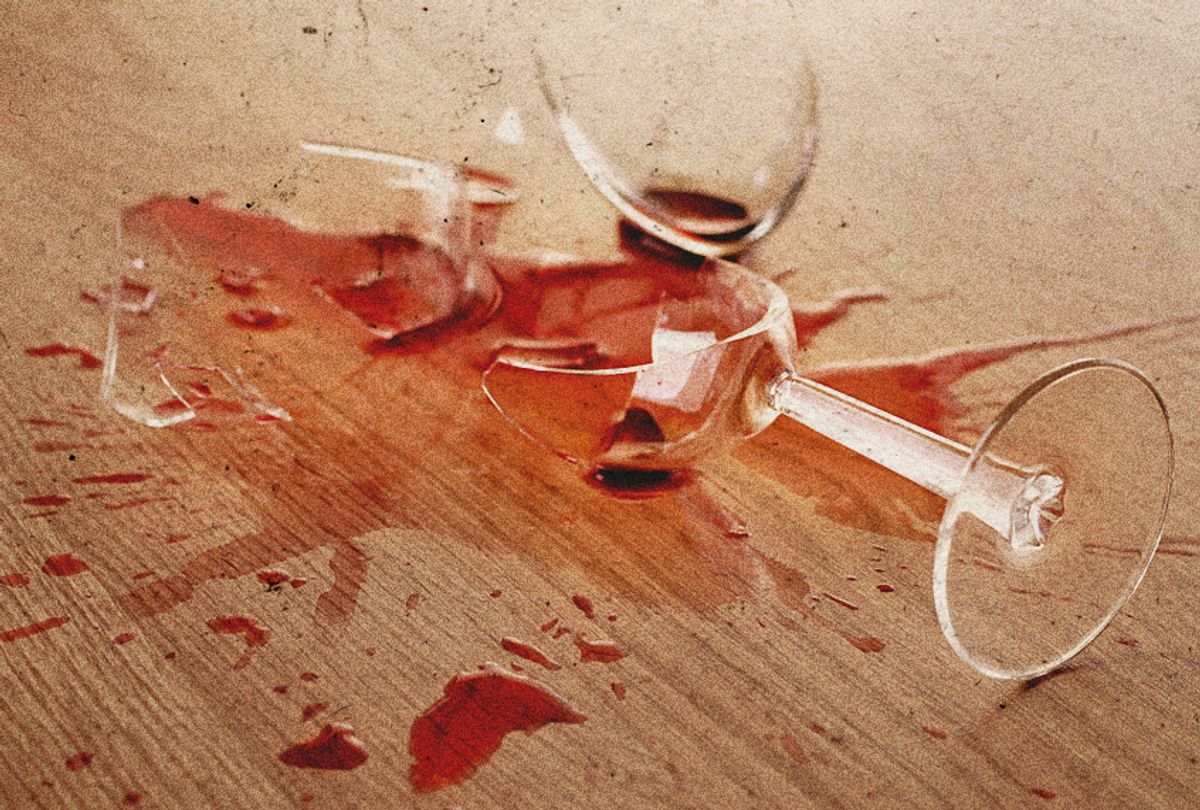 “Give me a fucking break here. I was just a guy living in a rent-controlled apartment writing a novel,” says Rex Pickett, the author of “Sideways,” which was adapted as the acclaimed Alexander Payne film of the same title. He stands stage left as the headline speaker to a sold-out crowd. At a festival. Celebrating Merlot. In Walla Walla, Washington — Bordeaux country. Ah, the irony.

Now, 14 years after the release of the movie, people still want Pickett to atone for the Sideways Effect — the tanking of Merlot sales and the creation of a love affair with Pinot Noir. The infamous line from the film, “If anybody orders Merlot, I’m leaving. I am not drinking any fucking Merlot,” remains a pop culture reference. “Merlot deserved the correction. Pinot Noir, on the other hand, celebrated and rhapsodized over by Paul Giamatti as Miles (me) deserved to be taken more seriously,” says Pickett. “Of course, a movie, a hit movie, an award-winning movie can take one line and blow it all out of proportion. No one knew.”

Pickett looks at ease in the spotlight, standing before wine industry greats from Bordeaux, Napa, Sonoma and Walla Walla, along with the public, all gathered to celebrate the grape variety that he’s been held responsible for killing. The backstory, just like the character Miles in the film, is sorry-not-sorry complicated.

“I didn’t set out to destroy the Merlot industry,” he says, shaking his hands in the air for emphasis. “It’s not my fault.” This gets a laugh, but also is where the plot thickens. It turns out Payne optioned an unpublished manuscript with access to every draft of the novel and could cherry-pick from any version. He kept the Merlot line (which was deleted from the novel) from the first draft for good reason: it’s funny. It’s a punchline that turned Pickett into an unwitting punching bag.

Or maybe we have it all wrong. Like Merlot, Pickett is thick-skinned, more so than we give him credit for.

“The whole notion of being contrite was just a joke,” he shares with me of his visit to Walla Walla. “I'm not contrite about the film bashing Merlot with a line of dialogue I wrote in a then-unpublished novel almost two decades ago.”

At that time, he began to frequent wine tastings at a local shop in Santa Monica — at four bucks a pop, the price was right, but the larger allure was the conversation. “As a writer, I loved the language that surrounded wine.” Pickett also started doing a lot of research. And observed. And listened.

“Back then if you liked Merlot, you were a philistine. Nobody took you seriously; you were ostracized,” he says. “It had become synonymous with the low common denominator in taste. Pinot Noir, however, was a genuine love-at-first-sip for me. I love its femininity — compared to Bordeaux-style wines — its floral complexities, its rapturous notes.”

Pickett finished “Sideways” in 1999 and received over 200 rejection letters — you can view them at his alma mater, University of California at San Diego — and from reading them, you’d never know a hit film ensued. “My ex-wife told me to burn it.” In the end, Pickett was paid only five thousand dollars for the book. “My arm was twisted by forces that I wish I hadn’t listened to,” he laments. “Had I waited until the movie had been released it would have gone for a million, easy.”

Without support from his publisher, Pickett hauled himself off to wine festivals, buying books on his author’s discount, sometimes autographing over 300 books in one afternoon. “My hand cramped,” he recalls. “It was a Brobdingnagian grip-and-grin if there ever was one.”

Instead of being bitter about hardly making any money on the book and essentially being hung out to dry by his publisher, Pickett admits to not leveraging the success of the film like many. “I was too swept up in the emotion of its critical success,” he admits. “But, in the background, the gold rush was on; the greed to cash in was obscenely pandemic.”

It’s not surprising that Pickett was consumed by the film’s critical and commercial triumphs — he was hugely invested artistically. Payne gave Pickett every draft of the script and begged him for input, though he is clear that in the end, every final decision was Payne’s. But Pickett admits to one major contribution: Maya’s speech on wine, distilled from speeches in the book — and which happens to be my favorite part of the film. In early versions of the screenplay, “Miles effuses on about Pinot in his occupationally self-effacing, self-deprecating, even borderline histrionic way, but Maya says nothing,” recalls Pickett, who wrote a note in the margin to Payne: Wouldn't it be lovely if Maya had a complementary speech. It came in the third draft, but was almost cut in post-production. “If he had cut that three minutes out it would have ripped the soul out of the movie, and Virginia Madsen's Maya would have been rendered a cipher.”

And then there are the statistics.

“Merlot was 9 percent of a $38.5 billion American wine market,” said Ashley Trout, owner and winemaker for Brook & Bull Cellars and Vital Wines. “It dropped $77 million in a year. We all had to sit there as experts and watch everybody get it wrong because of one line in one movie.”

It’s worth noting that by the time the film came out, the grape variety was already on shaky soil. “In the ’80s and ’90s, Merlot was flying,” says sixth-generation vintner Jeff Bundschu of Gundlach Bundschu in Sonoma Valley. “You could pronounce it and it was super-duper sexy.” People started farming Merlot like crazy to meet demand, and the quality in the mass market dropped precipitously, along with prices, making it a veritable wine cooler of reds.

Pickett reminds me of a "60 Minutes" segment that aired in 1991, “The French Paradox.” Ah yes, the one where Morley Safer sits at a bistro in Lyon amidst ridiculously fatty foods including paté and black pudding while talking to a cardiologist who suggests that red wine is what protects the French from heart disease. “Merlot was the only red grape variety that beer and distillate drinkers could stand,” says Pickett. “It was a ludicrously flawed study but they quickly turned Merlot into the Vitamin E of the ’90s.”

This is when Pickett points out the silver lining to the Sideways Effect. “The five-dollar crap fell away.”

Premium producers held on and rode it out. “People would come in and refuse to taste it,” recalls Bundschu of his brand’s Merlot — a longtime staple. He panicked and suggested to his father, Jim, that they stop making it. Jim responded with his mantra, “Good wine always wins.”

Pickett agrees. “Merlot winemakers who took their grape seriously initially suffered but then were rewarded by the abandoning of their precious grape by the bad actors, the mechanized farmers, the greed-is-good profiteers who farmed Merlot like it was a russet potato destined for a bag of McDonald’s French fries.”

I’ve often wondered if Pickett has moved on from all this "Sideways" stuff. “There was nothing to move on from,” he insists. “I don’t have an issue with it. In fact, I kind of love it.” He does note that Paul Giamatti is long over it. “I know for a fact that he grows irate when some knucklehead, spotting him at a restaurant, has a bottle of Merlot sent over to his table to get a rise out of him.”

But for Pickett, the love is real and has fueled a career. His "Sideways" sequel, “Vertical,” won the Gold Medal for Fiction from the Independent Publisher Book Awards in 2012, and Pickett adapted the third book in the series, “Sideways Chile,” into a screenplay. He went on to write the stage version of “Sideways,” which enjoyed four wildly successful stagings, including 50 performances at the esteemed La Jolla Playhouse. It should be mentioned that Pickett is no stranger to screenplay form. He wrote and directed two independent feature films and wrote the 2000 Academy Award-winning Best Live Action Short “My Mother Dreams the Satan’s Disciples in New York,” directed by his ex-wife, Barbara Schock, who told him to burn the manuscript “Sideways.” He didn’t walk away with a golden statue, nor get rich off of that either.

Pickett is finalizing the deal to write “Sideways,” the Musical. He announces this while on stage in Walla Walla and, being the unapologetic entertainer he is, sings “No matter how low we go, no fucking Merlot," apparently the chorus of the highlight song.

He just learned that Jay McInerney has chosen the opening 27 pages of “Sideways” for his book, “Wine Reads: An Anthology of Literary Writing on Wine,” set to be released by Grove Atlantic in June. He’ll rub virtual elbows in the book with such greats as M.F.K. Fisher, Jim Harrison and wine critic Eric Asimov, among others.

Despite Pickett’s enjoyment of the “Sideways” afterglow, his work is now taking another direction. In his upcoming novel, “The Archivist,” set for publication in the fall by Blackstone, the two main characters are women, a departure from his buddy-buddy-driven bromances. Pickett describes the novel as a love story centered around, ultimately, a murder mystery, set in a Special Collections and Archives department at a major university.

“For me, it was a glorious leap into the void. Forget Merlot. How about being typecast as the guy who only writes “Sideways”-like stories,” he says. “‘The Archivist’ is something entirely different.  It's layered in a way that ’Sideways’ isn't. It features bold, contemporary themes about truth, preserving the historical record, complicated issues of ethics in the archival world, and love, and adultery, and tragedy, timeless themes that are maybe inchoate in ’Sideways’ in some ways, but which, in ’The Archivist’ effloresces in all its hoped-for, aspired-to, resplendence.”

Toward the end of his talk at the celebration of Merlot, Pickett admits to being smitten with both the Walla Walla Valley and with the Merlot he’s tasted here. “But I can never move here because I have a fucking Merlot bullseye on my back,” he says, and yes, he’s laughing. At that point, a fellow yelled from the audience, “We forgive you, Rex.”

Kirsten Telander is an award-winning fiction writer, co-author of "Wine Taster's Survival Guide," and a contributor to numerous Pacific Northwest publications. She lives in Walla Walla, Washington with her husband, artist Todd Telander, sons Miles and Oliver, and eight chickens.