Americans are not as conservative on immigration as you might think 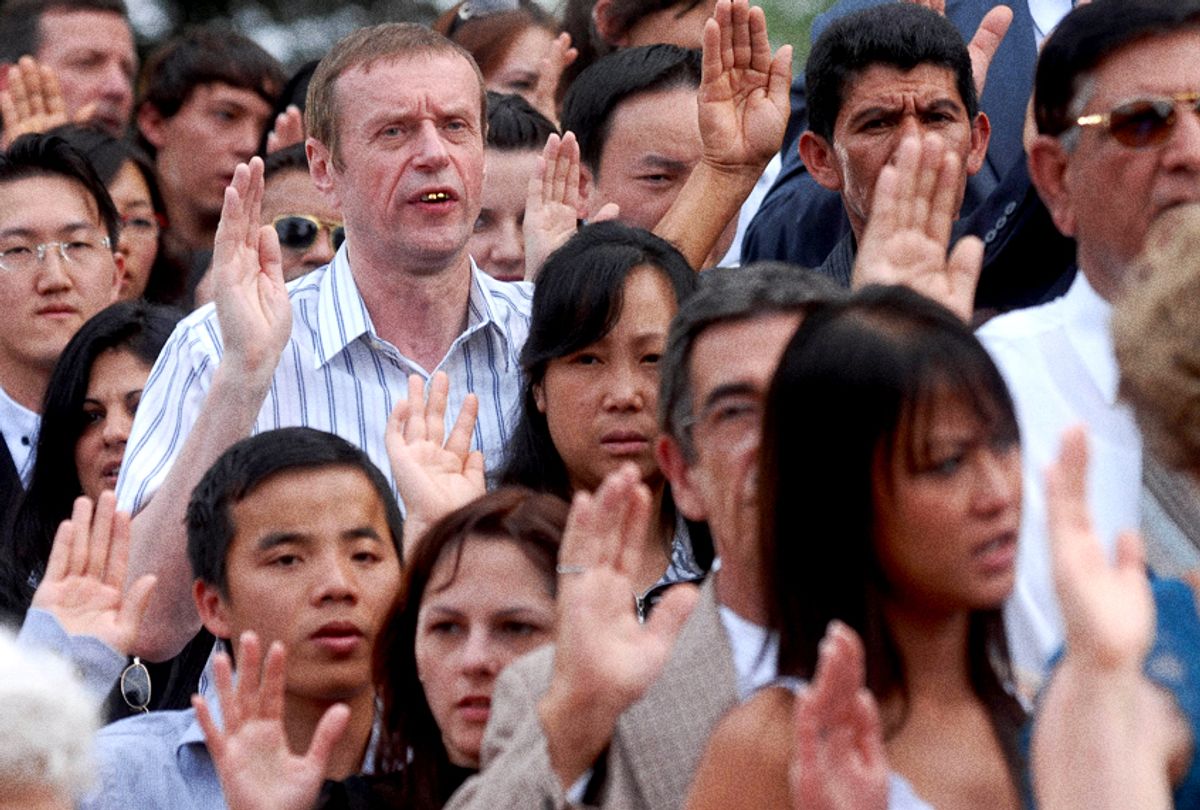 Foreign nationals are sworn-in as United States citizens during a naturalization ceremony at Monticello, the home of Thomas Jefferson. (Getty/Kevin Dietsch)
--

Lawmakers in Washington, from the president down to first-term members of Congress, may be misjudging how the public feels about immigration.

President Donald Trump appears to believe the country needs and wants hard-line policies. Members of Congress haven’t stopped him from carrying out those policies.

Do the American people really support them?

It turns out that government officials who think the majority of Americans want hard-line immigration policies are wrong.

Yet, my research on public opinion about immigration, and that of other social scientists, shows that the American public is supportive of more welcoming immigration policies. Welcoming policies might include a pathway to citizenship for undocumented immigrants, accepting more asylum claims or allowing the use of multiple languages in public places.

Most Americans support a path to citizenship

I am a scholar of public opinion about immigration and national identity, and I have studied how people from a variety of backgrounds feel about immigration-driven diversity in the United States.

Let’s look at public opinion on one immigration proposal that has been debated for over a decade: providing a path to citizenship for undocumented immigrants living in the U.S.

Since late 2007, polls conducted by CBS and The New York Times have asked respondents which option they prefer when it comes to “illegal immigrants working in the United States.” The options include: allow them to stay in their jobs and eventually apply for U.S. citizenship; allow them to stay only as guest workers but not apply for citizenship; or require them to leave their jobs and the country.

This question has been asked in 31 CBS/New York Times surveys since 2007. In 22 of them, providing a path to citizenship is the majority preference. Support for citizenship has not fallen below 50 percent since 2013. In fact, support has increased over time, a trend that has continued throughout Trump’s presidency.

Support for a path to citizenship varies by one’s background when it comes to race, gender, education, income, party and ideology. However, support is high across the board, even among those who say they are Republican or conservative.

Of course, this is only one of many immigration policies getting attention these days, and support for other policies varies.

Attitudes on this policy show that Americans are not as divided or as conservative as the discourse coming out of Washington, D.C. might reflect and is becoming even more supportive of the welcoming approach. Yet, providing a path to citizenship is also the primary policy that seems to keep thwarting legislative reform in Congress.

Public officials may be concerned about alienating non-immigrant whites if they pursue welcoming immigration policies. We tried to find out whether that alienation could happen. In a recent experiment, my colleagues and I asked U.S.-born whites in Arizona and New Mexico how they felt about their state adopting more welcoming or restrictive immigration policies.

We also asked them if the proposed policy would make them feel more or less at home and more or less likely to want to move. Again, we found that liberal and moderate whites, in response to the welcoming treatment, felt more at home and less likely to want to move than did liberal and moderate whites who were given the unwelcoming treatment.

Only conservative whites were happier, less angry, less sad and felt more at home in response to restrictive treatment. Every one else fared better when told that their state was considering adopting policies that welcomed immigrants.

It is worth noting that in the 2016 data mentioned above, only 35 percent of whites identified as conservative while 65 percent identified as either liberal, moderate or other.

Squeaky wheel gets the grease

Given these data, why is a conservative approach to immigration dominating in Washington?

In American politics, it is the squeaky wheel that gets the grease. Within the Republican Party, which holds a majority of seats in Congress, voters with more conservative preferences on immigration and other issues have been more active in recent years than other party members. As long as that continues to be the case, Republican politicians will feel that they need to push restrictive immigration policies if they wish to remain in office, even if the majority of their constituents feel otherwise.

As more and more people respond to President Trump’s immigration agenda with protests and participation in electoral politics, this asymmetry in engagement may change.