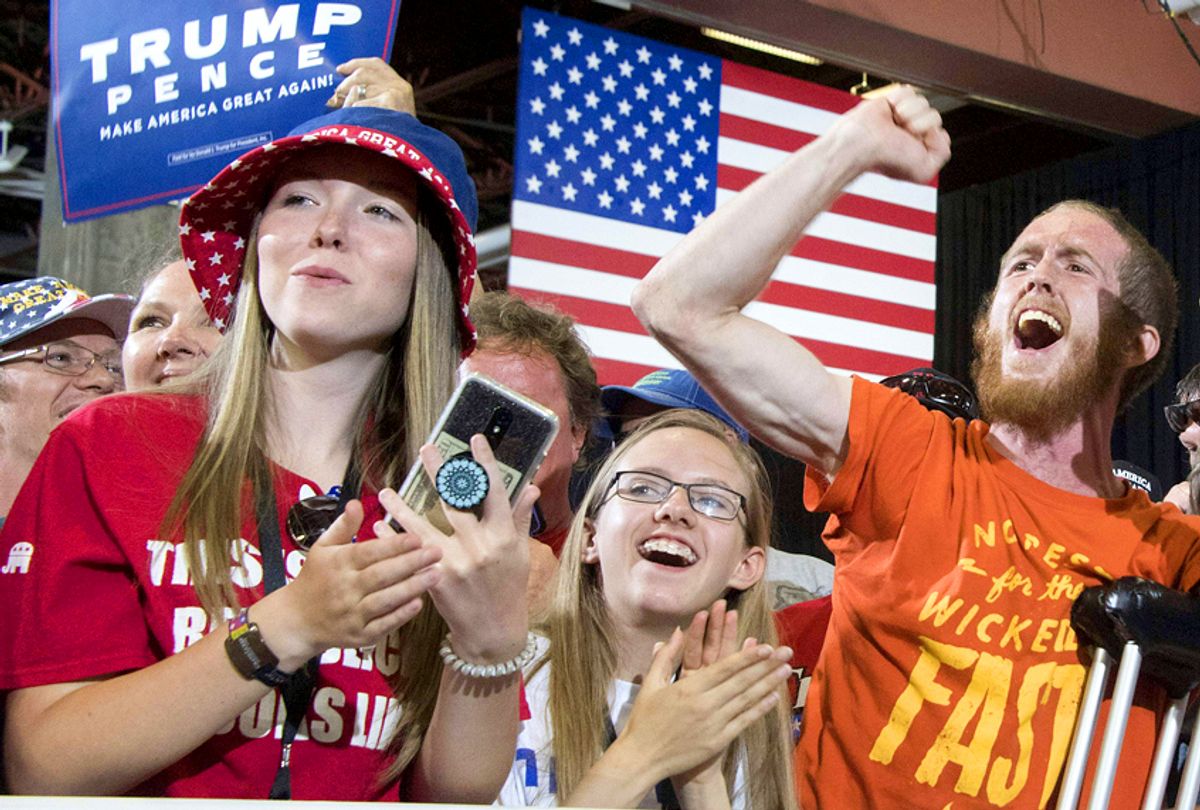 What values are Donald Trump's supporters teaching their children?

If Trump's recent rally in Montana is any indication, these children are learning racism, bigotry, nativism, dishonesty, lying, cruelty, disrespect, sexism, misogyny, anti-intellectualism, ignorance, violence, fascism and authoritarianism from Donald Trump, their parents, and his other supporters.

When the children speak we should all listen.

At last Thursday's rally in Montana a reporter from Buzzfeed asked two white children who were wearing Donald Trump t-shirts and hats which of his issues meant the most to them. Their answers?  "Building the wall", "we don't want Mexicans or illegal aliens" and the "Mexicans are coming over here and overpopulating us".

These answers are textbook racism and xenophobia.

These two white children are likely parroting what they have been taught by their parents and the other adults in their lives. This language with its anxieties about white people being "overpopulated" by nonwhites is just a slightly more "polite" version of the "white genocide" rallying cry common to white supremacists such as neo-Nazis and the Ku Klux Klan. This racist fixation on white people being "oppressed" and "dominated" by nonwhites in America is also mainstreamed by Fox News, the right-wing echo chamber more broadly, and Trump and the Republican Party through the use of eliminationist rhetoric about "snakes", "vermin" and a "nationalist" need to "protect" (white) America's "heritage" and "civilization" from "multiculturalism".

Racism is learned behavior. Parents and other adults teach it to children. The mass media is also one of the primary ways through which racist attitudes and values are taught in American (and global) society. Increasingly the Internet, through social media such as Twitter, Facebook, and YouTube, is being used by white supremacists and other parts of the right-wing to radicalize white children and other young people.

It is extremely difficult to inoculate children against racism and white supremacy. This is especially true in a society such as the United States where the maintenance and protection of white privilege is one of the founding principles and norms of the country.

But there are solutions. Exposing white children to people of different "racial" and ethnic backgrounds is a type of social vaccine against racism and white supremacy later in life. But this is not easy: the United States is highly segregated along lines of race, class--and yes, political attitudes and beliefs.

READ MORE: “Strangers on a plane” Twitter story: Not a rom-com

Moreover, protecting children--both white and nonwhite--from the temptations of and harm done by racism and white supremacy is made even more difficult in the Age of Donald Trump. It is very difficult if not impossible to hide from the white rage and white backlash that foisted him to the White House and which his millions of followers channel and bask in like lizards on a rock.

As such, Donald Trump's ascendance and the cruel authoritarian movement he represents is an assault on childhood innocence. This is especially true for black and brown children and other young people.

And even more damning for the hope that America's white young people are discarding the bigotry of previous generations, social scientists and other researchers have actually shown that in many ways the opposite is true. America's white youth share many of the same racist attitudes and values as their parents and other older relatives but have just learned to be more adept at hiding such beliefs in public.

In the hateful words of the white children at Donald Trump's rally in Montana there are echoes of a very recent past. White boys and girls hurled rocks, bottles, and other missiles at civil rights freedom fighters. In one of the most iconic photos of the third American revolution, 15-year-old Hazel Massery is shown screaming racial slurs at Elizabeth Eckford as the latter bravely integrated Little Rock High School along with 8 other black students.

White children are also visible in other iconic photos as well: they are in the crowd, looking up at the bodies of black people--men, women, boys, and girls--who were lynched by the thousands across the American South and elsewhere. As Toni Morrison explained in her book "Playing in the Dark," whiteness is terror for nonwhites. White folks learn how to wield that power as children so as better to use it as adults. Yes, there are some white folks who disavow such power. But there are many others who are all too eager to use it.

Donald Trump's supporters should be mindful of how when you teach your children to devalue other human beings you are actually teaching them to devalue you as well.

As a society, when white children and other young people recite and channel Donald Trump's racist and bigoted talking points we are seeing a preview of the future. What crop will grow from the seeds that he has planted?

How the mainstream news media fails in its reporting on racism