When Musk made himself part of the story to save the trapped soccer team, a backlash ensued 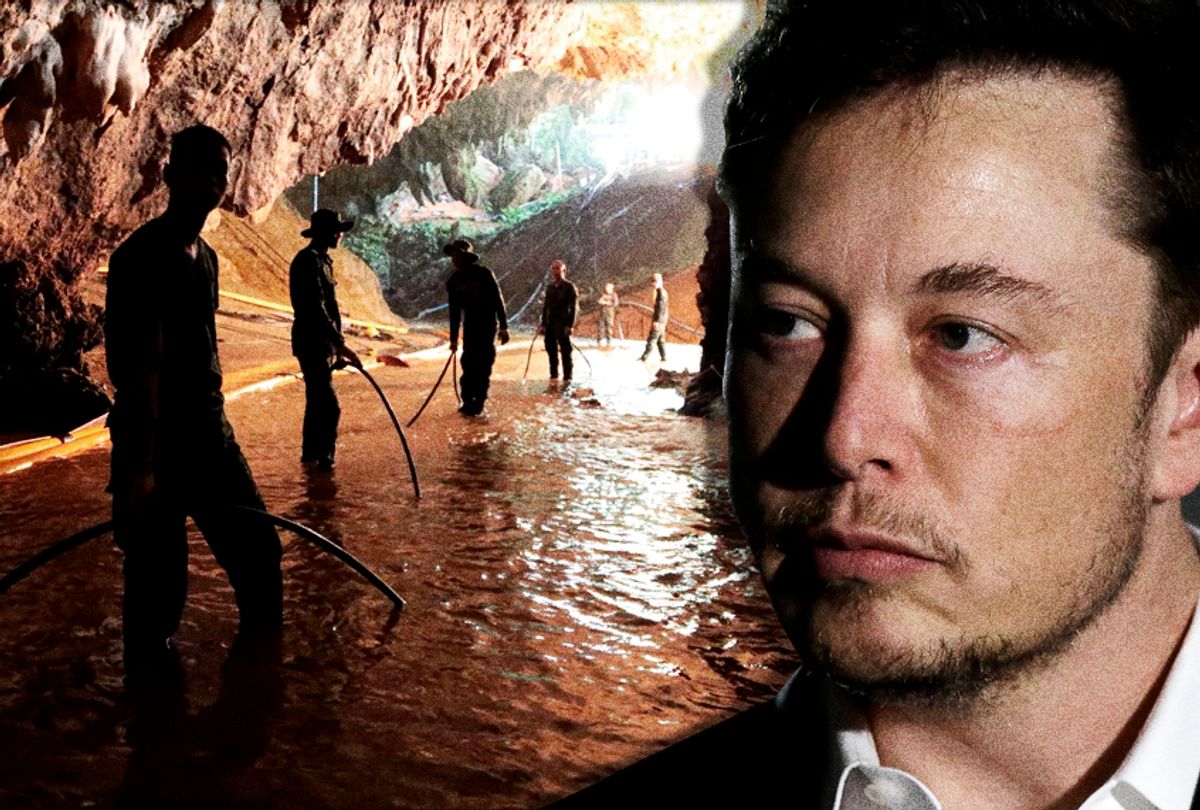 Thai rescue teams arrange a water pumping system at the entrance to a flooded cave complex where 12 boys and their soccer coach have been trapped; Elon Musk (AP/Getty/Salon)
--

When news surfaced in late June that 12 young boys and their soccer coach were trapped in a flooded cave in Northern Thailand, Elon Musk was not part of the story. Indeed, he was the unlikeliest character to infiltrate the narrative. But true to Silicon Valley style, Musk managed to disrupt the mission, causing a controversy on the internet along the way.

It all began on June 23 when the young soccer players and their coach wandered into the Tham Luang cave after practice. Due to heavy rains, they got trapped, and their escape route was cut off. A difficult rescue mission turned into an international multi-week effort to retrieve the kids and coach. One diver died on a mission to deliver air tanks after the group had been trapped for nearly two weeks. During the rescue operation, as news spread about the desperate plight of the team, a stranger on Twitter reached out to Musk to ask for his help.

Yes, it all started with a tweet from a stranger.

“Hi sir, if possible can you assist in anyway to get the 12 Thailand boys and their coach out of the cave,” Twitter user MabzMags tweeted.

Musk replied: “I suspect that the Thai govt has this under control, but I’m happy to help if there is a way to do so.”

This is presumably when the wheels began to turn in Musk’s mind. His response indicates that he had not been thinking about how he might become involved in the rescue prior to that exchange. Could he be the one to provide a technological solution? He was clearly willing to find out.

After floating around a couple ideas, Musk concluded that a mini-submarine would be the most viable option to save the kids and their coach. At this point, he appeared to be treating this rescue mission like another business plan.

"Based on extensive cave video review and discussion with several divers who know [the] journey, SpaceX engineering is absolutely certain that mini-sub can do entire journey and demonstrate at any time," Musk explained on Twitter.

The planning continued over the next day. Musk tweeted footage of the child-size submarine being tested in a pool at a Los Angeles high school. He alerted followers that engineers were on their way to the cave. Eventually he packed his bags and followed suit. Musk kept his followers updated on Twitter about his whereabouts once he arrived.

“Just returned from Cave 3. Mini-sub is ready if needed. It is made of rocket parts & named Wild Boar after kids’ soccer team,” he tweeted. “Leaving here in case it may be useful in the future. Thailand is so beautiful.”

In the end, his mini-submarine was not needed. According to BBC, a government official leading the rescue mission expressed appreciation for his efforts, but said the apparatus was “not practical” for removing the kids.

"The equipment they brought to help us is not practical with our mission,"  Narongsak Osottanakorn, one of the leaders of the rescue mission — and former Governor of Chiang Rai, where the cave was located — said. "Even though their equipment is technologically sophisticated, it doesn't fit with our mission to go in the cave."

“The former Thai provincial governor (described inaccurately as “rescue chief”) is not the subject matter expert,” Musk tweeted. “That would be Dick Stanton, who co-led the dive rescue team.”

Musk continued to share his correspondence with Stanton, one of the rescue divers, on Twitter, to validate his involvement.

Fortunately, everyone has been rescued as of Tuesday.

"We are not sure if this is a miracle, a science, or what. All the thirteen Wild Boars are now out of the cave," the Thai Navy SEALS said in a Facebook post.

Musk has continued to talk about his submarine on Twitter, asking followers if they thought it had a chance, despite the happy ending.

He has even speculated that it could be used as an "escape pod in space."

In emergencies, any effort to help is likely appreciated, especially when rescuers are facing a daunting and nearly impossible task like saving these trapped victims. It really is a miracle they got all got rescued.

However, when a high-profile person gets involved, it does raise questions about motivation and intent. "Is Elon Musk serious?" asked a headline on a Gizmodo story that expressed skepticism at Musk's timing of his involvement.

But some in Thailand tweeted their support of his efforts.

Silicon Valley is obsessed with disruption — creating technology to make any task easier — and Musk's involvement in the mission to rescue the Thai kids epitomizes that. It reflects a typical Silicon Valley entrepreneur's mindset that anything can be achieved as long as technology is involved. As numerous publications have pointed out, the desperation to disrupt has been exhausted of late, and maybe that is why Musk's attempt to get involved was met with criticism.