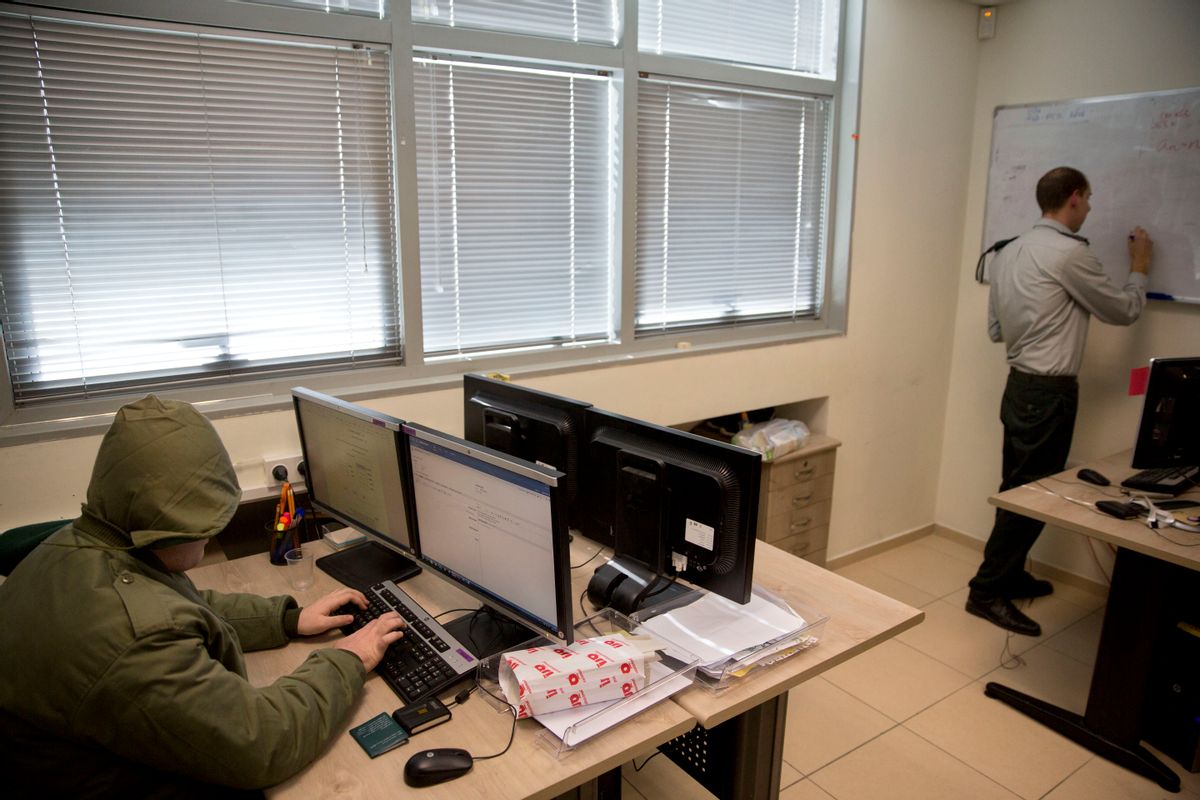 In this photo taken Wednesday, Feb. 9, 2016, an Israeli soldier on the autism spectrum works on a computer as his commander writes on a whiteboard in a small office in downtown Tel Aviv. A military program called seeing into the distance, provides training and assistance to Israelis on the autism spectrm who wish to enlist in the military. (AP Photo/Sebastian Scheiner) (AP Photo/Sebastian Scheiner)
--

For autistic people, employment prospects are grim. Using data collected in 2014 and 2015, a Drexel University study found that only 14 percent of autistic adults in the United States hold paying jobs. In 2016, the university reported that while 60 percent of autistic adults who complete vocational training secure jobs, the majority earn poverty-level wages. The issue isn’t limited to the United States: Gainful employment rates for autistic people remain comparatively low in a number of other nations, including the United Kingdom and Australia.

In recent years, major corporations — particularly those in tech — have purported to offer an antidote. Microsoft, Hewlett-Packard, Google, Yahoo and German software company SAP, among others, have demonstrated a mounting interest in hiring autistic candidates, introducing programs ostensibly designed to recruit them. The logic: At once, these companies address an employment crisis and avail themselves of what Microsoft calls an "untapped" pool of talent.

Efforts to engage people on the autism spectrum interested in pursuing tech careers are, in theory, laudable, especially in light of the current labor landscape. What the work-in-tech narrative elides, however, is these initiatives’ exploitative, paternalistic treatment of the people they claim to exalt.

Conceived as a vehicle of self-actualization in the 1990s, the neurodiversity movement contends that neurological differences such as dyslexia and autism aren’t “disorders,” as much scientific literature classifies them, but natural human variations. More recently, some media outlets have appropriated neurodiversity as a corporate boon. Last year, the Harvard Business Review deemed workers on the autism spectrum a “competitive advantage” for companies, touting such reductive qualities as “loyalty” and “appreciativeness of having been given a chance,” while citing productivity growth and public relations boosts. In 2016, the BBC characterized autistic people as model employees, apt to be “immersed in their work” and attentive to detail. Relatedly, Peter Thiel’s 2014 book Zero to One exhorts companies to hire people on the autism spectrum in order to stimulate “innovation” and thwart “herd-like thinking and behavior.”

These claims, however, serve as a pretext for predatory business practices. Autistic rights activist Elena Chandler told In These Times that the celebration of autistic workers’ putative fealty has an ulterior motive: curtailing turnover. The tech industry has notoriously low rates of employee retention; at Microsoft and Google, the average worker’s tenure falls short of two years, amid such factors as stress and discrimination. Neurotypical people, said Chandler, are commonly “hired at companies like SAP and Microsoft. The company trains them up and helps them develop in the field, and after a few years, they leave and create a competing startup.” Companies seeking autistic people, she added, bank on those candidates’ low likelihood of leaving or asserting their rights as workers — from pay to intellectual property — due in large part to a dearth of alternative job options and limited work experience.

Game developer Ryan Holtz, who has worked for a company acquired by Microsoft, has further concerns. Microsoft, SAP and other companies, he maintains, assume “that people on the autism spectrum will happily work unpaid overtime as long as we’re enjoying ourselves, because we don’t have a social life and so don't know any better. It belies a patronizing understanding of the autism spectrum.”

Chandler and Shaun Bryan Ford, who are both autistic, have  sought work in the tech industry. After applying for technical writing positions at Microsoft and SAP, Chandler said she heard nothing from either company, despite her Ph.D. and history of working in the field. Ford, a media scholar whose mathematical learning disability precludes him from coding jobs, recently participated in a virtual career fair held by Autism at Work, a hiring initiative spearheaded by SAP and adopted by a number of corporations including Microsoft. In a Medium essay, he detailed what he found to be apathy toward aspirants who weren’t white, male computer scientists. The reason, Ford posits, is that recruiting programs and companies such as Autism at Work and Danish company Specialisterne favor statistically well-paid demographics.

“It’s based on profit for them,” Ford told In These Times. “If they recruit high-wage-earning people from the very beginning to come to Microsoft or these other companies, SAP, etc. … they will get a share of this employee’s productivity from the very beginning." (Microsoft declined to comment, and SAP didn’t respond to requests for comment.)

Those who progress to the interview incur a separate set of problems. Bucking the conventional approach of formal, conversation-oriented meetings, which may be challenging for people on the autism spectrum, a number of companies have designed formats wherein applicants complete engineering projects with materials like Legos and marshmallows on campus over the course of two or more weeks. While Microsoft and other corporations have garnered plaudits for heeding the needs of autistic people, the companies’ apparent lack of compensation for multiple weeks’ worth of labor goes unaddressed. (This issue has gained increased attention regarding more traditional tech interviews.)

According to Chandler, prospective tech employers place pressure on autistic applicants not only to perform a task competently, but to distinguish themselves via the aforementioned stereotype invoked by Thiel: what she calls a “magic autistic” tendency to “think outside the box.” This expectation thus begets a narrow hiring focus that sets a significantly high bar of ingenuity for people who already struggle to secure work.

If the experiences of Chandler, Holtz and Ford are any indication, these initiatives seek to include only a small fraction of the autistic population. People on the autism spectrum, then, aren’t spared by capitalism’s value system — they’re among those it harms the most profoundly. The agency and liberation of people of marginalized neurotypes doesn’t, and never will, depend on corporate campaigns to turn a chosen few into a new technical underclass, but on a holistic understanding of what it means to have a dignified, fulfilling existence that doesn’t hinge on corporate approval.

“If a corporation can’t use us to make money, we aren’t useful to society. That’s all of us,” said Ford. “Regardless of what it is their capabilities and 'productivity' are," he added, autistic people “should be able to live a good life.”

Julianne Tveten writes about the intersection of the technology industry and socioeconomic issues. Her work has appeared in Current Affairs, The Outline, Motherboard, and Hazlitt, among others.