Donald Trump's global chaos tour: As he runs wild in Brussels, GOP senators start to back away

After threatening to blow up NATO and declaring victory, Trump is off to London to meet the "Baby Trump" blimp 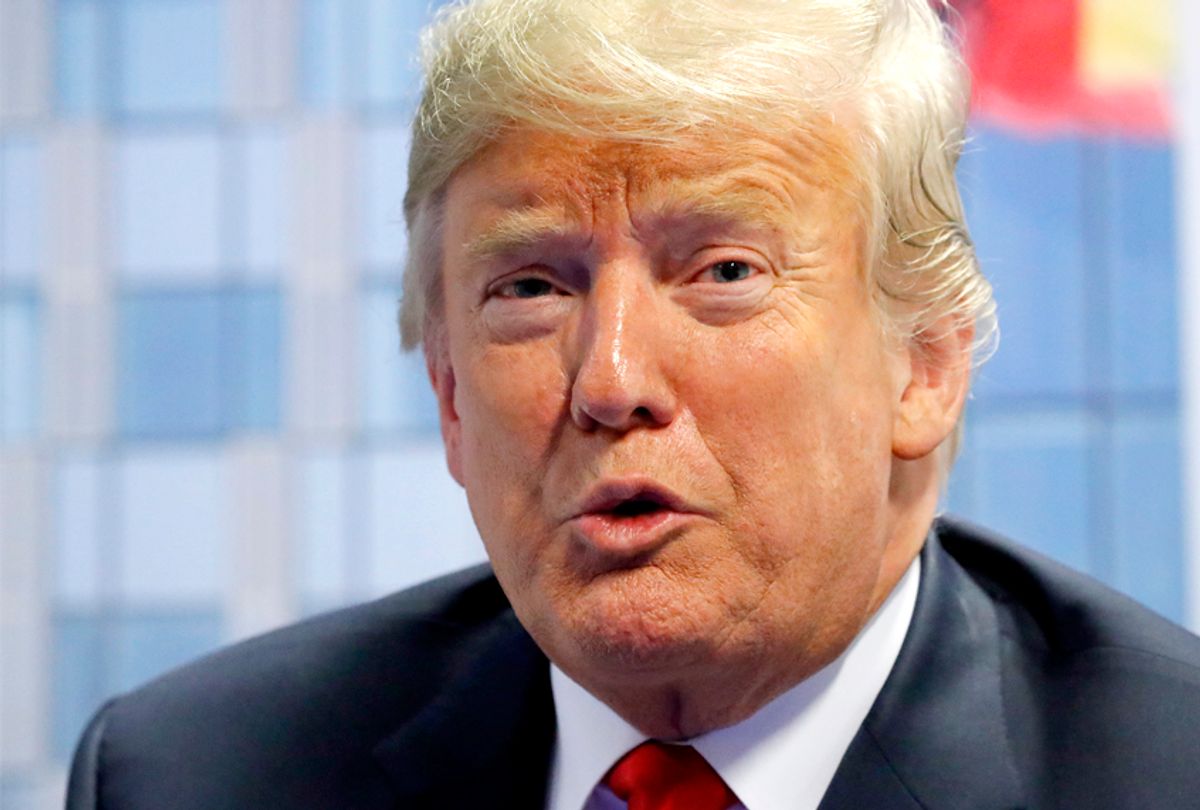 In anticipation of Donald Trump's Global Chaos Tour, a couple of days ago I told everyone to get ready because it was going to be wild. Upon his arrival in Brussels for the annual NATO meeting, the president opened the show with a fusillade of insults toward America's allies, a grand display of ignorance on every key issue and a total disregard for history, diplomacy or the national security of the United States. And then it got really crazy.

He started off at a morning breakfast photo-op on Wednesday with NATO Secretary General Jens Stoltenberg and members of their staffs. Trump proceeded to whine, complain and caterwaul once again about how the NATO countries aren't contributing enough money to what he still portrays as some common NATO piggy bank and implied that they owe the U.S. for overdue payments, which is simply daft. But he made big news when he claimed that Germany is "totally controlled by Russia," which he apparently believes means that Chancellor Angela Merkel is Vladimir Putin's puppet.

He based this upon a bogus claim that Germany gives vast sums of money to Russia in exchange for 70 percent of its energy, and therefore, they are a "captive of Russia" and are the ones betraying the NATO charter. (As usual, he was wrong on the facts. Germany gets about 9 percent of its energy from natural gas, which is the energy in question. About 70 percent of that comes from Russia.)

When Stoltenberg tried to explain that NATO was not about trade, Trump replied:

The fact is that of course NATO countries trade with Russia. So does America. But there's little point in trying to make sense of what he was saying because he clearly had no idea himself.

Later, White House Press Secretary Sarah Sanders released a statement saying that instead of the 2 percent of GDP that the NATO countries have agreed to budget for military spending by 2024, Trump is now demanding that they double that to 4 percent. Shortly thereafter, Trump tweeted this, which slightly walked back his imperious demand:

Before leaving Brussels, Trump held an unscheduled press conference on Thursday during which he claimed that all NATO member nations had promised to "substantially up their commitment" to defense spending after he had told them he was "extremely unhappy." As The Washington Post drily reported, "It was not immediately clear what specific new commitments had been made."

No one quite understands why the president is so intent upon everyone arming themselves to the teeth, but we know it isn't because he wants America to cut back. He wants to increase U.S. defense spending as well. Evidently, he wants everyone putting vast amounts of resources into a global war machine. What could go wrong?

The truth is that this is completely unrealistic. So the more obvious explanation is that Trump is seeking to break up the NATO alliance the same way he tore up the Paris climate accords and the Iran nuclear deal. He also plans to abrogate NAFTA, withdraw from the WTO and who knows what else. ( He says right in that tweet: "What good is NATO . . . ?")

At least that was how Russian state TV saw it:

Perhaps that's one of Trump's "deliverables" for his upcoming summit with Putin in Helsinki.

Meanwhile, back at home there was some highly unusual activity in Congress. You may recall that a delegation of Republican senators visited Moscow over the July 4 holiday and were quoted as being extremely accommodating, if not downright servile, to their hosts. The leader of the delegation, Sen. Richard Shelby, R-Ala., said they were there to “strive for a better relationship, not accuse Russia of this or that or so forth.” Others were even more generous:

Someone must have pointed out that they had come off as useful idiots because, according to the Daily Beast, several senators who were there are now saying that the meetings were confrontational and tense, with the Russians leaning heavily on the senators on the issue of sanctions while insisting that the election interference never happened.

Sen. John Kennedy, R-La., said the Russians had been under the impression that only Democrats believed that Russia had been involved. It's not hard to understand why they would have made that assumption. This is the first time we've seen any Republican elected officials, beyond a handful of retiring senators, give even the slightest indication that they are concerned about it.

Somewhat surprisingly, both the House and the Senate passed nearly unanimous bipartisan resolutions affirming support for NATO. They don't actually mean anything and they won't do anything serious to restrain Trump, but it's possible that Republicans making some slight attempt to tell the world that Trump's bellicose comments are not endorsed by his party will provide some reassurance.

That wasn't all. The Senate also voted 88-11 for a non-binding resolution to stop Trump from using national security as a rationale for imposing tariffs willy-nilly when he wakes up on the wrong side of the bed in the morning. Analysts are saying it was a test vote to see if they can override a veto. It's unclear how many Republicans would hang tough if Trump actually bothers to veto the bill.

Finally, a bipartisan group of senators has introduced a resolution condemning the Russian incursion in Crimea and calling on the Trump administration not to recognize Russia's land grab. That too will not be binding, but its timing just before the summit with Putin is not an accident.

Perhaps this is all just CYA behavior for Republicans who can see the handwriting on the wall in a tough election season. Or maybe they only manage to find their lost intestinal fortitude when the president is out of town. But it's also possible that Trump is starting to scare some of them as much as he's scaring the rest of the planet.

This NATO debacle was just the opening act of the Global Chaos Tour. Now he's off to London, where he'll meet the queen, encounter large protests and be followed around by a gigantic "Baby Trump" blimp. That should be highly entertaining. It's when Vladimir Putin joins him on stage for the big finale in Helsinki that we'll see the real pyrotechnics.