On "The Late Show" Wednesday, Colbert was "not ready to say that our president is a Russian agent, but . . ." 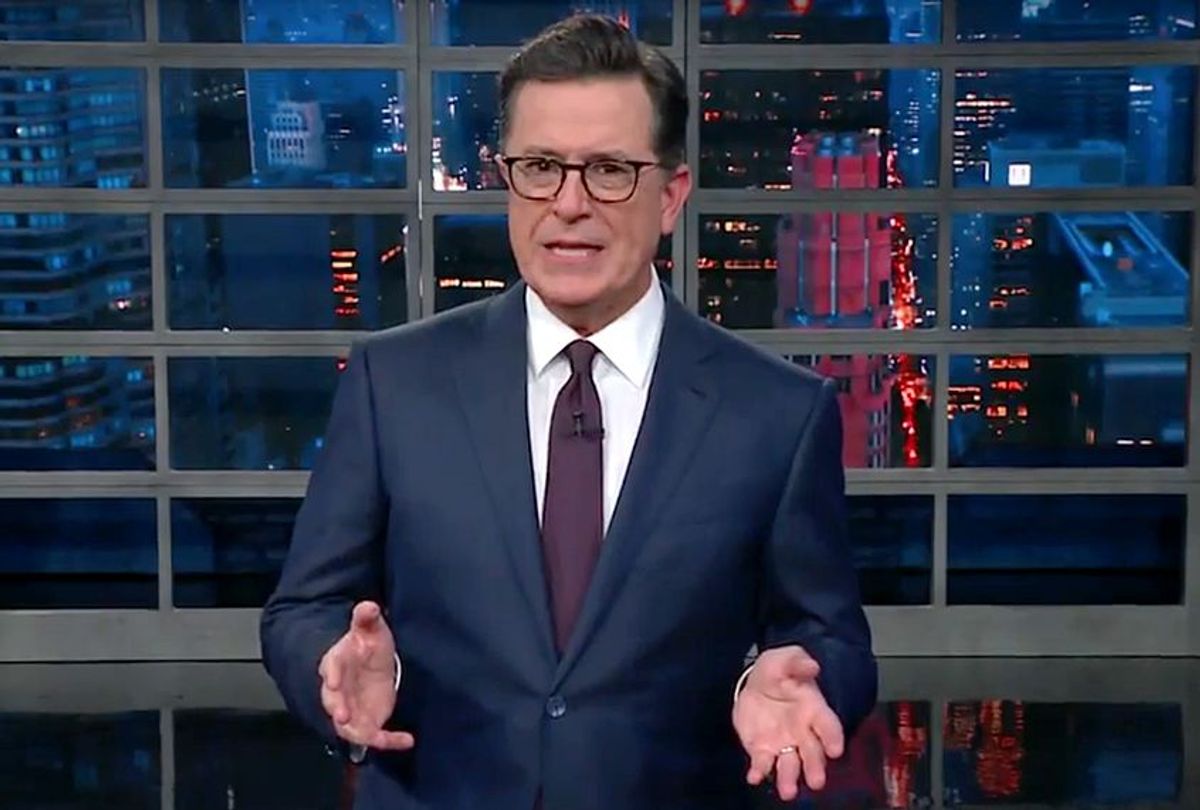 President Donald Trump is in Europe for the NATO summit and he has wasted no time when it comes to hurling attacks. "Germany, as far as I’m concerned, is captive to Russia because it’s getting so much of its energy from Russia," he said at the opening breakfast of the NATO summit meeting.

So Stephen Colbert used the first portion of his opening monologue on "The Late Show" Wednesday night to address Trump's actions at the summit and, in general, his manner of conducting diplomacy with supposed U.S. allies.

"It is the first full day of Donald Trump’s trip to Europe. He’s in Brussels for the NATO summit, and then it’s on to England, then he’s going to straight to hell," Colbert said, before correcting himself. "I’m sorry, Helsinki. To meet with Vladimir Putin."

The late-night host then summarized how chaotic the trip has been so far, and it's only been one day.

"As The New York Times put it, 'Mr. Trump kicked off his meetings on a contentious note.' Contentious is his only note! He’s a human air horn," Colbert said. "The bumpy ride started at a breakfast with NATO Secretary General Jens Stoltenberg," he added.

"Right off the bat, Trump directed his one note at one particular country," Colbert continued, and the show played a clip from the meeting highlighting Trump's attack on Germany, saying the inflammatory statement: "Germany is totally controlled by Russia," because they buy oil and gas from them.

But beyond the deflection, the comedian also made sure to point out the ridiculousness of Trump's assertion. "Trump claims Germany is controlled by Russia because 35 percent of their natural gas comes from Russia," he said. "It’s true, we’re all controlled by the people who give us our gas, which is why I’m forever beholden to the Chevron on route 3. When they invaded the Pizza Hut next door I said nothing. What could I do?"

In the end, Colbert described Trump's tirade against Germany as unsurprising, because before the president left for Europe, he noted of all his upcoming stops, saying, "frankly, Putin may be the easiest of them all. Who would think. Who would think?" Trump said.

"I would think," Colbert replied. "Everyone would think. Now, I’m not ready to say that our president is a Russian agent, but I have an agent — and he doesn’t do as much for me as Trump does for Russia," adding that his agent never "swung an election for me."

To further prove Colbert's point about Trump's deep-seated obligation to Russia, he played a clip from Fox News Digital Political Editor Chris Stirewalt. "You will not stop Donald Trump from undermining NATO," Stirewalt said. "You will not stop him from realigning U.S. foreign policy to be more favorable towards Russia. He is going to do it. He is going to fly into Brussels like a seagull, is he going to defecate all over everything, squawk and fly away."

Colbert reasoned that whether you like the president or not, his motivations are undeniable at this point. "We all know what’s going on here. Trump is trying to weaken the EU and weaken NATO and break up the European Alliance, which is exactly what Russia wants," he said. "This is not a theory. This is happening in public. What we don’t know is why."

The late-night host suggested that perhaps it's to finally build a Trump Tower in Moscow or to leverage Russia against China. "Or maybe Putin has a tape of him in a hotel with two hookers going 'Ahhh, daddy likes. I love it. I love it!' All of that is open to debate — but it’s the last one," Colbert concluded.

Clapper on how US became a "ripe target"