Why is Donald Trump so sweet on Vladimir Putin? It might just be personal financial gain

What's behind the bromance? Forget the pee tape — it's more likely a long list of shady Trump business deals 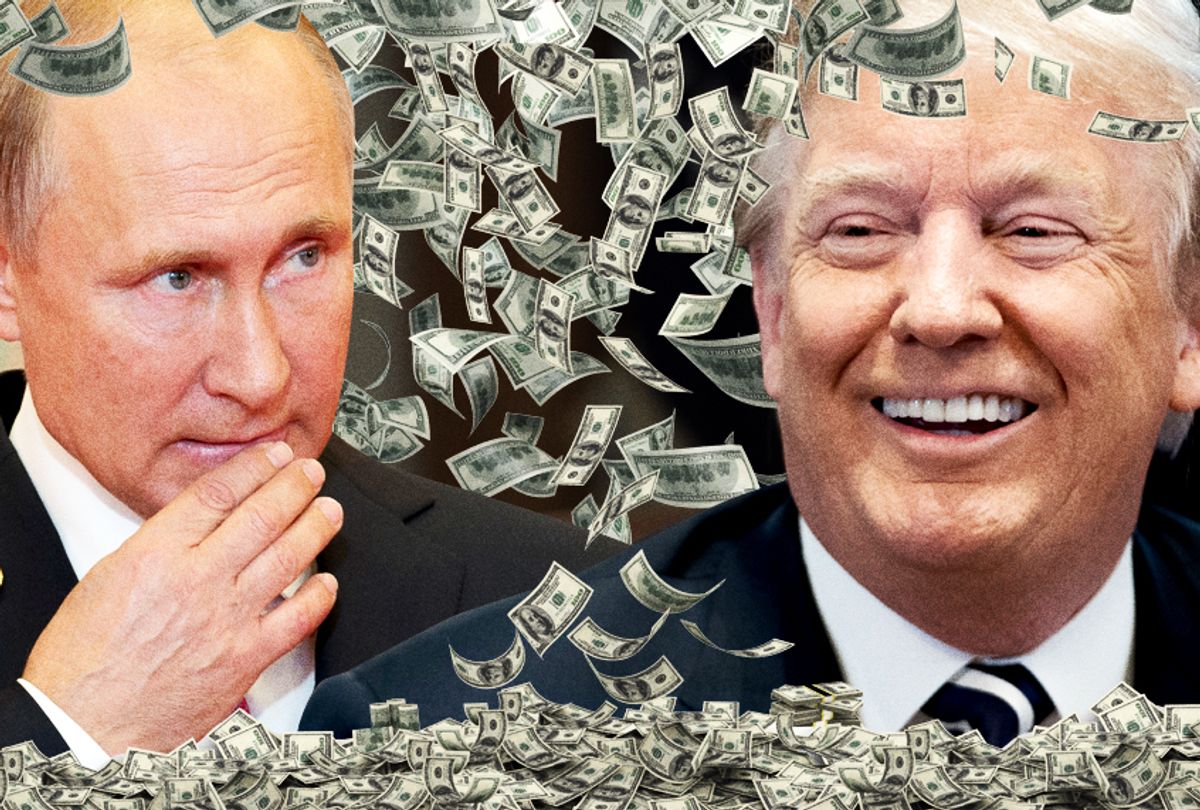 Donald Trump's insistence on a summit with Vladimir Putin, disregarding the advice of aides and worries of allies, is consistent with his obsession with the Russian leader. But it’s inconsistent with his pattern of choosing policies that resonate with his supporters -- there’s no indication that Trump's followers condone this bromance.

So why does Trump pander to Putin? He won’t criticize him and incessantly flatters and coddles him. He has winked at the annexation of Crimea, threatened NATO, suggested that the G7 should readmit Russia, and done nothing to prevent Russian meddling in U.S. elections.

Many fear Trump will hand Putin unwarranted concessions, like unraveling U.S. sanctions against Russia. Trump was always soft on them anyway. After Russia requested a secretary of state who favored lifting them, Trump obliged, appointing Rex Tillerson instead of Mitt Romney. When Congress enacted sanctions on 15 Russian entities and individuals in 2017, Trump delayed implementing them for seven months and reversed a decision to impose more.

What could be motivating Trump's largesse toward Russia? It's hard to argue that it's what’s best for America. A pattern of reported facts suggest it could be personal financial gain.

Throughout the 2000s, Russians bought many apartments in Trump Tower and $100 million worth of Trump properties in Florida. But these sales dropped precipitously in 2014 after the U.S. imposed sanctions on Russian oligarchs for the Crimean incursion. Lifting sanctions would likely restore these sales, and the profits would flow through a trust run by Trump's sons, with the president as sole beneficiary. Indeed, Trump admitted that he’d “be looking at” lifting them.

Trump has many business aspirations in Russia that Putin can make or break. In 1986, Trump met with the Soviet ambassador about building a luxury hotel in Moscow, and announced a potential Trump International complex there. At the 2008 Russian Real Estate Summit, Trump touted plans for condos and hotels in Moscow, St. Petersburg and Sochi. In 2011, he licensed his name to an aborted Azerbaijan hotel for $1 million and promoted a Trump Tower in Kazakhstan. Even as he campaigned for the Republican nomination, Trump signed a letter of intent to build Trump Tower in Moscow.

Trump’s business depends heavily on Russian money. Donald Trump Jr. said in 2008 that “Russians make up a … disproportionate cross-section of … our assets,” and later added, “We see a lot of money pouring in from Russia.” Eric Trump told a journalist, “We don’t rely on American banks; we have all the funding we need out of Russia.” (He later denied saying that.)

In 2008, Deutsche Bank’s real estate group stopped lending to Trump after he defaulted on a $330 million loan. Inexplicably, he subsequently borrowed $75 million from another DB group. European and American regulators punished DB for laundering billions from Moscow. It’s not a huge leap to suspect that Trump’s DB money came from Russia.

Since Trump’s nomination, 70 percent of Trump sales were to limited liability companies frequently used by Russians to hide their identity, stow cash and, most likely, violate U.S. sanctions. Hundreds of millions of dollars from unidentified sources funded Trump’s unprofitable golf courses in Ireland and Scotland. Testimony before Congress suggests they were used to launder money for the Russian mafia. Steve Bannon told Michael Wolff, in speaking of White House corruption: “This is about money laundering … the path to …Trump goes right through Paul Manafort, Don Junior and Jared Kushner.”

The blackmail potential in all these financial shenanigans is abundant. Implicating Trump in almost any of these schemes could expose him to charges of money laundering and bank fraud.

Trump’s threat to cut aid to Central America damaged trust in the U.S. Now Putin is providing aid there, reopening military bases and building a satellite-tracking station that could spy on the U.S. Trump’s rejection of Obama’s soft Cuba policy may result in a repeat of Cuba’s pivot to Russia after Dwight Eisenhower rejected Cuban efforts for diplomatic and trade ties. Trump’s trade tariffs and insults of EU and Canadian leaders threatens relationships with our closest allies. His escalating criticism of NATO make some worry the United States might actually leave the alliance – the ultimate gift to Putin.

Congressional Republicans are muting their nervousness about Trump giving away the store, settling for bromides about how there's nothing wrong with just talking to Russia. It's hard to imagine how talking under these conditions will serve America's interest, but on the other hand, we may finally see Trump Tower built in Moscow. In keeping his stakes in 500 foreign businesses -- no other president had any – Trump has unprecedented cause to tailor foreign policy for personal gain. He promised to “drain the swamp,” but there are more reptiles in it than ever, and many speak Russian.

Famed law professor is defending Trump, but still lays out a scenario for impeachment.