"The Five's" Dana Perino noted that, at some points, Thursday's congressional hearing "felt like a public lynching" 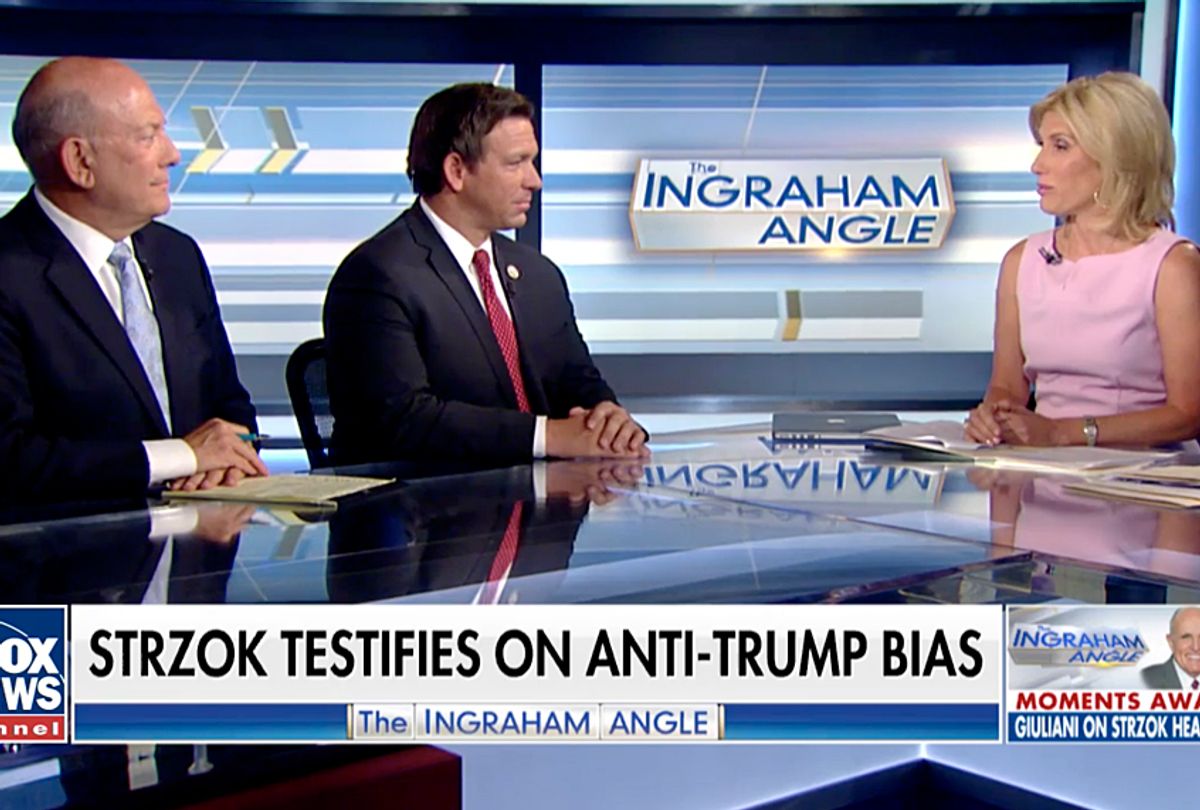 Meghan McCain joined the chorus of conservatives in the media who criticized the grilling of former agent Peter Strzok by members of the GOP over his work on the FBI's Russia probe – and an earlier investigation into Clinton's use of a private email server when she was secretary of state – during his testimony Thursday before the House Judiciary and House Oversight and Government Reform Committee.

"I thought it was Kabuki theater," McCain said Friday on "The View." "Congressmen on each side of the aisle trying to get clips. They should pull the cameras out of these hearings . . . because everyone's just grandstanding for it!"

Fox News host Dana Perino also could not get behind the heated – and at times combative – exchange between congressional Republicans and Strzok, because it "felt like a public lynching."

Perino, who co-hosts "The Five," specifically condemned Rep. Louie Gohmert (R-TX) for asking Strzok about the affair he had with former FBI lawyer Lisa Page.

"Several Republicans – including Louie Gohmert – I will say, went way overboard," the Perino said. "It felt like a public lynching, and I thought it was terrible."

Gohmert slammed Strzok with personal questions on Thursday, including how often he looked "innocently into [his] wife's eyes" while having an extramarital affair with Page.

"I can't help but wonder when I see you looking there with a little smirk: How many times did you look so innocently into your wife's eye and lie to her about Lisa Page?" Gohmert asked.

After being booed by Democratic members in the chamber, Gohmert defended his remark, saying: "The credibility of the witness is always an issue."

At the same time, Perino also blasted Democrats for an "outrageous" suggestion that Strzok deserved a Purple Heart during the hearing.

"I did think it was quite odd that you had the one congressman on the Democratic side — said he wanted to give Peter Strzok a Purple Heart, which is outrageous," she said. "That's disgusting, actually, to suggest, given what the Purple Heart is actually for."

Rep. Steve Cohen (D-TN) was the congressman who said the embattled FBI agent deserved a Purple Heart for enduring aggressive questions from House Republican during the hearing.

"Mr. Strzok, I don't know where to start," Cohen said. "If I could give you a Purple Heart, I would. You deserve one."

Laura Ingraham, another Fox News host, also railed against the conduct of the House Republicans during Strzok's testimony, telling viewers on her show Thursday night that many of the jabs thrown during the 10-hour testimony simply were not successful.

"I have to say that I was looking forward to this," Ingraham professed. "But, I thought at times, it wasn't working for the Republicans."

"I like Louie Gohmert a lot," Ingraham said. "I thought that moment — that exchange with Gohmert and Strzok — I didn't think that was good. And, I wouldn't want to have been one of the Republicans on that committee when that went down."

Strzok, who was testifying on Capitol Hill under subpoena, has been accused of anti-Trump bias by the White House and Republicans after text messages exchanged between Page and he were revealed in a report from the Justice Department's internal watchdog group last month.

Strzok defended the FBI and expressed regret for his personal statements — which called then-candidate Donald Trump "horrible" and "disgusting," while telling Page, "we'll stop him" — over the course of a 10-hour hearing. Strzok also claimed that his text messages were not indicative of anti-Trump bias, and he further insisted they had not affected the way he had conducted his investigations.

"The proposition that [bias] is going on — and that might occur anywhere in the FBI — deeply corrodes what the FBI is in American society — the effectiveness of their mission — and it is deeply destructive," Strzok said.

Deputy Attorney General Rod Rosenstein announced Friday that a federal grand jury had charged one dozen Russian intelligence officers of hacking Democrats during the 2016 presidential campaign, according to a new indictment in the investigation into Russian interference in the U.S. election led by Special Counsel Robert S. Mueller, III.