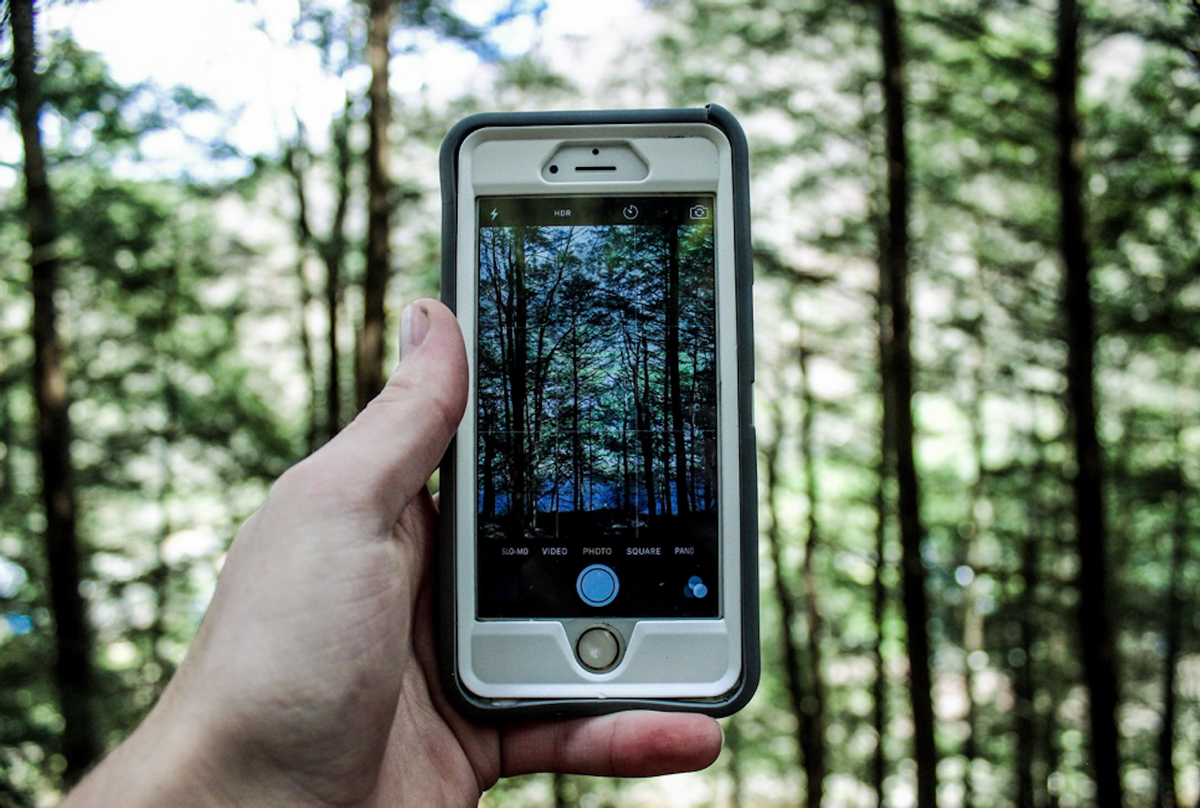 There is growing evidence that our addiction to cellphones could be impacting brain functionality and be the cause of stress, anxiety, insomnia and a lack of attention and focus. Now a new report has found that we’re not the only living things to be affected by our increasing dependence on wireless technology. Mammals, birds, insects and even plants are likely being harmed by the electromagnetic radiation (EMR) emanating from Wi-Fi, cellphone towers, broadcast transmitters and power lines, according to a new analysis of 97 peer-reviewed studies conducted by EKLIPSE, a biodiversity and ecosystem project funded by the European Union.

The researchers said that “evidence is accumulating that mammals (e.g., bats and mice) have a magnetic sense” that is affected by radio-frequency-modulated electromagnetic fields (RF-EMR). Birds in particular may be highly susceptible. The researchers found that even weak magnetic fields in the radio frequency range can disrupt birds’ magnetoreception, their ability to use the Earth’s magnetic fields to orient themselves and find their way home.

Homing pigeons are well-known for their magnetoreception, but this sense has also been detected in other animals, like red foxes, and there is evidence that even large mammals like deer use the planet’s magnetic fields to sense direction. A number of invertebrates, including worms, mollusks and fruit flies also use this ability.

The report also concluded that EMR can also alter the metabolism of plants, causing “significant changes … demonstrated at cellular and molecular levels.” The authors noted that even a low level exposure to EMR “caused a rapid increase in stress-related transcript accumulation in tomato [plants].” Transcription is the first phase in the expression of a gene, in which a specific segment of DNA is copied into RNA.

The authors said that their findings indicate “an urgent need to strengthen the scientific basis of the knowledge on EMR and their potential impacts on wildlife,” specifically calling out the “need to base future research on sound, high-quality, replicable experiments so that credible, transparent and easily accessible evidence can inform society and policy-makers to make decisions and frame their policies.”

The UK charity Buglife (which proposed the analysis) warned that there wasn’t enough research to determine limits to EMR pollution. The group said that “serious impacts on the environment could not be ruled out” and urged that 5G transmitters should not be placed near street lights, which attract nocturnal insects like moths, nor in areas near wildlife.

Buglife CEO Matt Shardlow, who served on the experts steering group of the report, warned that “there is a credible riskthat 5G could impact significantly on wildlife.” He added:

“We apply limits to all types of pollution to protect the habitability of our environment, but as yet, even in Europe, the safe limits of electromagnetic radiation have not been determined, let alone applied. This is a classic case of out of sight out of mind, just because humans cannot see electromagnetic radiation this does not mean that animals cannot ‘see’ the pollution or be significantly impacted at a neural or cellular level. A proper research program and clear policy measures are long overdue.”

Shardlow specifically warned of the current rollout of 5th-generation wireless systems, or 5G networks, and called on telecommunications firms to research the impact of their wireless technology on wildlife and make their findings public. In May, Qatar become the first nation in the world to have a 5G network. The worldwide commercial launch of 5G is expected in 2020.

The report authors also said that strong EMR fields increase the temperature in living tissue, but the intensity needed to induce such heating is “not experienced by wildlife (so far).” It’s notable that they left the door open to this other potential emerging threat, as cellphone adoption rates are steadily rising globally. The number of smartphone users worldwide is forecast to grow from 2.1 billion in 2016 to around 2.5 billion in 2019, according to Statista, a market research firm. That means more cell towers—and more EMR being emitted into the environment.

“When you start to observe and realize that swallows and house martins no longer nest in towns and villages, when you realize that the sparrows have all disappeared, that in the evenings there are no bats flying in the dusk and that you no longer hear owls hooting, then you will begin to know what effect microwaves from cell towers and antennas are having on the environment,” said one commenter to a One World News article about the report.

The report comes on the heels of a recent appeal to the United Nations, signed by more than 200 scientists from 41 countries, urging the international body to address the risks posed electromagnetic fields (EMF), physical fields produced by objects charged by electromagnetic fields and radiofrequency radiation. Specifically, the scientists want the UN to “recognize that EMF exposure is an emerging health and environmental crisis that requires a high priority response.”

“Biologists and scientists are not being heard on the committees that set safety standards,” said Dr. Martin Blank of the Department of Physiology and Cellular Biophysics at Columbia University and signatory of the appeal, in a video address on the website of International EMF Alliance, a group founded in 2009 that disseminates information to policymakers and health authorities about the potential effects of electromagnetic radiation. “The biological facts are being ignored and as a result, the safety limits are much too high. They are not protective.”

Though evidence is mounting that humans may also be physiologically affected by EMF, the jury is still out on the impact of long-term low-frequency exposure. The World Health Organization (WHO) concluded that “current evidence does not confirm the existence of any health consequences from exposure to low level electromagnetic fields.” However, the agency does admit that “some gaps in knowledgeabout biological effects exist and need further research.”

But the WHO is partially responsible for the widespread concern. As Bob Berman points out in his recent book "Zapped: From Infrared to X-rays, the Curious History of Invisible Light":

“Some of the fears are based on a report issued in 2011 by the World Health Organization’s International Agency for Research on Cancer (IARC). The agency had gathered in Lyon, France, to discuss scientific studies surrounding the question of whether there’s a relationship between radio-frequency-modulated electromagnetic fields (RF-EMF) and cancer. After intense deliberations, and to the great surprise of the world at large, experts decided to classify RF-EMF waves emitted by cell phones, cell towers, and Wi-Fi networks as category 2B, indicating a ‘possible human carcinogen.’”

For Dr. Blank and his colleagues raising the warning flag to the United Nations, the evidence is clear. “Cellphones, tablets, Wi-Fi, etc. Putting it bluntly, they are damaging the living cells in our bodies and killing many of us prematurely,” he said in his video address. “Rising exposure to electromagnetic radiation is a global problem. The World Health Organization and international standard-setting bodies are not acting to protect the public’s health and well-being. International exposure guidelines for electromagnetic fields must be strengthened.”

In his video address, Dr. Blank suggested that the current EMF safety limits may be inadequate due to the influence of the telecommunications industry on the policymakers. “More protection will probably result from full disclosure of possible conflicts of interest between regulators and industry,” he said.

“We have created something that is harming us, and it is getting out of control. Before Edison’s lightbulb, there was very little electromagnetic radiation in our environment. The levels today are very many times higher than natural background levels and are growing rapidly because of all the new devices that emit this radiation. An example that a lot of us have right now in our pockets is the cellphone.”