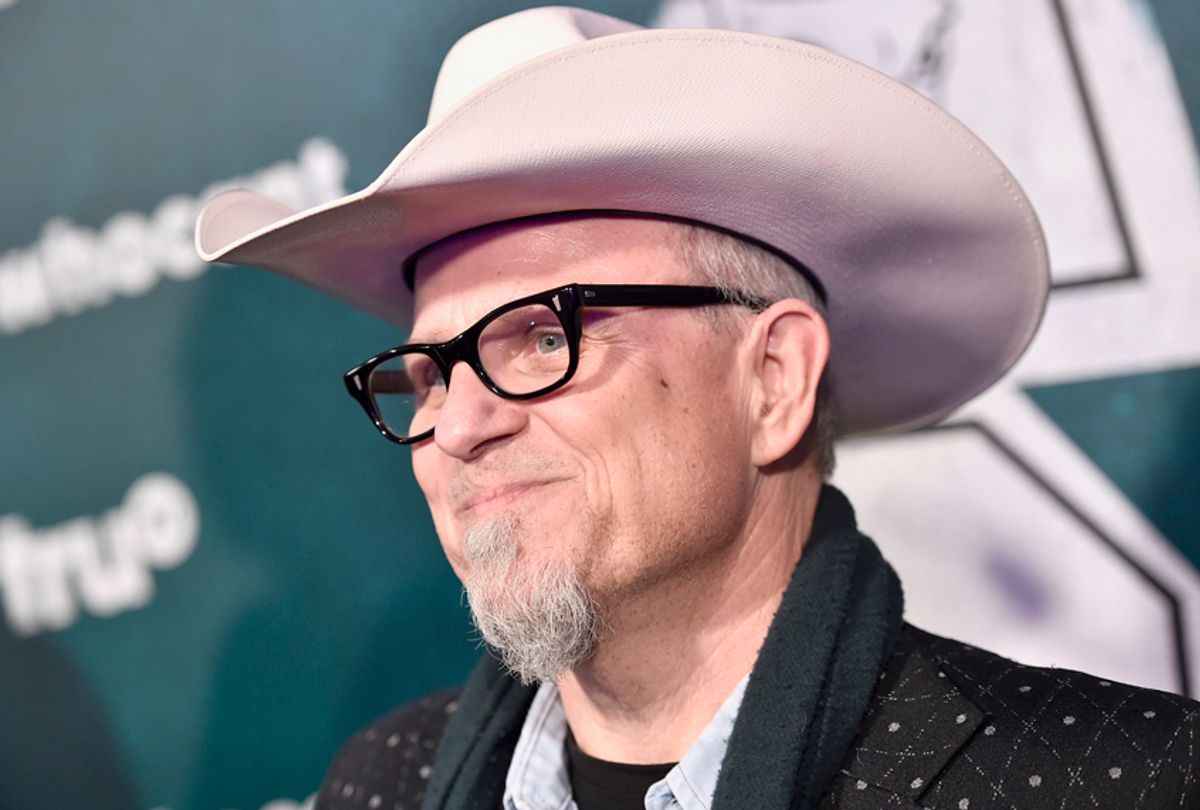 See if a scenario that plays out in Wednesday’s new episode of “Bobcat Goldthwait’s Misfits & Monsters,” airing at 10 p.m. on TruTV, sounds familiar to you. In the 1970s, a misogynistic used car salesman (David Koechner) is recruited to run for office. Cut to: a key scene, in which a political operative played by Dave Foley asks this presidential hopeful if there’s anything that he needs to worry about. In turn, the man admits to a series of moral failures that, by today’s standards, seem easy enough to spin.

After absorbing a couple of additional details and a pause, the operative shrugs. “You know? No one’s perfect.”

The episode, "Face in the Car Lot," is exactly what it appears to be, and yet, like its central monster, is something else entirely.

Sure, Goldthwait intends it to be a parody of Donald Trump’s ascent to the presidency, as he told me in a recent interview. But above all, with this episode he’s telegraphing his admiration for the more classic interpretation of the anthology genre, the type of series epitomized by “The Twilight Zone” and “Outer Limits.”

“If you're going to parody Trump,” Goldthwait observed, “you have to know that many folks are doing it, and doing it well. To do it this way, for me, felt fresh and also could hold up hopefully later on. Like with ‘The Twilight Zone,’ sometimes I go, what are they parodying here? The Red Scare here? Are they parodying racism? Whatever we decide depends on the way you see the world.”

“Misfits & Monsters,” which debuted this week, is Goldthwait’s first TV project that features his name up front and center. That’s worth noting. In the kinds of series the director admires, its creators, including Rod Serling or even Alfred Hitchcock, inserted themselves into the introduction. What stories followed had little to do with the men themselves, but they wanted to ensure their association with their programs and the body of work they represented.

Goldthwait, in contrast, typically obfuscates his involvement with his films, burying his name in the end credits.

Appropriately, the series premiere of “Misfits & Monsters," which stars Seth Green, follows an actor who voices a stuttering cartoon bear named Bubba, a character the man discovers, in the most terrifying way, is real, and resentful of how he’s portrayed and homicidal.

Goldthwait called that episode the most personal of the season. “But I didn't realize until my daughter pointed it out to me that I am just as haunted by this character I created. She's like, ‘Hey dummy, that's you.’”

Goldthwait’s personal Bubba seems to stalk him, lurking just over his shoulder. A fair portion of the people who recognize his name associate him with the persona he disposed of years ago, one created in his early career as a stand-up comedian. Back then he cloaked his stammering delivery in a high-pitched gravelly voice, an almost inhuman tone, but goofy as opposed to monstrous.

His unique style landed Goldthwait roles in films like the “Police Academy” series in addition to making him one of the most successful comedians of the 1980s and ‘90s. But like many shticks, it also limited the way people saw him.

Goldthwait came to resent it so much, in fact, that when he picked up filmmaking, he hid his director credit in order to prevent prejudgment; he saw his name as a “hump people would have to get over.”

"Most folks don't know that I've been an independent filmmaker for years," he said, before falling back into comic mode. "I've made seven movies, and my movies make hundreds and hundreds of dollars."

That said, going somewhat incognito in his work enabled Goldthwait to carve a niche as a purveyor of bizarre tales that live or die on their own merits. And that continues to be his aim with “Misfits & Monsters.”

The series arrives right on time, in an era when anthology series are popular. This wasn't the case when he initially pitched the idea. “Seven years ago I went out trying to do an anthology series and it did not go. No one wanted to do it,” he said.

But part of the reason “Misfits & Monsters” works now is because of the way the concept has been redefined within the last ten years. These days, fewer producers treat anthology TV as a vignette-driven enterprise. Instead, a number of auteurs have claimed the format’s structure as a means of playing out entire story arcs in a single pass and moving on to a completely different plot, sometimes using the same actors, in subsequent seasons.

(This also allows some networks to game the awards structure, entering these projects in miniseries categories to give them and their casts better odds of winning.)

In recent seasons, however, the pendulum has swung back to the classic definition of the anthology series largely thanks to the success of Netflix’s “Black Mirror,” not to mention Peak TV’s surge and the expansion of streaming. With so many shows to watch, the appeal of stories that start and finish within 30 minutes is understandable.

Thus the popularity of “High Maintenance” or “Room 104” on HBO, or “The Guest Book” on TBS — all shows that came to the air within the past two years (although “High Maintenance” existed as a web series prior to HBO’s acquisition).

But with the exception of “Black Mirror,” few of these shows lean into the type of subversive social commentary Serling regularly wove through “The Twilight Zone.”

Mind you, “Misfits & Monsters” appears to be a more direct descendant of ‘80s and ‘90s fright shows like “Tales from the Darkside” (which Goldthwait jokingly refers to as the “Wrangler jeans” of the genre) or “Tales from the Crypt.” Goldthwait points out the main difference is that those series, appropriate to the era in which they aired, were morality tales where the central character received some kind of comeuppance.

This isn’t his goal with "Misfits & Monsters." In fact, he intentionally wants every episode to feel unique because that’s the way he’s operated as a filmmaker.

“It'll have the odd titillating, torn-from-the-headlines episode or something, but the reality of it is, all my stories I tell, they're always different,” he said. “They're all different genres.”

In that respect, one might think of Goldthwait’s entire filmmaking career as been one long anthology series, though realized as a string of iconoclastic films reaching all the way back to 1991’s cult-favorite “Shakes the Clown.”

“There’s, you know, there’s a rom-com with a tiny bit of beastiality [2006’s “Sleeping Dogs Lie”]. There's, you know, the movie I did with Robin Williams, 'World’s Greatest Dad,' and 'God Bless America,' which is a very violent movie, I like to say, about kindness,” he said.

“So I write a lot of stories,” he continued. “The idea is that that years from now, when you watch these episodes, you might not know exactly what we're parodying. I hope that the humor and the stories have a little bit more legs than current events.”

Having said that, besides the upcoming Trump parody, one of the episodes he’s most excited to share also seems familiar.

“A very famous chimp, uh, masturbates in front of women and this female reporter tries to break the story. And men can't see it,” he said. “Obviously I scrambled to do that one. I wanted to do my take on that, because there are a fair amount of men, especially in the comedy world, that don't realize that their job right now is to shut up. And they're mad, they don't like that.

“So they pretend and they say B.S. like, ‘well, we have to listen to women!’ you know. But they're not.” Sadly, though this is very much a tale inspired by the moment, one suspects it'll still be relevant years from now.