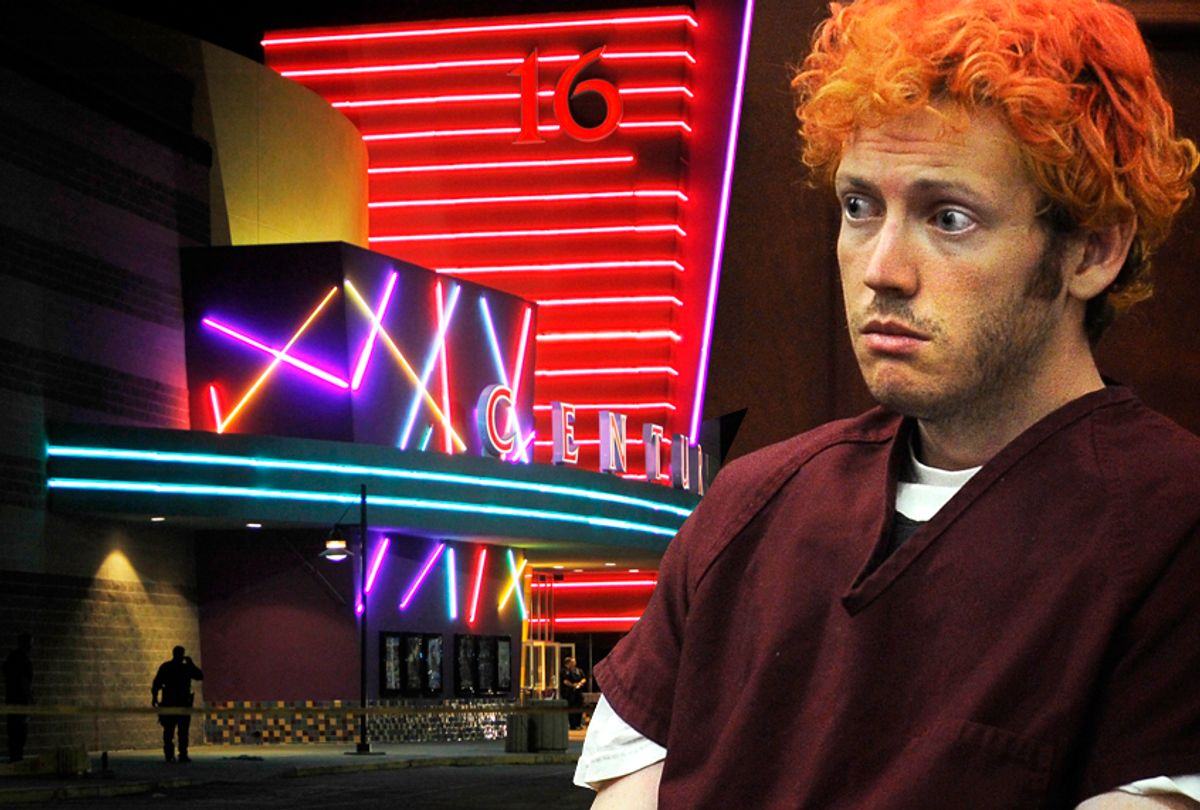 Excerpted with permission from A Dark Night in Aurora: Inside James Holmes and the Colorado Mass Shootings by Dr. William H. Reid MD MPH. Copyright 2018 by Skyhorse Publishing, Inc.

"A Dark Night in Aurora" explores the life, mind, and crime of James Holmes, who killed 12 and injured 58 in a movie theatre in Aurora, Colorado in 2012. Dr. William Reid, the forensic psychiatrist in the case, uses twenty-three hours of unredacted interview transcripts never seen by the public and his accompanying research to bring the reader inside the mind of a mass murderer. The result is chilling, gripping study of abnormal psychology and how a lovely boy named Jimmy became a killer.

Holmes drove carefully to the theater. He didn’t speed. He stopped at all the lights even though traffic was light on a Thursday just before midnight. “I was concentrating on getting to the theater without getting pulled over.” He was on his way to kill as many people as he could. I asked whether or not, if an elderly woman had walked into his path, he would have swerved. He said he would have avoided her because it would have interfered with the mission, “plus that’s kind of personal, hitting a little old lady with your car.”

When Holmes got to the Century 16, he parked his Hyundai Tiburon close to the rear exit for Auditorium 9. He got out of his car and walked around the building to the theater entrance. He didn’t stand out much; he’d left all of his ballistic clothing in the car. He wore what Holmes usually wore: informal pants and a dark T-shirt with a long-sleeved open shirt on top. His orange hair was covered by a dark knit cap.

He walked in a little after midnight. The foyer was crowded. Most of the people were there for the midnight premiere of "The Dark Knight Rises." So was he. He went up to a service kiosk, entered the transaction code from his iPhone, and got a paper ticket. It was for Auditorium 8; he hadn’t been able to get one for Auditorium 9. That didn’t matter much. No one noticed his ticket as he walked back to the concession area and then to Auditorium 9.

The previews had started; the theater was dark. Holmes went to the very front of the full auditorium, immediately took out his cell phone, and feigned a call. Witnesses said he looked like someone who had gotten a call and was politely taking it outside to avoid bothering anyone. One saw him prop the exit door open with his foot. He looked back at the auditorium as he left and saw a sea of faces lit by the light from the screen.

Holmes left the theater through an exit on the right of the screen. He carefully placed a tablecloth clip—a piece of plastic designed to secure a picnic tablecloth—on the edge of the door to keep it from closing completely. He had measured earlier to be sure the clip would fit. He had to be able to get back in and complete the mission.

Holmes got into his car and began the laborious process of putting on all the body armor in that cramped space. He managed. He had preloaded all his weapons and gotten everything ready before leaving the apartment. The car windows were heavily tinted; no one could see inside.

Early in the suiting-up process, as Holmes put earbuds into his ears, he heard a noise outside the car. It was a theater employee putting trash into a nearby dumpster. He froze. The interruption was a surprise but not a serious impediment to the mission. He had a pistol in the passenger door of his car for just such eventualities, and he was fully prepared to shoot if he was discovered. I asked if his heart was racing, his adrenaline pumping; how did he feel when he realized someone was just a few feet away? Holmes said simply, “Calm and collected.”

The man dumped the trash and went back inside, none the wiser. He didn’t die that night.

Holmes continued gearing up and then stopped again. He took out his cell phone, entered the number he had saved for the CU Hospital’s mental health hotline, and pressed SEND. It was one last chance, he said, “to see if I should turn back.” We know that he went through with the shootings, but the part of him that wanted to be, in his words, “overruled” was enough to make him dial the phone. Holmes told me that after he dialed, he “just didn’t hear anything.” Eventually, the connection ended; he’s not sure what happened. His iPhone screen read “Call Ended” after nine seconds. He is sure the number was entered accurately but didn’t hear it ring. A hotline operator later reported to investigators that she answered a call (verified as coming from Holmes’s phone) but didn’t hear anyone on the other end.

“What do you think would have happened if somebody [at the hotline] had answered?” I asked.

“What do you think?”

Sometimes getting a real answer from him was like pulling teeth.

“Told them the situation.”

“They would have tried to convince me not to.”

“Do you think they would have been successful?”

“No, I think it would have been overruled in the end.”

Could the call have made a difference? Did any part of him really want to stop what seemed to be an unstoppable course of action? I pressed further.

“How did you feel when you pressed END on the phone? What was going through your mind?”

“Just that it was really gonna happen. There was still a chance it wouldn’t when I was in my car. [Up to that moment,] I was still skeptical.”

“And when the phone call ended?” I asked.

“I’m really gonna do this.”

The last barrier to his mission had fallen.

As Holmes opened the driver’s-side car door, one of his two tear gas canisters fell onto the pavement and rolled away. He looked for it briefly, couldn’t find it, and then stepped into a sort of corridor and alcove outside the auditorium exit. The area was well lit but out of sight from the parking lot. It would have taken about fifteen seconds to walk from his car to the door, but he paused there for several minutes.

Holmes had a fantasy about the FBI stopping him. He thought, maybe hoped, that he might have been under some kind of surveillance during the past few weeks. He’d seen an FBI-marked SUV near the Byers Canyon shooting range, and sometimes there were police cars in his apartment building parking lot. He imagined that once he got out of the car with his gear and stood in the pool of light outside the exit door, the FBI would arrest him.

It didn’t happen. Nothing and no one showed up to take advantage of whatever part of him was, in his words, “still skeptical” as he donned his gear and waited to reenter the auditorium. He turned up the techno music on his iPod, adjusted his gas mask and visor, pulled open the door, and went inside.

The exit door was at an angle to the right of the screen. Only a few people noticed it opening during a quiet scene in The Dark Knight Rises, and the bulky figure that took up a position beside and just below the bright screen. Holmes had activated the metal fuse on the Clear Out tear gas canister while he was still outside the door. It made a hissing noise as he stepped inside and immediately threw it to his right, sending bright sparks and “smoke” spewing in an arc in front of the screen. Several people thought someone was playing a prank, “some idiot throwing a firecracker,” one recalled. Then he started shooting.

Holmes said that he was “on autopilot” from the time he entered the auditorium. He didn’t feel particularly exhilarated, or frightened, or cautious. He remembers being aware of the setting and people around him, but he didn’t feel the hypersensitivity to the environment that some soldiers experience in combat. He denied that the shooting was exciting or particularly rewarding for him as it occurred. Once the process began, he said, he was just carrying out a mission.

William Reid, MD, MPH, is among the most experienced forensic mental health professionals in North America. He has received both the Manfred Guttmacher Award for forensic writing and the Seymour Pollack Award for Distinguished Contribution to Education in Forensic Psychiatry, and is a past president of the American Academy of Psychiatry and the Law. Dr. Reid has written, co-authored, or edited 16 professional volumes and over 200 professional articles and book chapters, many on antisocial behavior, terrorism and forensic practice. Dr. Reid was one of two psychiatric experts retained by the presiding judge in People of the State of Colorado v. James Holmes, and the only psychiatrist allowed to record interviews with Holmes and access the unredacted videos and transcripts.