Most Americans have little savings and live one bad break away from financial ruin. TV needs more of those stories 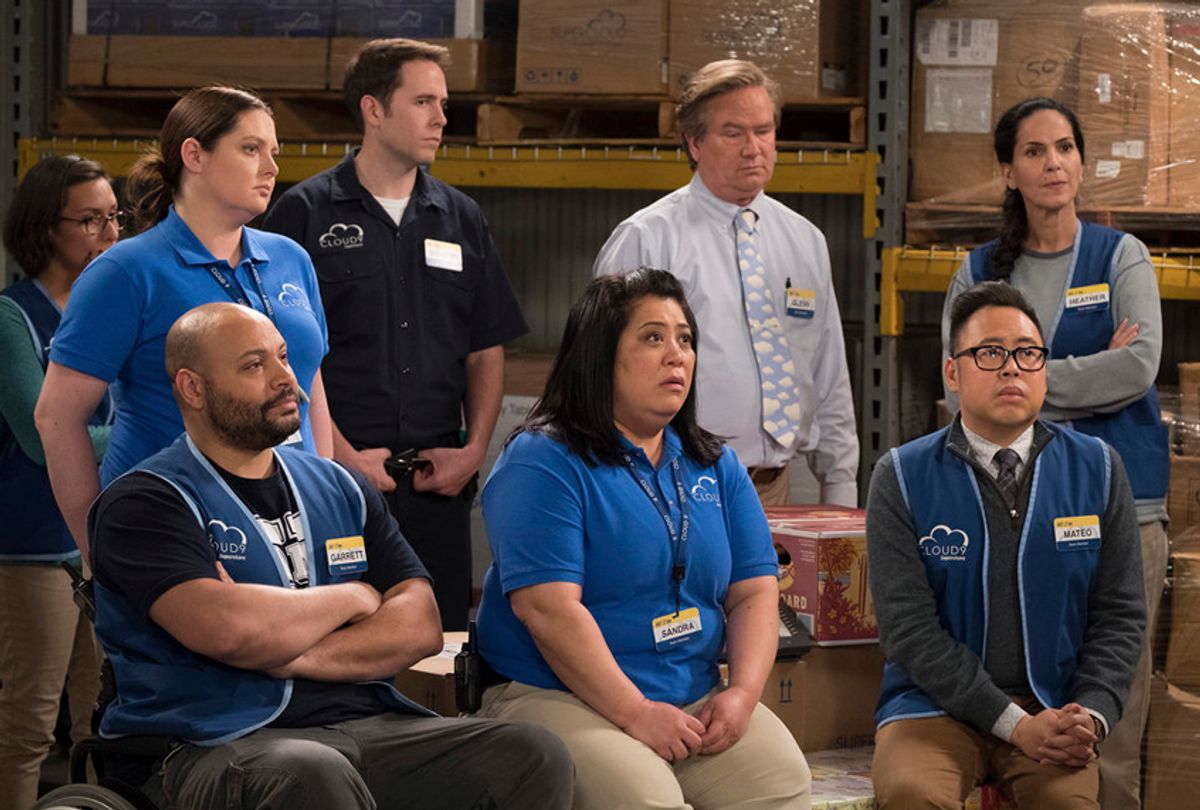 The average American walks an economic tightrope, risking collapse onto a bed of steel spikes, merely by waking up in the morning. Multiple studies coalesce to prove what CNBC recently reported: 69 percent of Americans have less than $1,000 in savings, and half of that group of desperate toilers have no savings whatsoever. An overwhelming majority of the American polity faces financial devastation in the event of even a minor crisis — a car accident or loss of employment — and that is to say nothing of the threats that trouble the sleep of anyone, rich and poor alike — a horrific health diagnosis, a severely sick child, a catastrophic injury.

American leadership, with the tacit cooperation of a passive public, has created a growth-obsessed economy in which all measurement of success, efficiency and function is attached to profit. Quality of life, and odd notions like human happiness and communal stability, cannot compete for air time against a cacophony of empty buzzwords and bromides: “job creators,” “innovation,” “economic freedom.”

Politicians and pundits will actually fire off streamers and break into a conga line if the stock market reaches “record breaking” heights, all while ignoring that 48 percent of Americans own no stock, and that the top 10 percent of income earners in the United States own 84 percent of all stocks.

Meanwhile, 21 percent of Americans have no retirement savings, and high-deductible insurance plans mean, to quote a recent Bloomberg news report, “people simply can’t afford to get sick.” Terror and frailty are the hideous realities behind the pompom waving of triumphant announcements of unemployment numbers and GDP rates.

The precarity of American life, despite acting as one of its defining features, is nearly invisible in pop culture. Politicians often have propagandistic reasons for concealing the truth, but one has to find it curious why American arts and entertainment maintain a disciplined commitment to their lack of economic realism in their portrayal of American life.

To start by crawling in search of low-hanging fruit, “reality” TV almost exclusively depicts the lives of people who can afford homes in the Hamptons, own recording studios, and use their programs to advertise myriad multimillion-dollar-generating products.

A significant aspect of televisual appeal is escapism, and human nature seems to dictate that people are always fascinated by how the “other half” lives in all of their luxury and glamour, but even if “Real Housewives of Youngstown” might not easily assimilate into Bravo’s prime time lineup, it is striking how little presentation of realism exists on reality television. The lives of most Americans do not consist of managing cocktail hours, flipping tables at Michelin-rated restaurants and showing off $250,000 engagement rings.

“The Bachelor” and “The Bachelorette” take place in fantasy worlds where courtship rituals occur in tropical mansions or on personal helicopter rides over seaside cliffs, and the other “competition” shows, such as “Shark Tank,” “America’s Got Talent,” and “American Idol,” reinforce the American illusion of instant elevation of fortune. The American dream of wealth and fame is accessible, these shows indicate with craft and sentimentality, to anyone at any time.

Working-class reality television that does exist often does not aspire to capture the humanity of its subjects as much as it attempts to provide fodder for snobbish humor. TLC’s 2012-2014 “Toddlers and Tiaras” spin-off “Here Comes Honey Boo Boo” — which has spawned its own spinoff currently airing on WEtv, “Mama June: From Not to Hot” — is an example of the condescension that passes for depiction of life near the poverty line.

The economic world of television drama and comedy is often as fictional as the stories in its scripts. On most shows about middle-class families with ordinary jobs, they live in beautiful homes and don't express a thought related to home finances. The excellent and always moving “This is Us” spotlights characters who start their own businesses, buy and renovate old apartment buildings and quit their day jobs to pursue singing careers, all without the slightest hint of difficulty.

TV Land’s “Younger” began with stories of economic strife. Newly divorced 40-year-old Liza, who had been out of the workforce raising her daughter, can't find a job in a New York publishing industry increasingly skewing toward younger applicants, so she takes advantage of her youthful beauty by posing as a 26-year-old. Currently in its fourth season, it has veered into dreamland with one of its characters — a twentysomething tattoo artist -- signing a 10-year lease for his own tattoo parlor in Brooklyn.

There are, of course, great exceptions to the rule. Aamna Mohdin recently praised Sky’s “In the Long Run” and Netflix’s “On My Block” for “demonstrating the warmth, resilience, and quirks that have long defined working-class communities.”

“Atlanta” successfully enlarges the “American dream” narrative, giving thoughtful and poignant life to a young black Princeton dropout trying to work his way to stability through managing the career of his cousin, an up-and-coming rapper.

The Showtime programs “Shameless” and “The Chi” are worthy of accolades, as is the Netflix update of the CBS series “One Day at a Time,” which revolves around a Cuban-American family; but what many of these programs have in common is that they are on premium or streaming networks. The quality and depth of writing is often much stronger, but they may have smaller audiences than the most successful standard and basic cable programming hits.

On the major networks, NBC’s “Superstore” satirizes the horrendous anti-labor policies of Walmart to score laughs with rare resonance on network television, while “Mom” on CBS has explored drug addiction, homelessness and compulsive gambling without sacrificing entertainment value.

ABC’s “Roseanne” was the most obvious contradiction to the mainstream formula, and the planned "Conners" spinoff will soon occupy the role of working-class dramedy on one of the big networks. The rapidity with which one can enumerate the exceptions to the rule, along with how easy it was for the now defunct “Roseanne” reboot to stand out in the primetime lineup, reveals the wide gap of imbalance that exists between programs about average Americans and those who benefit from the Trump tax cut.

Trulia, the real estate website, documented how even when television attempts to dramatize the lives of ordinary people, it is wildly off the economic mark. The characters of “Friends” and “Full House” could never afford to live in their respective San Francisco and New York homes, and not much has changed since the 1990s. The real-life equivalents of McMansions and condominiums where most television characters live are far outside the budget of most Americans, giving exhibition to a strange class-blindness that afflicts television writers and directors.

Many programs about people earning average incomes never include a storyline about an unpaid bill, an unforeseen financial burden, or economic anxiety. It is as if there is only one class on most of American television, and its members, including everyone from doctors to police officers, live in everlasting comfort and convenience.

Recently, a healthy debate has developed about representation of different Americans on television. Advocates for racial and religious minorities, along with LGBT communities, rightly believe that their stories are worthy of more coverage and attention in the cultural milieu of the most diverse country in the world. With staggering and dangerous rates of income inequality the subject of American political debate, arguments over representation in arts and entertainment must extend to the poor and working class, too. Anyone who believes that prosperity is a necessary element of good drama, or effective humor, has never experienced the hardship and exuberance of an ordinary life.

One of the most moving scenes in recent television history occurred during a story arc of “Friday Night Lights,” the drama centering on working-class families whose children are on the football team of a small Texas high school. The star running back, “Smash” Williams, dreams of going to college, but his single mother has no idea how they will afford his education. A sidelining injury stalls his hopes for a football scholarship. He trains, labors, and fights his way back onto the field, only to convince the coach of a Texas university of offer him a full ride. When he gives the news to his mother, they both break down in tears — embracing, crying and shouting with joy.

Jason Street, a star quarterback, does not experience such ecstasy. He suffers a spinal injury early in the first season, and comes home from the hospital a paraplegic. “Friday Night Lights” not only demonstrated the physical misery and emotional agony of paralysis, but depicted the gruesome reality of a family struggling to financially care for their disabled son. Medical bills crush their bank account, while the costs of making their small house disabled-accessible escalate.

With few programs as honest and effectual as “Friday Night Lights,” television is emblematic of the economic ignorance that defines too much of American entertainment. There are more big-budget films about superheroes than there are about working families, and popular music no longer tells the story, in all its quiet heroism and heartbreak, of average American life.

As the cost of living continues to become more onerous, even torturous, for millions of Americans, our culture will appear more and more bizarre and oblivious if it continues to transform into one endless episode of “Lifestyles of the Rich and Famous.”