"Robin Williams: Come Inside My Mind": 10 things we learned from new doc 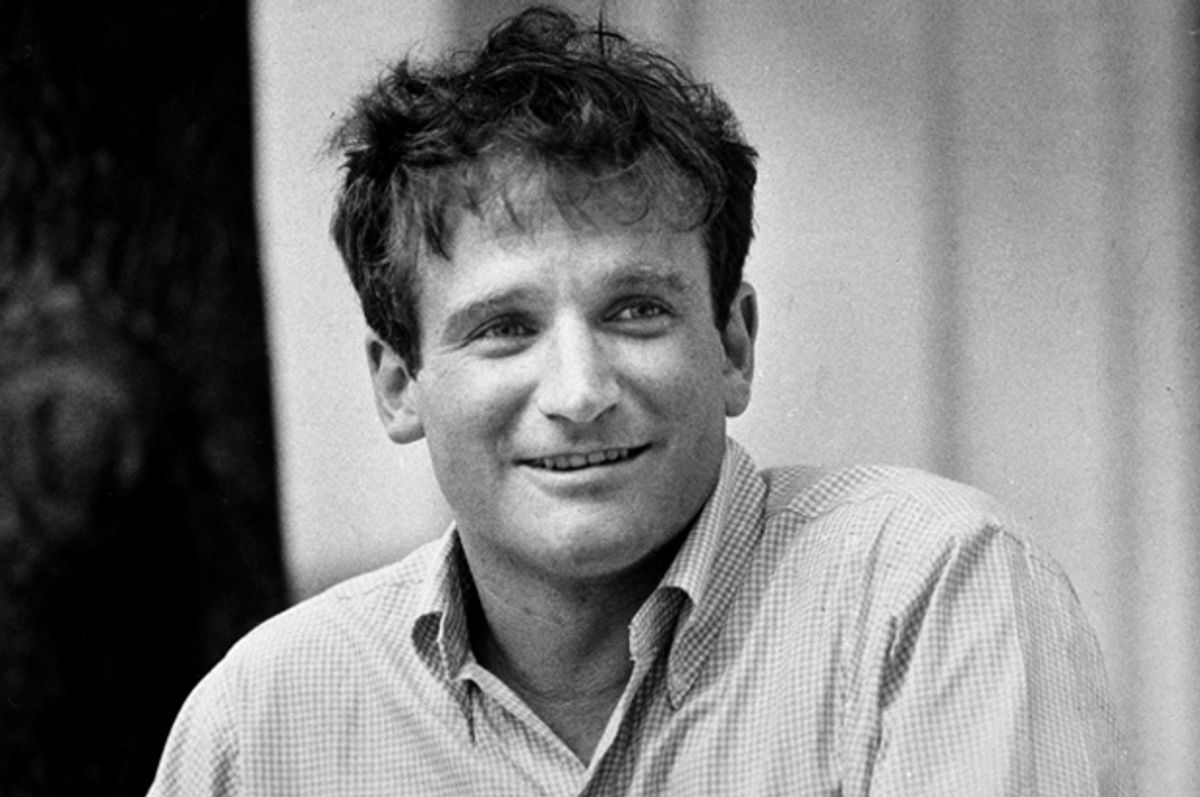 "Robin Williams: Come Inside My Mind" seesaws between hilarity and melancholy as it tracks the rise of one of the great American comics. Williams committed suicide in 2014, and the central question running through Marina Zenovich’s documentary is: How could a man who made so many others so happy be battling unknowable sadness? “Every person is driven by some deep, deep, deep, deep secret,” Williams says at one point. To get at that secret, Zenovich, who’s previously helmed documentaries about Richard Pryor and Roman Polanski, talked to many of Williams’ peers and pals — including David Letterman, Billy Crystal and Steve Martin — along with the comedian’s family members and his first wife, Valerie Velardi. Here, 10 takeaways from "Come Inside My Mind."

Comedy was an addiction for Williams

Williams publicly struggled with alcohol and cocaine dependence. But "Come Inside My Mind" suggests that his all-out commitment to comedy was a form of addiction as well. “It was vital for him to have an audience,” Eric Idle says. “He was hilarious, but it was a need.”

“It’s a very powerful thing for a lot of comedians — that laugh is a drug,” adds Billy Crystal. “That acceptance, that thrill, is really hard to replace with anything else.”

Mark Romanek, who directed Williams in "One Hour Photo," remembers how the comedian’s need for laughs impacted him on set. “The urge to be funny . . . was so innate, almost like breathing for him, that if he didn’t get that out of his system, it would have affected his performance in a bad way,” Romanek says. “I realized when he made people laugh that hard, he used to kind of get high from it, an endorphin rush or something. If he was being really funny one second before the take. . . he almost had this glow of joy, even though he’s playing a serious scene, which also gave this patina of weirdness to the performance.”

Williams was with Belushi at Chateau Marmont in Los Angeles the night before the "Animal House" star overdosed in March of 1982. As news of Belushi’s death spread on the set of Williams’ show "Mork & Mindy" the next day, his co-star, Pam Dawber, confronted him about his own substance abuse, issuing a (somewhat confusing) warning: “If that [overdosing] ever happens to you, I will find you and kill you first.”

“Here’s this guy who’s a beast, who could do anything, and he’s gone,” Williams remembered. “That sobered the shit out of me.” Howard Storm, who directed episodes of "Mork & Mindy," noticed a difference. Williams used to roll onto set after spending all night partying; after Belushi died, “he backed off for a while, he cleaned up.”

"Mork & Mindy" was cancelled a few months later. Williams left L.A. with his wife and moved to Northern California, removing himself somewhat from the party scene.

After roughly 20 years of sobriety, Williams relapsed in 2005

"Come Inside My Mind" implies that alcohol functioned as a coping strategy for Williams. “He felt that when he wasn’t [making people laugh], he was not succeeding as a person,” Robin’s son Zak says. “That was always hard to see.” After decades away from booze, Williams began to drink again on the set of "The Big White." “I started drinking a tiny little bottle of Jack Daniels, like the ones you get on an airplane,” he says. “Then a week later I was hiding a big bottle of Jack Daniels.”

“At the bar each night, before close, I’d have a couple glasses of wine,” remembers Lewis Black, who also acted in "The Big White." “Robin would come down and have a tequila and an espresso. He said to me, ‘I think I have a problem.’” Williams went to rehab in 2006.

David Letterman and other rising comics in L.A. were initially thrown off by Williams

Williams’ out-there style on stage could be bewildering at the outset. “I moved from Indiana and went immediately to the Comedy Store,” Letterman remembers. “When we first saw Robin on stage, we were skeptical. We made it kind of a project to keep our eye on him.”

Skepticism quickly turned to admiration. “In my head, my first sight of him was he could fly,” Letterman continues. “Because of his energy, it was like observing an experiment. All I could really do was hang on the microphone for dear life. Here was a guy who could levitate. We knew that whatever it was Robin was doing, we weren’t gonna get close to that, and we were frightened that, ‘Oh my, maybe we’ve come out here at exactly the wrong time, when everything was changing, and all we had was our stupid little jokes.'”

“In 1977, Star Wars came out, and I stopped watching 'Happy Days,'” explains Scott Marshall, whose father Garry created the show. “My dad said, ‘Why don’t you want to watch 'Happy Days' anymore?’ I said, ‘There’s no spacemen on it.’ He went to the writers’ room on 'Happy Days' and said, ‘Scotty wants a spaceman.’”

The writers set about dutifully creating the part of a spaceman, Mork from Ork. But who would play the role? “My aunt, who was in charge of casting, told my dad about a comedian doing stand-up on the street corner with a hat that people put money in,” Marshall continues. “My dad said, ‘You want me to hire a kid who stands on the street corner with a hat, on a primetime network television show? A hit show?’ . . . She said, ‘It’s a pretty full hat.’” That comedian was Williams, and his Mork tested so well with audiences that he was given a spin-off, "Mork & Mindy," that became a hit.

Williams hit the "Mork & Mindy" set with irrepressible energy that in the beginning proved challenging to translate to the screen. “He would run around and do crazy things all the time,” Marshall says. “There were union cameramen. He would do something great and my dad would go, ‘Did you get that?’ The camera man would say, ‘He didn’t come by here.’ [My dad would respond,] ‘You gotta capture that, he’s such a genius!’ The cameraman would say, ‘If he’s such a genius, he could hit his mark.’”

“The sitcom, up until then, was always three cameras,” Marshall continues. “[Garry] brought in a fourth camera, kind of a handheld camera, just to follow Robin. That became the standard — every sitcom has four cameras now because of that.”

Williams was known for his on-screen zaniness, but surprisingly, the comedian grew up in a very reserved household in the affluent Detroit suburb of Bloomfield Hills, Michigan. “I was so fucking quiet,” Williams says. “My father was very intense, he was always on the road working for Ford Motor Company. I was an only child raised by basically the maid for a long time.”

Williams wasn’t exposed to much comedy, but one experience showed him that jokes could be a way to connect with his father by breaking through his cold veneer. “I saw my father watching "The Tonight Show" with Jonathan Winters,” Williams continues. “My dad was a sweet man but not an easy laugh. My dad lost it, and I went, ‘Who is this guy who made the great white father laugh?’”

Williams was a serious thespian who trained with the greats

Williams studied at Juilliard with John Houseman, an Academy Award-winning actor known for his work with Orson Welles. The comedian describes it as “this incredible English training in America — attention on a different level . . . getting this great set of tools that we could work with.” Houseman, like Williams’ father, was not quick to crack up, but Williams managed to get him to chuckle at a piece of physical comedy. “Buddha laughed!” Williams remembers.

After finishing the rigorous program at Juilliard, Williams pivoted in the opposite direction, throwing himself into the wonderfully messy world of improvisational comedy. “I started to be able to do comedy based on suggestions, which was this idea of, wait a minute, you’re creating it, and that was addictive,” Williams says. “It was like sex without the guilt.”

Williams’ philosophy of acting: Get out of your own way

“I don’t know the great secrets of acting,” Williams says in "Come Inside My Mind." “It’s like some sort of Zen concept where you say, ‘What you think is acting, don’t do that anymore,’ and stop. If you just relax, listen, be in the scene, you don’t have to worry about finding the funny line or acting. If you just don’t interfere with yourself, you’re quite interesting. People will register your thoughts and pick up on what you’re going through because your face is accessible. You’ll be in character and the audience will be following along. The most important thing is for the audience to follow a character through. Don’t do anything, and you’ll be amazed how much you’re doing.”

Williams was frightened by his dementia diagnosis

Most of Williams’ friends remember him as relentlessly upbeat. But Crystal noticed a change in Williams late in his life. “We met at a movie theater; I was a little concerned because I felt he was very quiet,” Crystal says. “When we left each other, he started to cry. I said, ‘What’s the matter?’ He said, ‘I’m so happy to see you.’ Then he told me he had been diagnosed with Parkinson’s. And when he told me, I never heard Robin be afraid, except for that moment.”

Following Williams’ death by suicide in 2014, his widow, Susan Schneider Williams, published an essay recounting her husband’s struggles with a form of dementia known as Lewy Body Disease (LBD). “Robin was losing his mind and he was aware of it,” she wrote. “Can you imagine the pain he felt as he experienced himself disintegrating?”