Voters have often turned to Republicans because they were "strong on defense." That all looks different now 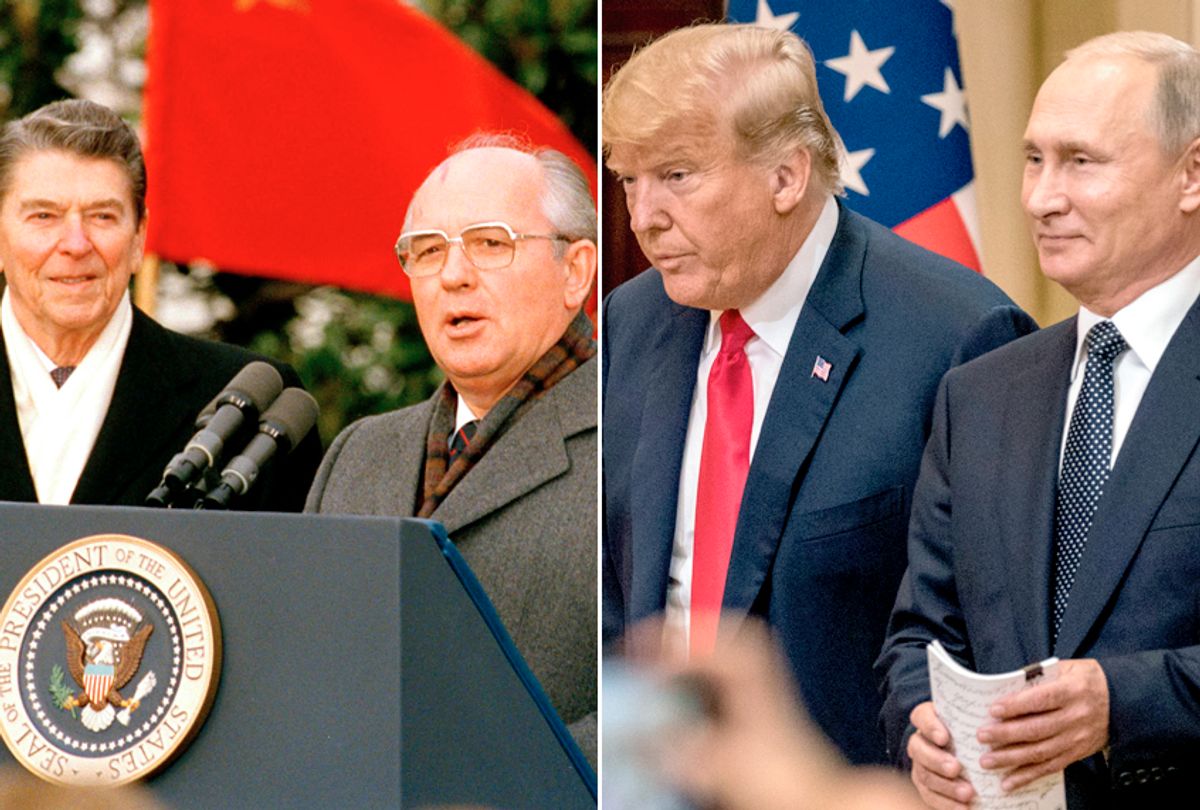 Brett Kavanaugh grew up in a mixed household: His father was a Republican and his mother was a Democrat. But as a teenager, Kavanaugh turned to the GOP. According to recent news reports, President Trump’s latest Supreme Court nominee was inspired by Ronald Reagan’s stance on national security.

The rest, as they say, is history. Reagan swept into the White House in 1980 as a tough-on-defense father figure, pledging to protect America from its enemies. Democrats have been playing defense on national defense ever since. Voters view them as the “Mommy Party,” who take care of things at home. But if you want a strong Daddy who will protect you from outside intruders, you choose the GOP.

That could be changing. Under Trump, Republicans have shown themselves to be weak on defense. And that provides a great opening for Democrats, if they play their cards right.

Here are the facts: In 2016, Russians invaded America. They didn’t do it with bombs or guns; they did it with computers. And they struck at the most essential element of our democracy: our elections.

How has our commander in chief responded? By shrugging his shoulders. Last week special counsel Robert Mueller indicted 12 Russian spies for interfering with the election, and Trump once again called the investigation a "witch hunt.” And he restated the same mantra he has used since 2016: there was “no collusion” (in Trump's Twitterese, “NO COLLUSION”) between his campaign and the Russians.

It’s important for Democrats not to take Trump’s bait. The question of whether Trump colluded with Russia is one for Mueller to determine; indeed, it’s a central part of his probe. We undermine his efforts when we make unfounded statements on that subject, before we know what evidence Mueller has actually found.

We also play directly into the hands of Donald Trump, who — being Donald Trump — is trying to make the story about himself. Of course it matters whether he or his operatives were involved. But even if they weren’t, our country, and our democracy, were attacked. And Trump has done nothing to protect us.

To the contrary, he has emboldened the enemy who attacked us. He stood expressionless next to Russian President Vladimir Putin at their now-infamous joint press conference on Monday, after their summit in Helsinki, while Putin brazenly lied about Russian interference in our elections. Trump later said that Putin was “extremely strong and powerful in his denial” of the attack, which made it seem like a theory rather than a fact. Then Trump repeated his claim that there was “zero collusion,” which again diverts us from the attack itself.

Most remarkably, perhaps, Putin echoed Trump by claiming that the collusion charge was “utter nonsense.” He also offered to let the Mueller team interview the indicted spies, which once more cast doubt on Russian interference. Trump, meanwhile, praised Putin's proposal as an "incredible offer."

The contrast to Ronald Reagan couldn’t be sharper. Reagan didn’t heap praise on the Soviet Union, as Trump has done with Putin. Instead, he famously described the USSR as an “Evil Empire.” During his first term, Reagan said that the Soviet Union was led by men who would “lie, cheat and steal” to achieve their ends. And he charged that illegal Soviet activity “underlies all the unrest that is going on” around the world.

Reagan’s anti-Soviet rhetoric cooled in his second term, when Mikhail Gorbachev came to power in the Soviet Union. Eventually, Reagan and Gorbachev signed a deal to remove all intermediate-range nuclear-tipped missiles from Europe.

Since then, historians have debated whether Reagan’s anti-Soviet stance — and his huge military buildup — were the key factors in the deal, or whether internal developments in the Soviet Union drove it. But there’s no question that Americans supported Reagan’s actions, in overwhelming numbers. By the end of his presidency, 72 percent of the country voiced strong approval for his conduct of foreign policy.

That’s what brought a young Brett Kavanaugh -- and millions of other voters -- into the GOP camp. At least some of them can be persuaded to defect to the Democrats, now that Trump has turned his back on Reagan's legacy. How can you vote for Daddy's party, if he won't even admit that your house is under attack?

To be fair, several prominent Republicans denounced Trump's Helsinki comments and firmly condemned Russian interference. But Trump hasn't, and he's the leader of the party. He has hemmed and hawed since the Helsinki summit, reluctantly acknowledging that Russians may have hacked our election but refusing to say that Putin lied about it. That tars the entire GOP with weakness.

This gives Democrats a historic chance to seize the defense issue, after four decades of losing on it. Barack Obama was still president when Russia attacked, and he didn't sit on his hands. He took Putin aside at an international meeting and told him to stop interfering in our election. He also imposed punitive measures, ejecting several Russian "diplomats" -- spies, really -- from the United States.

Finally, the Obama administration asked congressional leaders to sign a statement condemning Russia for attacking us. And guess what? Democrats agreed to do so, but Republicans dragged their heels. That's why there was no public statement from Congress until October 2016, which might have been too late.

So let's stop talking about collusion, or even about whether Russian interference swung the election to Trump. Such claims bear an ironic echo of Trump himself, who is famous for speaking before he knows what he's talking about.

What we do know, beyond any doubt, is that a foreign enemy attacked us and that our own president stood on a world stage and dissembled about it. Taking a page from Ronald Reagan, the Democrats should ask a simple question: Do you feel safer than you did two years ago? And who's your daddy now?

How the GOP defaulted to hate and bigotry