The rescued Thai boys are considering becoming monks — here’s why

In the wake of the rescue efforts, the act is not surprising 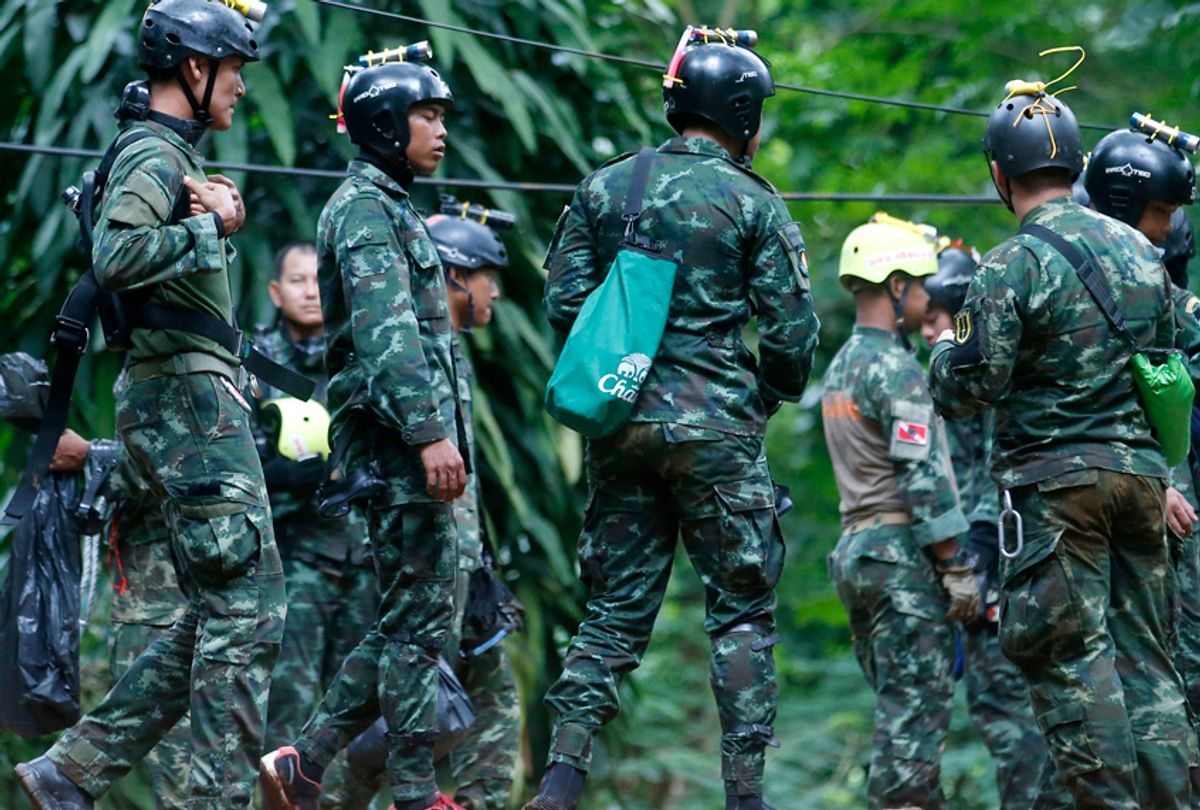 Thai rescuers prepare to enter the cave where 12 boys and their soccer coach have been trapped since June 23, in Mae Sai, Chiang Rai province, in northern Thailand Friday, July 6, 2018. (AP/Sakchai Lalit)
--

After their dramatic rescue from Nang Non cave, 12 Thai boys and their soccer coach are mourning the loss of a Thai Navy SEAL, Saman Gunan, who died during the rescue efforts. The father of one of the boys said that in order to pay tribute to the Navy SEAL, many boys are considering temporarily becoming monks.

Ordaining as a full monk — known as “bhikkhu” in Pali, the religious language of the Theravada Buddhism — is only available to men over 20. The boys would instead be ordained as novices, or “nen,” who undergo fewer restrictions. Additionally, at least one of the boys is Christian, and would likely not be ordained as a monk.

But in the wake of the rescue efforts, the act of ordaining is not surprising. In Theravada Buddhist practice, ordaining to be a monk and donating the merit thus gained is one of the greatest honors that a person can give to another.

Monks in Southeast Asia, with their saffron robes and shaven heads, are iconic. They can be seen on the roadside with alms bowls, accepting handfuls of rice from villagers in early morning processions, or gathered in the evenings chanting Pali scriptures in the Buddhist temples that lie at the heart of most Thai villages. In my own research, I spent hours talking with monks — from abbots of major temples to those who had been ordained for a short period.

I also met monks engaged in “magical” activities such as healing, to those who saw their role as scholars. My first impression, like that of many travelers, was of a group of men seeking enlightenment through isolation from the world.

Indeed, this isolation is at the core of Buddhist teachings. For Buddhists, worldly desires lead to suffering. Therefore, cessation of desires can lead to happiness and eventually enlightenment.

But monks are not a homogeneous group. Buddhists join the monkhood — the sangha — for many different reasons, only some of which are related to achieving transcendence and enlightenment. While some may choose to remain monks for their entire lives, most Buddhists ordain for a limited period. Thai Buddhists with whom I’ve worked have ordained for a few months during childhood, for the length of the rainy season, or even just for a day before undertaking a dangerous journey or following the death of a parent.

Buddhism, as it is practiced in Thailand, addresses many worldly needs. It takes into consideration the lives of people who are not necessarily ready to renounce the world quite yet.

Before the advent of government-run schools in the late 19th century, the Buddhist temple was the key institution for the education of young boys in Thailand. Boys as young as 5 entered the temple to learn to read and write, and to study the basics of Buddhism.

When Theravada came to Southeast Asia from India in the second millennium A.D., replacing local versions of Hinduism and Mahayana Buddhism, this religious focus on promoting education within the village was revolutionary, as it became a central part of village life.

Theravada was focused not on the trappings of kingship and rule, but on serving communities. The temple in the center of the village served as the school, fairgrounds, hostel and welfare office in addition to its role as a religious center.

Today, this role of educating Thai boys has largely been replaced by government-run schools. This transition has allowed for the education of girls.

But some Buddhist schools remain, especially in Thailand’s North, that keep a focus on mostly men’s religious education. They teach the local Northern Thai script (distinct from Central Thai and largely fallen out of use) in addition to the religious languages of Pali and Sanskrit.

But education is not the only reason to seek to be ordained.

Most Thai men get ordained in order to make merit — known as “tham bun.” Devoting oneself to the study of the Buddha’s teachings, the dharma, is one of the most holy acts that one can do. Buddhists who get ordained are believed to acquire a great deal of bun, or merit.

For Buddhists, this life is but one in a cycle of deaths and rebirths, where the good deeds one does in the past determine where and in what form — human, animal, divine being — one is reborn. Eventually, over many lifetimes, enough knowledge and merit will allow for escape from this cycle and transcendence.

But as anthropologist Lucien Hanks described, in Thai religious system, practitioners can donate and receive merit from others. Normally, the recipient of the merit are parents. It is a way to thank them for their sacrifices.

In the case of the 12 boys and their coach, however, they are offering the merit they will make to Officer Saman, in order to ensure a better rebirth in his next life.

The obligation of a debt

Like many languages, Thai has certain concepts that do not translate well into English. One of these, “krengjai,” refers to the feeling of obligation toward someone who has given a gift too great to repay. It is a heavy feeling.

For observers, it is easy to imagine the gratitude that the boys must feel to Officer Saman, but it is just as easy to overlook the sense of responsibility that must weigh on the boys as well. As the classic anthropological theorist Marcel Mauss pointed out, gifts come with obligations, and the sacrifice of a life is no different.

In this way, the boys are likely becoming monks not to reflect upon their own fate or experience in the cave. Rather, they are doing this to repay Saman’s sacrifice with the greatest gift that they can offer.