The sudden, gruesome opening of "Jaws" 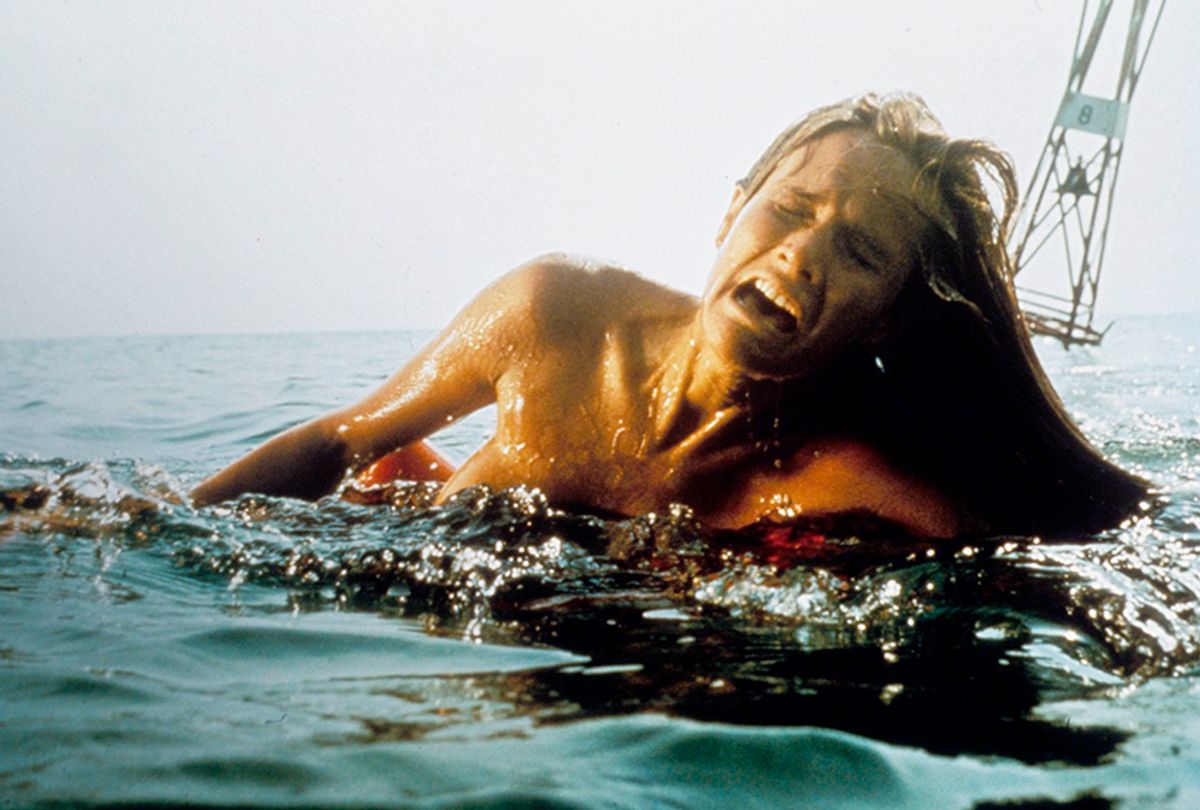 Excerpted from "Jaws" © Antonia Quirke (2002). Reprinted with kind permission of the author, the British Film Institute and Bloomsbury Publishing.

Before you know it, before you expect it, there’s a sound. The screen is dark, giving us time to settle down, that private second before it all begins. But there’s a sound, and we have to listen.

It’s the sound of marine life. A whale, perhaps? Dolphins. Sonar. At first it seems to reflect us. Sea-babble to accompany audience-babble, the sea version of the chatter of the cinema audience finding seats and taking off coats and finishing arguments and keeping an eye out for latecomers. But really it’s the sound of a sea orchestra tuning up, waiting for the soloist. The shark. 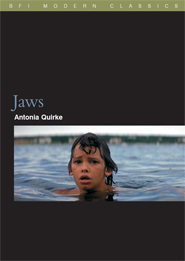 As soon as he starts playing, the blather is silenced, on screen and off. He moves through the water – this tuba, this double bass, this far end of the piano – with a roving eye. He’s at the bottom of the sea, brushing through kelp forests, like a convict escaping through some strange field. John Williams’ theme is at once serious and comical, solemn and skittish, building until it’s almost a refrain from West Side Story – that scene at the dance when the Jets and the Sharks circle each other with crouching daring, sure that everything to come is going to be heroic and mutinous and fun. But it’s over very quickly.

The break of rhythm in the credits is so unusual, a jump-cut, and the next wail we hear comes very much from the land, from a harmonica played badly round a beach fire. It is night. Someone else is playing the guitar. You know this group of people are not really hippies – they’re smoking cigarettes rather than roll-ups, and there’s something about their hair that suggests it can be made to look neat for the country club.

Any one of these kids could be Steven Spielberg. Before he made "Jaws," he’d sit on the beach in LA watching Brian De Palma and Paul Schrader and the rest of that gang as they felt up each other’s girlfriends, did a line, got in a mess. He knew it wasn’t for him, that he wasn’t curious like that. And he was suspicious of the kind of person who pretended to be.

Eight years earlier Spielberg had made a card-calling short "Amblin'" which was all about a guy who chased a free-spirited girl across southern California en route to the Pacific coast. Just a preppy slumming it for a week or two, a poser with mouth wash and loo roll secreted in his backpack. The blonde man that the camera now finds on the "Jaws" beach, sloshed in a mumsy jumper, is rather like that character. He’s sitting with his back against the fire looking at the blonde girl in the shadows near the fence.

She seems to be the real thing, her eyes properly bright. She’s clearly not one of this gang, this summer seascape family. She’s not sheltering by the cozy fire, not swigging from a can. She keeps her little tasselled bag at her feet like someone used to making a quick getaway, someone who leaves nothing behind. The two blondes run down to the sea. Her voice is childish. She says her name. Chrissie. He’s having trouble taking off his clothes (good cords, a good shirt) but she’s naked in seconds (clothes? disposable!) and in the water. You wonder if Chrissie is a conventional siren, luring this mummy’s boy to a watery death, but what’s the worry? You don’t care for him much.

Suddenly, our anxiety switches on. Chrissie is shown at a distance, making her leg disappear into the water like a gentle periscope. It’s so Bond girl. As are the first shots of her from beneath – a mermaid gliding and tumbling to a new Williams theme, a harp in ecstasy, tumescent and hallucinatory.

Back on the beach mummy’s boy collapses saying: "I can swim. Just can’t walk, or dress myself." He might be speaking for the shark, who now watches this girl as she floats, bright against the moonlight. But it could be day. She’s a sun-ray to the eyes of one who spends his life hidden in a one-windowed pit. His is an ancient gaze of longing and envy. He wants her and her medium. He wants to break out of his psychopathic haze and capture the world of health and air and brown limbs and thick golden hair. If she were wearing a skirt he’d look up it now, because he’s powerless, a dirty little beast, a Humbert Humbert who fears this particular Dolores might "explode in screams if I touched her with any part of my wretchedness."

As the shark moves in on Chrissie it’s almost as though he’s stepping in, knowing she’s been let down by a lover, tapping on her foot, trying to be gallant. But she won’t go down to him willingly. You notice her earrings. Silver hoops. They surprise you, remind you that she is human. Not a siren come from a coral cave to bewitch a sailor. Not a mermaid who belongs to the sea. She’s a bold girl wearing nothing but a pair of silver hoops, looking mildly humorous and intent, waiting for some college kid to finally get his kit off, brave the waves, and kiss her. That’s why her death is unconventionally protracted, longer than your average screen murder.

Chrissie turns her secret suitor down and suffers something as long as a screen rape. You wonder if the shark is under the impression she’s enjoying it, because he takes his time, takes her for a ride. Literally. She is swept along to the right and then to the left, the graceful curve of her wet shoulders the only thing that’s visible. For a second she turns her head to look down, like someone hoping to emerge out of the sea on someone’s shoulders, having taken part in nothing more than a cruel play-fight.

The shark even gives her (and us) a moment’s break, a mini interval, allowing Chrissie to hold on to a buoy, to catch her breath, to shiver. We know that she’s praying and sobbing, but the shark doesn’t. He isn’t listening. He can’t perceive what happens above the surface. Chrissie’s death is the perfect metaphor for casual sex – a communication breakdown between above and below, mental and physical.

When she’s gone the music stops, and there’s nothing but the sound of the sea and the buoy, which doesn’t so much give our guts time to settle down, as leave us incontrovertibly aware of the mute act of witnessing.

What’s next? Where to now? Should we giggle? The still-dressed blonde guy lies prone in the surf. He burps.

Rob Reiner on why neither party works today