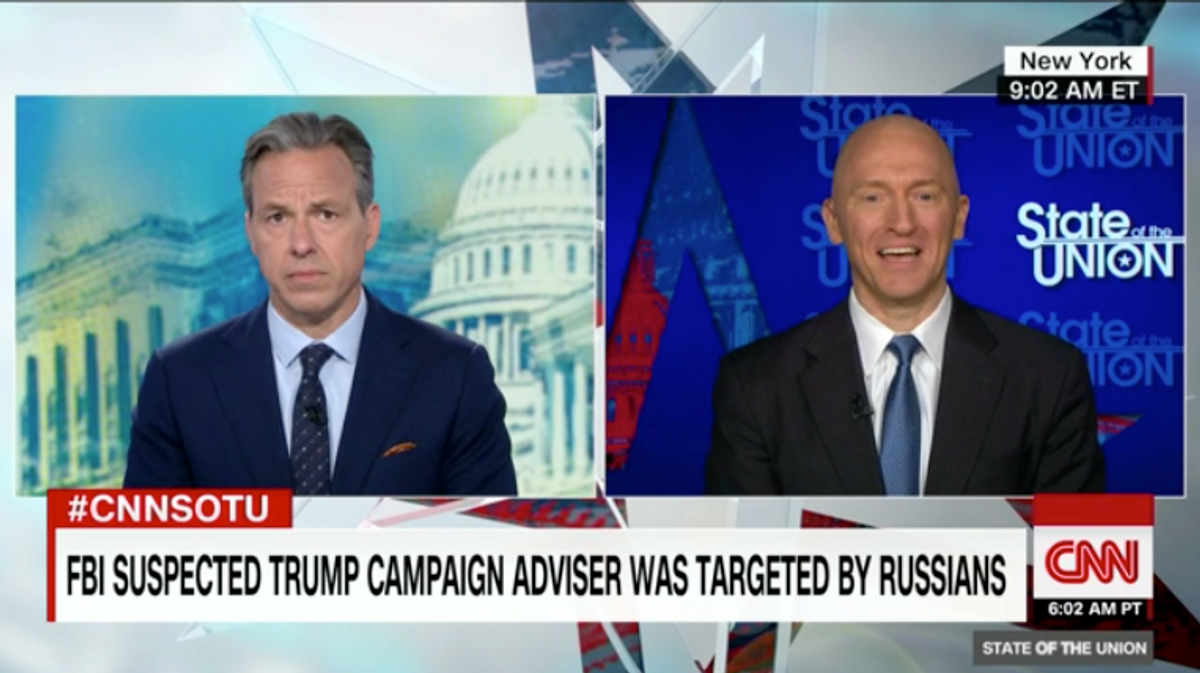 On Saturday, the FBI released several redacted documents related to the wiretapping of former Trump campaign adviser Carter Page, in which it was alleged he acted as an "agent of a foreign power."

In an interview on Sunday, Page responded to the accusations against him by downplaying them as a "spin" and calling them "ridiculous."

"This is so ridiculous it’s just beyond words," Page told CNN's Jake Tapper. "I’ve never been an agent of a foreign power by any stretch of the imagination."

He added, "It's literally a complete joke."

When directly asked if he ever advised the Kremlin, Page admitted that he attended the 2013 G-20 Summit in Russia and just prior to the summit he "might have participated in a few meetings that a lot of people, including people from the Obama administration, were sitting in on."

"It’s really spin. I mean, I sat in on some meetings," Page explained. "But to call me an adviser, I think, is way over the top."

Tapper then read from a 2013 letter written by Page in which he said, "Over the past half-year I have had the privilege to serve as an informal adviser to the staff of the Kremlin in preparation for the presidency of the G-20 Summit next month."

"This is really nothing. Just an attempt to distract from the real crimes that are shown in this misleading document," Page said.

Page's bizarre television interview comes only a day after the FBI released redacted versions of the top-secret Foreign Intelligence Surveillance warrant application from October 2016, and its numerous renewals thereafter. The documents were disclosed by the Trump administration on Saturday after the New York Times and other news organizations obtained the documents through Freedom of Information Act lawsuits.

"This application targets Carter Page," the document read. "The FBI believes Page has been the subject of targeted recruitment by the Russian government."

One line in particular, which started off redacted, finished with, "undermine and influence the outcome of the 2016 U.S. presidential election in violation of U.S. criminal law. Mr. Page is a former foreign policy adviser to a candidate for U.S. president."

For months Republicans of the House Intelligence Committee led by California Rep. Devin Nunes have railed against Democrats and the FBI, and have claimed that Page's FISA warrant was unlawfully obtained. House Republicans repeatedly asserted that the FBI relied on the dossier authored by former MI6 spy Christopher Steele.

The application shows that the F.B.I. told the court it believed that the person who hired Mr. Steele was looking for dirt to discredit Mr. Trump. But it added that based on Mr. Steele’s previous reporting history with the F.B.I., in which he had “provided reliable information,” the bureau believed his information cited in the application “to be credible.”

Meanwhile, President Donald Trump has tweeted endlessly about the ongoing Russia investigation, something he has dubbed the "Rigged Witch Hunt" against him.