Carter Page and the FISA conspiracy theory: Trump's back to claiming it's all a "hoax" 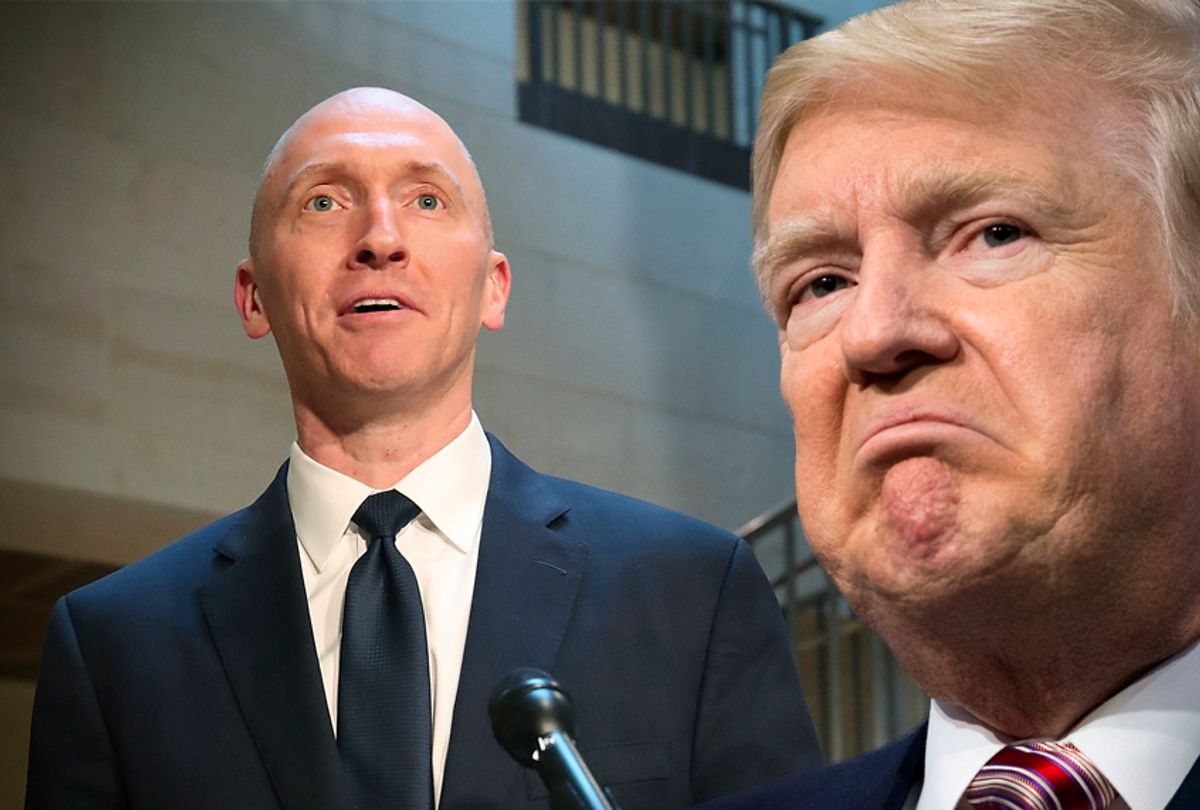 Late on Saturday night, the U.S. government released a trove of documents pertaining to the warrant obtained under the Foreign Intelligence Surveillance Act, or FISA, against Carter Page, the suspected Russian asset and former Trump adviser. This release was highly unusual. In fact, it was unprecedented. These were unclassified more or less by accident when President Trump unilaterally declassified the notorious "Nunes memo," leaving the door open for the Freedom of Information Act request that led to this release of the underlying documents on which it was based.

For those following the right-wing "deep state" conspiracy, this was a big moment. House Intelligence Committee chair Devin Nunes, R-Calif., and his henchmen had charged that the FBI used the controversial Steele dossier as the evidence to get a warrant for surveillance of Page during the presidential campaign. Their conspiracy theory is that the dossier is a partisan hit job and that the FBI failed to reveal that to the FISA judges; therefore, the entire investigation into campaign interference in the 2016 election is discredited.

These documents do not prove their case. It's hard to judge specifically what evidence was presented because of the heavy redactions, but one can still discern that the request was not solely based on the dossier and that the FBI did not conceal the fact that the dossier had been paid for by an opposing party. Steele had been viewed as a reliable informant in the past, but there was plenty of evidence from other sources. Indeed, Page had been on the FBI's radar for several years as a possible Russian asset, and when he started buzzing around a presidential campaign it naturally attracted the bureau's notice. In the documents, Page is described as possibly “collaborating and conspiring with the Russian government.”

The FBI did not apply for permission to start surveillance until after Page had left the Trump campaign, and four successive Republican-appointed FISA judges signed off on the warrant. There are plenty of reasons for civil libertarians to be suspicious of the FISA process, but this does not seem to be a case that merits it. A man long suspected of having been recruited by a foreign government was suddenly named as an adviser to a presidential campaign. The FBI would have been derelict in its duty if they hadn't looked into it.

In a sane political world, Nunes would be facing a world of hurt following the release of these documents, and the president would also be facing serious political fallout for endorsing Nunes' crude defense. We do not live in a sane world. This is what Trump tweeted when the documents were released:

Yes, after having to choke out last week that the Russians did indeed interfere in the election, the president wound up his Twitter tirade by once again saying that it's all a big hoax -- and we're right back where we started.

Charlie Savage of the New York Times explained it this way:

Mr. Trump’s portrayal, which came as the administration is trying to repair the damage from his widely criticized meeting with President Vladimir V. Putin of Russia, revived the claims put forward in February by Republicans on the House Intelligence Committee. But in respect after respect, the newly disclosed documents instead corroborated rebuttals by Democrats on the panel who had seen the top-secret materials and accused Republicans of mischaracterizing them to protect the president.

It doesn't seem to matter. Page himself appeared on CNN on Sunday with a crazed smile on his face, claiming that the whole thing is "spin" and that none of it was justified. After being repeatedly pressed by Jake Tapper, he admitted that he had once served as an "informal" adviser to the Russia government but that it was unreasonable to say that he was wittingly or unwittingly working for them during the campaign.

It may be that Page is innocent of the charges. But after reading the warrant application there is little doubt that the government had ample reason to be suspicious. And after Trump's performance in Helsinki last week, all the suspicions about Russian involvement in the election have risen to new levels, so Page's protestations ring even more hollow.

Republicans in Congress demonstrated their spinelessness once again. Sen. Lindsey Graham, R-S.C., played dumb on "Face the Nation," saying, “If the dossier is the reason you issued the warrant, it was a bunch of garbage. The dossier has proven to be a bunch of garbage.” He obviously hadn't read the documents or he would have known that the dossier wasn't the principal reason they issued the warrant. Clever of him to put it that way though.

Sen. Marco Rubio, R-Fla., was more rational, telling Tapper on CNN that he didn't think the FBI “did anything wrong. I think they went to the court. They got the judges to approve it. They laid out all the information ― and there was a lot of reasons . . . for why they wanted to look at Carter Page." He hemmed and hawed about the implications, but at least he acknowledged reality.

Other Republicans are diving deeper into the rabbit hole. National Review's Andrew McCarthy is all the way in, calling for the investigation of the Republican judges who signed the warrants:

After years of practice, Republicans have developed a knack for inventing scandals and getting the press to buy into them. Normally such scandals only involve Democrats, but Trump's Russia collusion scandal requires a bit of fancy political jiu-jitsu. It remains to be seen whether they can pull it off. The formerly patriotic staunch defenders of law and order have had to turn on a dime and convince their voters and the media that the American justice system has engaged in a corrupt conspiracy against Donald Trump and created this Russia conspiracy theory out of whole cloth.

In this case, right-wingers latched on to an old leftist trope about the "deep state," meaning the intelligence apparatus and other aspects of permanent government, and are running with it as if they were the second coming of Noam Chomsky. They feed the press cherry-picked bits of paranoid nonsense, which are then floated into the ether, supposedly providing a basis for an "investigation." Regardless of the actual outcome, millions of people will be convinced that there is merit to the charge because "if there's so much smoke, there must be fire." Millions more will listen to Trump's lies and believe them.

If these Republicans were acting from a set of constitutional principles, these concerns about the civil liberties of Trump campaign officials might wake them up to the offenses commonly committed against Muslim suspects and the ill-treatment of immigrants as well as other outrages of the American "carceral state " Unfortunately, this is a one-time deal. It seems that wealthy Republicans are the real victims and the only true citizens whom the Bill of Rights was intended to protect.

Former Maryland Gov. Martin O'Malley on what went wrong in 2016 and the challenges that now face Democrats.