Could overturning Roe v. Wade lead to a nationwide abortion ban? It's possible

Overturning Roe wouldn't just return abortion to the states. It might empower Congress to pass a national ban 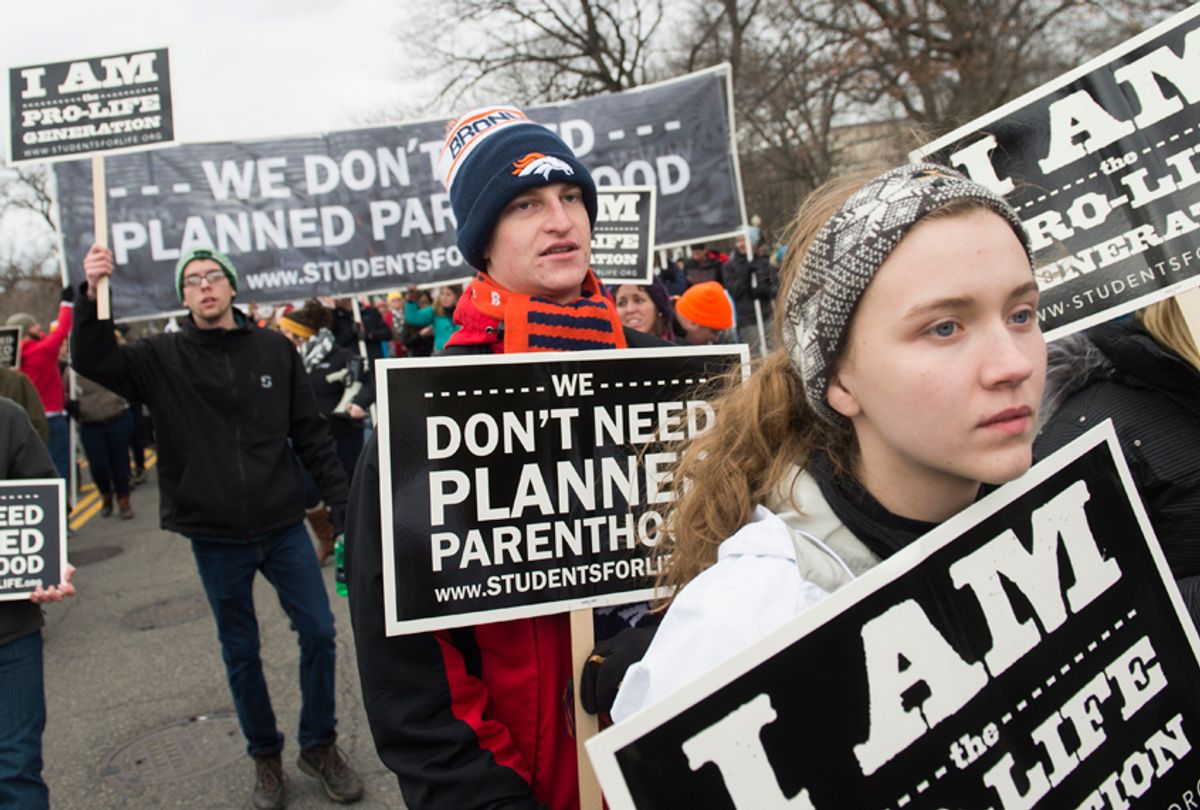 If Donald Trump's nominee, Brett Kavanaugh, is confirmed to the Supreme Court, then one thing is nearly certain: Roe v. Wade, the 1973 decision guaranteeing abortion as a right, is done for, either by a direct overturn or by a decision that allows the government to use red tape to make legal abortion impossible to provide. That will likely happen quickly. As Tierney Sneed at Talking Points Memo reports, there are "some four dozen abortion cases already in the legal pipeline, and more than a dozen of them at the appeals court stage." So the Supreme Court will soon get its chance to gut or overturn Roe.

When this happens, the common wisdom holds, the issue will be returned to the states, with the likely result that some states will ban abortion and others will not. But this common wisdom contains a major flaw. In truth, the rightward shift of the Supreme Court -- and the entire judicial branch -- isn't just a threat to reproductive rights in red states. It could open the door to a national assault on abortion rights.

The idea that the end of Roe just leaves the issue to the states has become a comforting myth to those who don't particularly care about low-income or geographically isolated women but want reassurance that people like them will still have abortion access. In a recent piece in The Washington Post, Megan McArdle scolded feminists to accept "permissive in New York and illegal in Alabama" on the grounds that politics is "both sides settling for less than what they want."

(This compromise appears to be exactly what McArdle wants, however. It appears that political compromise, like losing your right to abortion, is something for other people to endure.)

READ MORE: “We have come to take your daughter”: An immigrant parent’s traumatic separation from her child

This line that a Roe overturn would only return the issue to state legislatures is popular with right-wing pundits because their audience, much as it enjoys castigating other people for having sex, has no intention of giving it up themselves. "Leave it to the states" lets conservatives believe they would continue to have access, even if they have to travel to New York or California, while denying it to women they believe are less worthy.

But there is no real reason to think this issue would be left to the states. On the contrary, with Kavanaugh on the the bench, Republicans in Congress and in the Trump administration could move swiftly, if they wish, to place severe limits on women's reproductive rights nationwide. Congress could even pass a bill banning abortion in all 50 states — and Trump, who owes considerable payback to the religious right for holding its nose and supporting him, would likely sign it.

Whether or not Congress has the legal right to pass an abortion ban in the event of a Roe overturn was an open question for decades, to be clear. As Amy Myrick, a judicial strategist for the Center for Reproductive Rights, told Salon, Congress "needs some kind of enabling authority" to pass such nationwide laws.

In 2003, congressional Republicans, with a signature from President George W. Bush, decided to test whether the federal government had that authority by passing a national ban on a specific kind of abortion procedure, which they misleadingly termed "partial-birth abortion," that doctors sometimes used for late-term abortions, primarily because it was safer for the patient. In 2007, the Supreme Court upheld the ban.

“The so-called partial birth abortion ban was held to be a proper exercise of Congress’ authority and upheld as constitutional, so that model is out there," Myrick said, though she believes that "every nuance of what allows Congress to pass a law" is still in question and pro-choice lawyers would have some leverage to challenge a national ban on abortion.

That, of course, is why the make-up of the Supreme Court matters so much. The same court that overturns Roe in the face of a state-level challenge would almost certainly be willing to uphold a national abortion ban, especially in light of the 2007 precedent that established the congressional power  in question.

Many experts believe it's unlikely, however, that anti-choice forces will be so blunt as to have the court directly overturn Roe or that they would follow that up immediately with a national ban on abortion — although that possibility should never be discounted entirely.

“I think the greater risk is stripping away at access to abortion both at the legislative level and through the administration," said Susan Inman, who works on federal policy for the Center for Reproductive Rights. We could see "regulations and bills that undermine access, undermine coverage, in a way that functionally eliminates access to abortion," she continued

As Sneed's article in Talking Points Memo outlined, Republicans are passing a series of state laws that severely restrict abortion without banning it outright, though many of these laws — such as a six-week gestational limit — are so restrictive that they may as well be an outright ban. Others, such as a law requiring women to pay for burial services if they get an abortion, are about making the procedure too onerous or too expensive. Either way, litigation around the issue could give the court an opportunity to rule that abortion restrictions that fall short of an overt ban are OK.

If the court does that, then all Congress has to do is keep on passing increasingly restrictive laws until, before the public knows it, women are only allowed an abortion if they endure a 10-month waiting period, or some other bad-faith restriction that is effectively a ban-without-a-ban.

The best hope for pro-choice advocates, Inman argued, is to elect a Congress with enough pro-choice members that this can never happen. She pointed out that "these types of bans are regularly introduced" on a federal level — last year, the House even passed a bill banning abortion at 20 weeks — but typically die in the Senate because there simply wasn't the political will, or the votes, necessary to pass it.

Ultimately, the entire story of abortion rights in the United States underlines the importance of voting, instead of relying on the hope that the courts will forever protect human rights. After decades of having disproportionate levels of power due to structural advantages and liberal complacency, Republicans have been able to remake the courts so that abortion rights are in danger of not just losing protections but being eliminated nationwide at a federal level. There is a simple remedy: electing representatives who will protect or even strengthen abortion rights.