"No one is working," a News staffer told Salon after the deep cuts were announced by owner Tronc on Monday morning 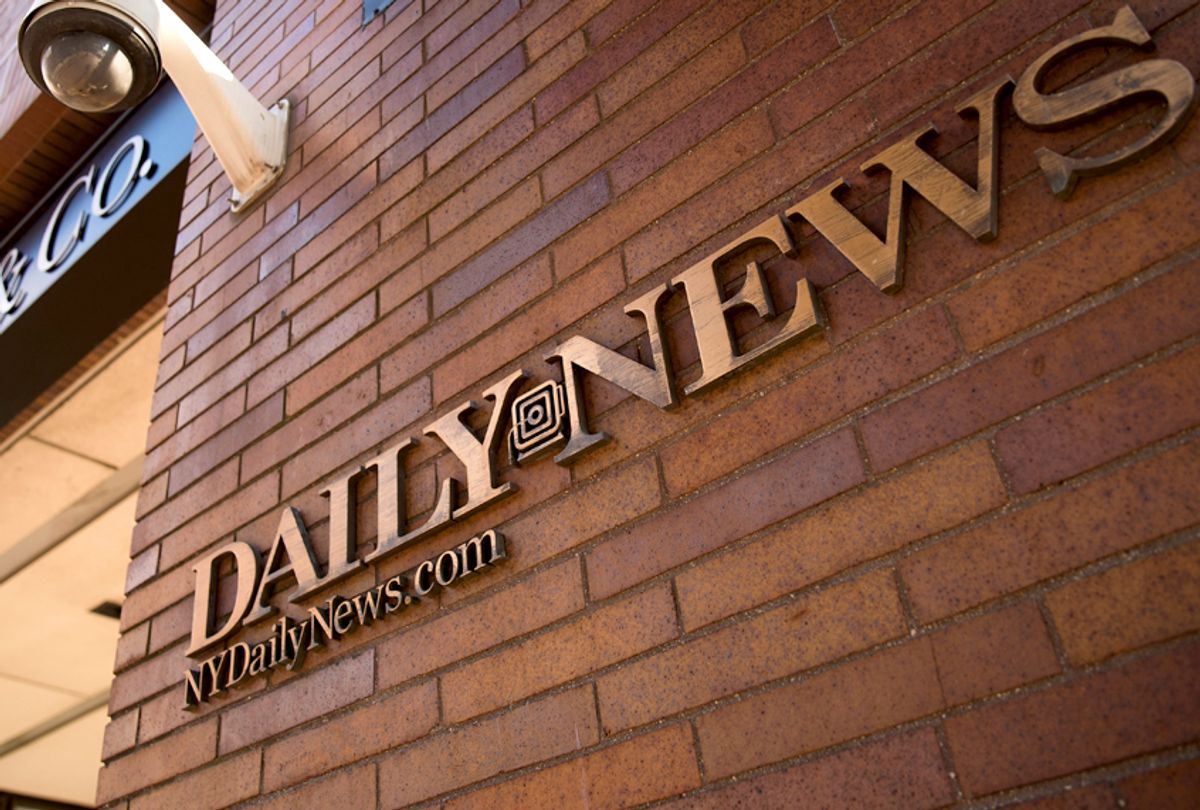 The New York Daily News, a celebrated city tabloid known for its provocative front pages, slashed half of its newsroom staff on Monday — a move the paper's outgoing editor-in-chief slammed as a win for individuals who "hate democracy."

An email sent to staffers on Monday morning announced that the paper is struggling with "significant financial challenges," and its parent company Tronc was "fundamentally restructuring the News." The unsigned email was issued by Tronc's "talent and engagement" team.

"We are reducing today the size of the editorial team by approximately 50 percent and re-focusing much of our talent on breaking news — especially in areas of crime, civil justice and public responsibility," read the email. "We know our readers look to us for a unique point of view, and we believe these topics offer our best opportunity to differentiate our reporting. We will, of course, continue to cover local news, sports and other events, but our approach will evolve as we adapt to our current environment."

The email said the staffers "exiting the business will leave immediately," although "they will continue to be paid for the next 90 days and be eligible for transitional benefits after that."

According to a News staffer, the local paper had about 85 newsroom employees prior to the announced cuts.

"No one is working," the journalist told Salon in an interview on Monday. The "whole newsroom has been here since 9 a.m. just quietly discussing the layoffs openly."

Among those departing are high-profile names like Editor-in-Chief Jim Rich and Managing Editor Kristen Lee. Robert York, the publisher and editor of The Morning Call – a Tronc-owned daily newspaper in Allentown, Pennsylvania – will step in to head the Daily News beginning on July 30.

Late Sunday evening, Rich expressed his displeasure with the changes at the daily, tweeting: "If you hate democracy and think local governments should operate unchecked and in the dark, then today is a good day for you."

Rumors of the cuts began circulating on Thursday, and Tronc later sent an email to staff on Saturday telling them to "plan to be in the New York newsroom on Monday at 9 a.m. for an important message from Grant Whitmore," who is the general manager of the company's eastern region.

According to the staffer who spoke with Salon, Whitmore held a "30-second meeting" with employees prior to announcing the layoffs, in which he said: "Bear with us, today will be difficult."

The notice said that human resources would notify all of those impacted by the cuts by the end of the day.

Tronc added the Daily News to its seemingly-expanding catalogue of newspapers last year after it was sold by the paper's longtime owner, media and real-estate mogul Mort Zuckerman. Zuckerman had tried to sell the financially-troubled daily for years. In a sign of the paper's eroding circulation, the deal was struck for only $1.

After Tronc acquired the paper, it "began a restructuring that eliminated many New York-based positions and centralized some roles in Tronc’s Chicago headquarters," HuffPost reported. In February, the tabloid was also slammed with a sexual harassment scandal that resulted in the firing of two of its top editors.

The News, which has won 11 Pulitzer Prizes throughout its 99 years of existence, has faced many of the same challenges as the rest of the waning newspaper industry over the past few decades. It was brought out from bankruptcy in 1993 after nearly going under. The paper's print circulation has been dropping significantly, showing steeper declines than its chief rivals: the New York Post and the New York Times.

Monday was not the first time The News announced deep cuts. Under the ownership of Zuckerman, dozens of employees were let go back in 2015.

"You used to go into the office and feel the energy," Frank Isola, a sports columnist who has been at the local newspaper for nearly 25 years, told the Times. "I've probably been in the office, I would say, maybe three times in the last three years. People tell me, 'Don't come in, it's depressing.' They say there's nobody there."